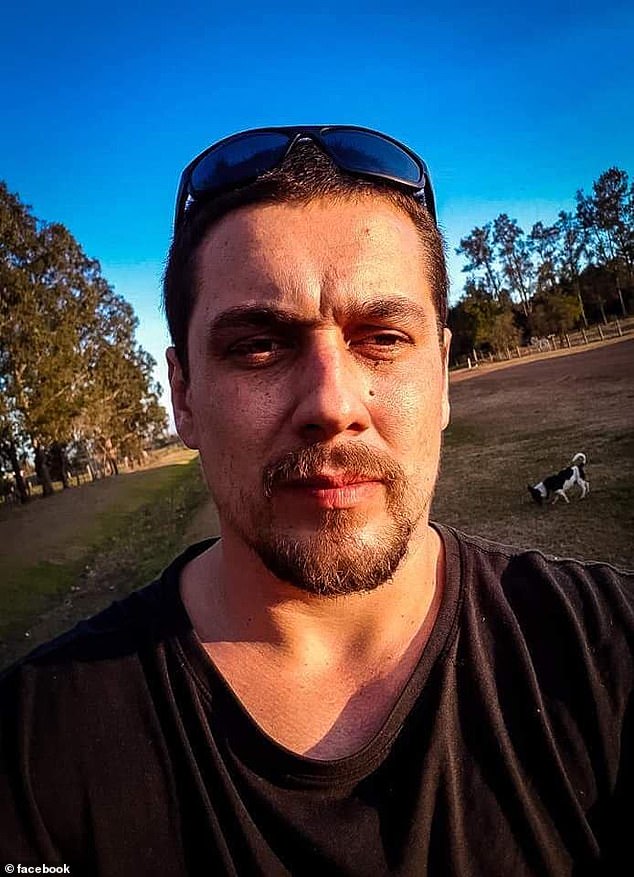 A father-of-two was killed when he and another motorist were mowed down by a truck as they traded punches in the middle of a highway.

Stephen Edwards was driving north in his SUV with his girlfriend along the Pacific Highway in northern NSW on Monday night when he was tailgated by a log truck.

The two drivers stopped in the middle of the road and confronted each other, their argument escalating into a fistfight in the other lane.

A truck changing lanes to avoid their vehicles crashed into them as they fought, killing both at the scene 5km south of Woodburn about 8.10pm.

Stephen Edwards was driving with his girlfriend when he got out of his car to confront another motorist, and was mowed down by a truck as they fought on the road 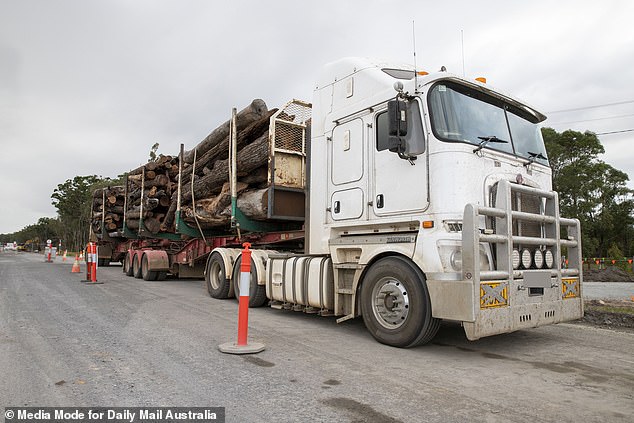 Mr Edwards is believed to have been tailgated by this log truck, whose driver was also killed when both were hit by the truck as they traded blows

Mr Edwards, aged in his 30s, was the father of a young son and daughter, and his girlfriend could only watch in horror as the truck ran him down.

His heartbroken father Noel Edwards paid tribute to his son, along with other devastated family and friends.

‘Rest In peace to a devoted father, son, brother and friend. We love and miss you forever son,’ he said.

His brother Wayne added: ‘Wish it wasn’t real Stephen but I do love you, never said it enough. I will always remember you miss you mate love you.’

Friends remembered Mr Edwards as a generous man with a ‘big heart’ who helped them get through tough times.

‘You always helped everyone out, you had a massive heart, you were a true gentleman and was a pleasure to have known you in my life,’ one said.

Another said: ‘I’ll never forget all the great times we had brother, you are a true friend, you inspired me to do better, learn more, try harder, and enjoy life.’

The winding stretch of road between Devil’s Pulpit and Broadwater is being upgraded with roadwork hours extended during the coronavirus pandemic.

Mr Edwards is originally from Tweed Heads and may have been on his way to visit family when he was killed. 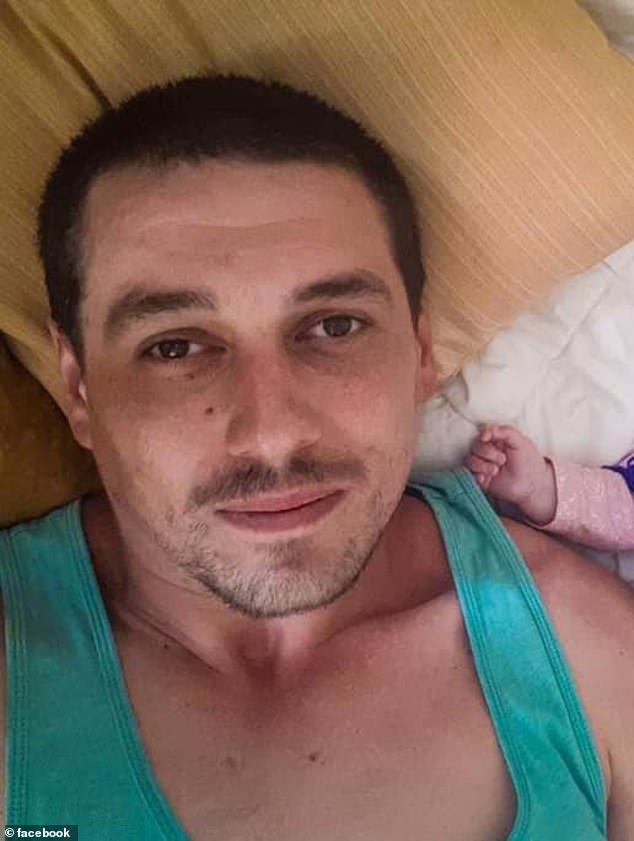 Mr Edwards, aged in his 30s, was the father of two young boys and his girlfriend could only watch in horror as the truck ran him down 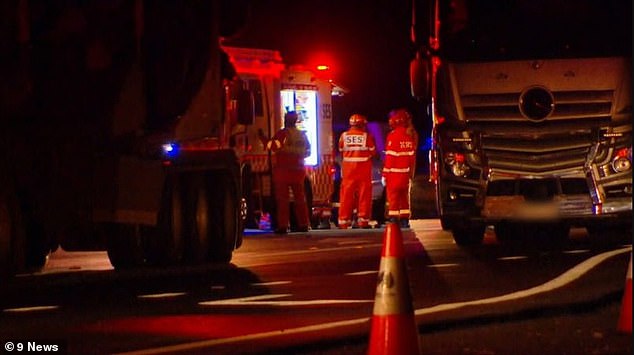 A passing truck crashed into them as they fought, killing both at the scene on the Pacific Highway in northern NSW

The truck loaded with wooden logs sits empty by the side of a lonely stretch of highway after its driver was mowed down beside it.

Richmond Police Chief Inspector Peter McKenna said the drivers did not pull over and instead stopped in the middle of the road to confront each other.

He said the driver of the truck that hit them changed lanes to pass the stopped vehicles and did not see the pair in the other lane until it was too late.

‘He has seen the stationary vehicles but unfortunately didn’t see the two males on the road – resulting in their fatal injuries,’ he said.

‘You can imagine for the officers attending that scene it would best be described as horrific.’

The log truck was behind the SUV and is believed to have been tailgating the smaller vehicle, leading to the brawl.

Chief Inspector McKenna said drivers should pull over if another vehicle was tailgating them, instead of confronting them.

‘Just pull over and contact police – there is nothing worth losing your life over,’ he said on Tuesday morning. 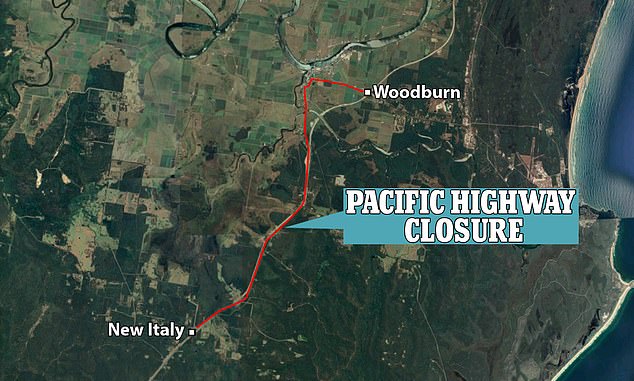 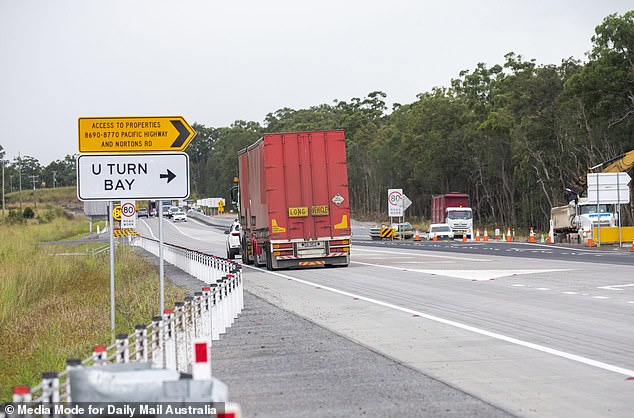 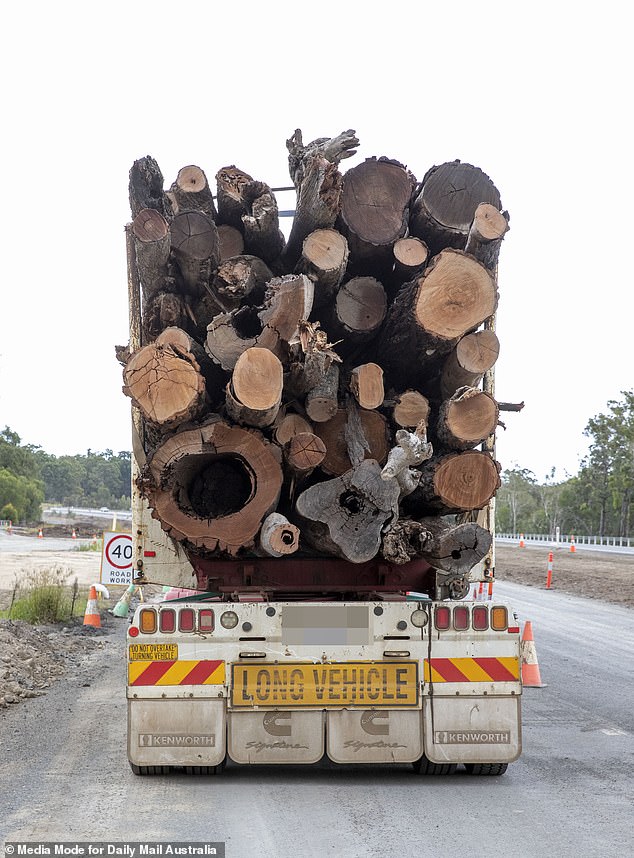 The driver of this semi-trailer carrying a load of logs is from Smiths Lake, aged in his 40s

A driver who arrived on the scene moments after the crash said he initially thought someone was having a heart attack.

‘A car was parked in the middle of the road with the hazard lights on and a woman was inside crying hysterically,’ he told the Daily Telegraph.

The witness, who asked not to be named, said a truck was parked behind the car with its hazard lights flashing.

‘I got out thinking she was upset because she may have got into a minor crash. Then I found out her partner was killed metres away, and he was still under the truck,’ he said.

The 35-year-old truck driver who hit the men wasn’t injured but was ‘hysterical’.

He was taken to Ballina Hospital for mandatory blood and urine testing.

Chief Inspector McKenna said police were reviewing dashcam footage of the crash and had the SUV driver’s partner as a witness, but appealed for more information.

A crime scene has been established and an investigation is underway to determine the circumstances surrounding the incident. 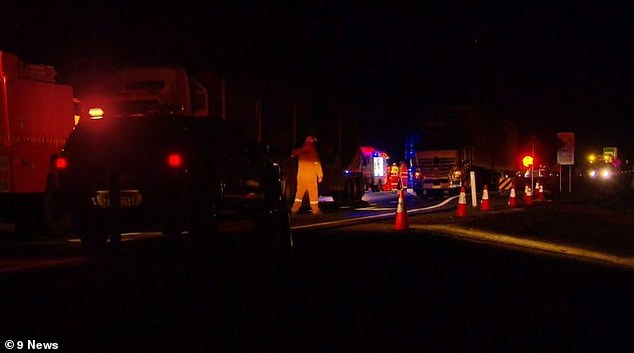 Police are now scouring the scene about 5km south of Woodburn