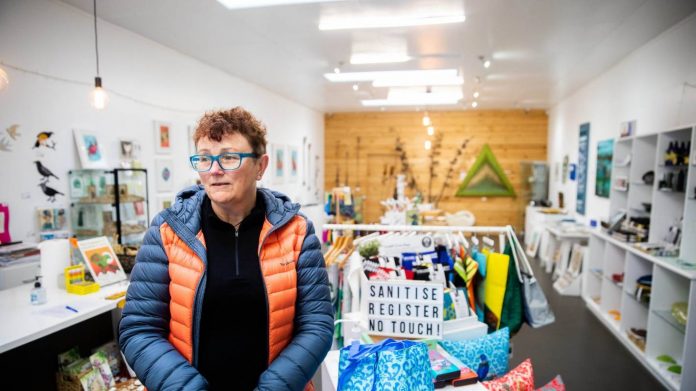 Karen Graves expected to find her shop a mess of broken glass and shattered dreams after the earth shook.

A strong 5.8-magnitude earthquake was centred 30 kilometres north-west of Levin at 7.53am on Monday.

Near the epicentre of the quake, Graves, 56, arrived at her store, bracing herself as she expected to find the delicate glass pieces destroyed.

After shutting Flax Gift Gallery on Foxton’s main drag for lockdown, finding her inventory in a mess was the last thing she needed.

But, thankfully, other than a few wonky paintings the artwork was intact.

“It was quite nerve-wracking to think that after the earthquake it could all be broken and destroyed… It is miraculous really.” Graves said.

“I hope everyone is the same because we don’t need that at this time.”

Striking out to sea, the shake was felt from Northland to Dunedin, with almost 37,000 people lodging reports to Geonet.

A series of weak and light aftershocks trembled over the following hours.

Graves was hopeful the 5.8 quake was the worst of it, but feared as the aftershocks grew in magnitude throughout the day that goods that survived the morning’s jolt would become casualties.

“It was pretty frightening and I have felt the aftershocks. I’m just hoping that that was the big one and there’s not another one coming. I feel like we’ve dodged a bullet.”

Although she had scraped by without a scratch, not everyone was so lucky.

Nik Ravelich’s flatmates sent him pictures of cracks that formed after the quake damaged his home in Shannon, about 16km north-east of Levin.

The 5.8 magnitude earthquake was felt over much of the country, seen here from Waitarere, near Levin.

Large rips in the wall showed the wallpaper torn apart, exposing gaps in the jibbing.

By 3pm, nearly 60 homeowners lodged a claim with the Earthquake Commission.

Denise Baker had been making her morning coffee in Foxton when she thought she heard a truck struggling to start outside, but when the concrete walls began to wave she realised it was more serious.

“I didn’t think it was going to stop and I didn’t know what to do, so I just ran outside.”

While nothing was amiss at her home, Baker’s friend’s dolphin ornaments had been destroyed.

Suzy Gordon, 46, was standing beside her racehorse, Phillip, just before the quake struck.

The horse froze for a moment before terror took over about 10 seconds before Gordon felt the tremor.

“I was putting his rug back on and he just freaked out,” Gordon said.

“It was like thunder. I just grabbed hold of him and I was waiting for the ground to swallow us both. I thought we were both going to go together.

“The whole stables were rocking. I don’t think I’ve ever felt one like that in my life.”

Horowhenua mayor Bernie Wanden was preparing for work when the quake struck.

“I certainly felt that. That was a pretty strong earthquake. You sort of forget how they feel after a while.”

Council officials in Horowhenua were on Monday checking buildings for damage.