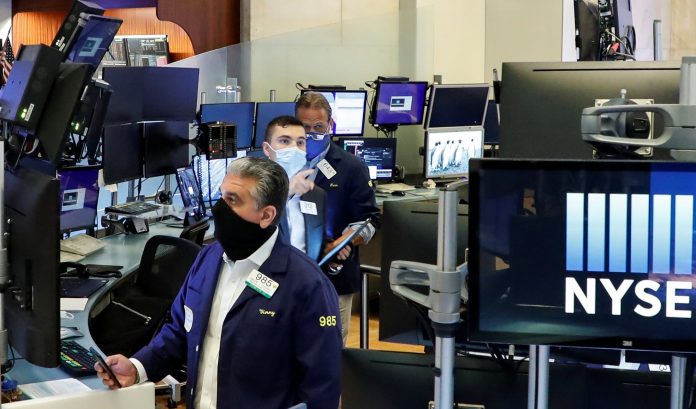 Traders wearing masks work inside posts, on the first day of in-person trading since the closure during the outbreak of the coronavirus disease (COVID-19) on the floor at the New York Stock Exchange (NYSE) in New York, U.S., May 26, 2020.

This is a live blog. Please check back for updates.

Shares of bankrupt companies were down big in morning trading on Wednesday after a wild run fueled by speculation by retail investors. Car renter Hertz dropped 36%, while Whiting Petroleum and J.C. Penney plunged 31% and 26%.  Chesapeake Energy, which is preparing for a bankruptcy filing, fell 30% after being halted for trading briefly. These names have seen their stock skyrocket in recent days as investors bet on a turnaround with the economic conditions improving suddenly. With Wednesday’s drop, shares of Hertz and Whiting are still up 180% and 130%, respectively, this month. However, many on Wall Street are warning against buying into those bankrupt names as equity holders are last in line for payout and typically get wiped out in bankruptcy. –Li

Shares of Starbucks ticked 4% lower on Wednesday after the world’s largest coffee chain said it lost as much as $3.2 billion in sales in latest quarter due to coronavirus pandemic. Starbucks, which withdrew its prior outlook in April, is forecasting a net loss per share of 64 cents to 79 cents and adjusted losses per share of 55 cents to 70 cents for quarter ending June 28. For the full fiscal year, the company expects same-store sales in its two largest markets — the United States and China — to decline 10% to 20%. Starbucks does expect earnings to improve in the fourth quarter. — FItzgerald

Tech shares reasserted their leadership on Wednesday, lifting the Nasdaq Composite to an intraday high of 10,027.50. Apple rose 1.3% in morning trading to a fresh record of $349.35 a share. E-commerce giant Amazon jumped another 2%, hitting an all-time high of $2,653.71. Facebook also refreshed its record, rising 0.6% on Wednesday. –-Li

9:40 am: Five Below soars after earnings

Shares of Five Below rose more than 11% on Wednesday after the company reported earnings for its fiscal first quarter and gave updates about business at its reopened stores. The company missed on the top and bottom lines for the quarter, but several Wall Street analysts cited the companies sales trends in the second quarter as a reason for optimism. The discount retailer’s CEO said on an investor call that comparable sales are up 8% in the second quarter so far, according to a transcript from FactSet. About 90% of the company’s stores have now reopened, and Five Below said it still plans to open 100 or more new stores this year.  —Pound

The S&P 500 started Wednesday’s session in the green, gaining about 0.2%. The Nasdaq Composite rose 0.2% to another all-time high as megacap tech built on its strong momentum. The Dow Jones Industrial Average was flat at the open as a drop in Boeing shares weighed on the benchmark –Li

9:20 am: Inflation dipped slightly in May

The consumer price index fell 0.1% in May, marking the third straight month of declines, Labor Department data showed Friday. The slight dip came after a 0.8% plunge in April amid the pandemic, which was the largest decline since December 2008. Excluding the volatile food and energy components, the so-called core CPI fell 0.1% in May after dropping 0.4% in April, the largest decline since the series started in 1957. “I still believe that with screwed up supply chains and a lot of capacity taken off line, as demand rebounds over the next 6-12 months, along with an extraordinary amount of monetary tinder, inflation will come our way,” Peter Boockvar, chief investment officer at Bleakley Advisory Group, said in a note. –Li

8:20 am: Fed to release economic projections after meeting

Federal Reserve officials will indicate where they see GDP, unemployment and inflation heading as the U.S. begins its recovery from the coronavirus pandemic. As the Federal Open Market Committee wraps up its two-day meeting Wednesday, markets are expecting little in the way of policy changes, but will get to see how policymakers see the recovery unfolding. In addition, the Fed will release its “dot plot” of individual members’ projections for interest rates. While there likely won’t be any shifts soon, the plot will give an indication on whether members see negative rates as a possibility. Chairman Jerome Powell will hold a news conference afterwards. –Cox

8:17 am: Bank of America raises price target on Alphabet, Facebook

Tech has been leading the market higher, and Bank of America believes these names will continue to outperform. On Wednesday the firm raised its target on Alphabet to $1,610 from $1,420 based on ad revenue and monetization trends. The new target is about 11% above where the stock currently trades. When it comes to Facebook, the firm believes the company “has strong ability to capitalize on the surge in usage seen during shelter in place orders.” The firm’s new $265 target represents 11% upside. Bank of America also raised its target on Pinterest to $24 to $22, and on Snap from $20 to $24. –Stevens

8:14 am: Tesla rises on report of scaling Semi truck production

7:35 am: United and JetBlue downgraded at JPMorgan, rally can’t last ‘much longer’

7:30 am: Dow futures dip ahead of Fed announcement, but Nasdaq set for more gains

Dow Jones Industrial Average futures fell 48 points, or 0.2%, as traders braced for an upcoming monetary policy announcement from the Federal Reserve. S&P 500 futures were also little changed. Nasdaq-100 futures, however, rose 0.5% as shares of Facebook, Amazon, Apple and Netflix traded higher in the premarket. Both the Nasdaq-100 and Nasdaq Composite are coming off record-setting sessions, with both averages breaking above 10,000 for the first time on Tuesday. —Imbert

Subscribe to CNBC PRO for exclusive insights and analysis, and live business day programming from around the world.