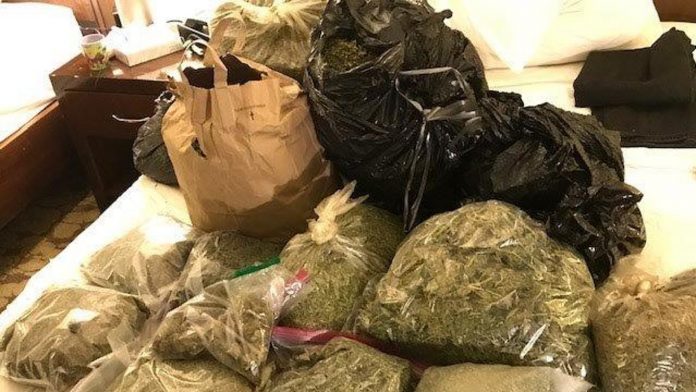 A stolen motorcycle spotted in Silver Strand on Saturday led Ventura County Sheriff’s detectives to a 40-pound stash of marijuana in an Oxnard hotel room, a hidden gun and the arrests of three West Virginia residents.

Detective Corey Nicholas and other members of the sheriff’s gang and narcotics units were conducting extra enforcement in the unincorporated Silver Strand area Saturday as part of an effort funded by a federal grant.

A patrol car equipped with a license plate reader alerted sheriff’s personnel to the presence of a stolen motorcycle in the beachside community, officials said.

Detectives located the motorcycle in the rear of a pickup truck parked in the 2500 block of Roosevelt Boulevard. The motorcycle had been reported stolen out of Northern California, Nicholas said.

Undercover detectives watched the truck and soon saw a man and woman get inside. The two were later identified as John Wells, 31, and Wendy Gibson-Mills, 53.

Authorities conducted a traffic stop and discovered a third person, a man identified as Joshua Posey, 39, who had been in the truck already, out of view of detectives, officials said.

Authorities reportedly found a loaded, compact semiautomatic handgun hidden in the truck when they searched the vehicle. Posey, a parolee, had a concealed holster in his waistband, officials said. The search also turned up about $2,500 in cash and signs of marijuana sales.

The three, all from West Virginia, were staying at an Oxnard hotel near Highway 101 and Rose Avenue. A search of their room allegedly turned up about 40 pounds of marijuana, additional signs of narcotics sales and air mail packaging, officials said. The street value of the marijuana was reportedly more than $500,000.

Wells and Gibson-Mills remained in jail Sunday night with bail set at $400,000 each. Posey was also in jail in lieu of $500,000 bail. All three are scheduled to appear in Ventura County Superior Court on Tuesday afternoon.

Gretchen Wenner covers breaking news for the Ventura County Star. Reach her at gretchen.wenner@vcstar.com or 805-437-0270.

Local coverage is only possible with support from our readers. Sign up today for a digital subscription.