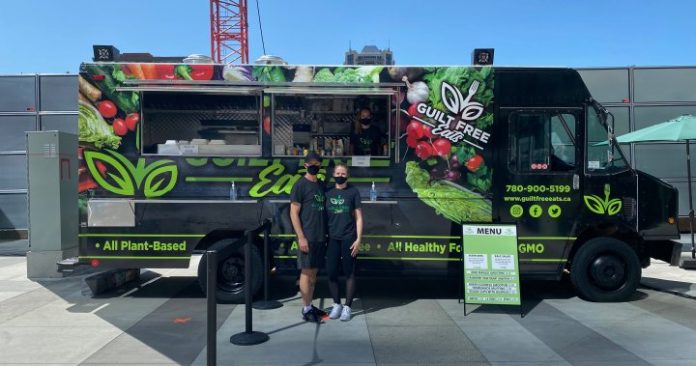 You can count some of the biggest names in hockey as frequent customers of a Stony Plain couple’s food truck.

Brianne and Charles Roberge are the owners of the gluten-free and vegan based food truck Guilt Free Eats. It’s currently based inside the NHL bubble.

A few customer names you may recognize?

He said his favourite player, Zack Kassian, is a frequent customer.

“He usually gets a smoothie. It’s funny, they have kind of girly names. So when this big tough guy comes up and says ‘Can I get the Sweetheart Smoothie?’ It’s pretty funny.”

Charles said the Vancouver Canucks and the Winnipeg Jets are the biggest fans of the truck so far.

“We have guys that come on a daily basis. There are a few players that are just so grateful that we are here,” Charles said. “There are restaurants here but that’s an hour-long process. This is just quick and easy.”

LISTEN: Brianne and Charles Roberge discuss life in the bubble on 630 CHED Afternoons with J’lyn Nye

As of Wednesday, the couple are now on Day 12 inside the NHL bubble.

“It’s rather neat to see these guys come up, talking to us like they are just regular people. It’s hard to not feel the fan-side of things. It is neat seeing them interact with each other. Teams will be chatting with each other, because they played with each other before. It’s neat to watch.”

Brianne said the atmosphere in the bubble is very friendly.

“As well, the teams get to watch everyone else play. This is an experience they never get. They never get a chance to watch two other NHL teams play each other,” Charles said.

Charles said they had been preparing to fully launch their food truck business before the pandemic hit Alberta. They had found the perfect truck, after three years of searching, in February. Then, COVID-19 health precautions shut down all the festivals the duo had planned on attending.

“About three weeks before we entered the bubble, we had started getting traction with farmer’s markets and such. Then we got the call [about entering the bubble],” Charles said. “They called us! We didn’t call them. That was a unique experience. Apparently some lady in New York had heard about us.”

The NHL contacted the Oilers Entertainment Group, which asked the couple to join the bubble and feed nearly 700 hockey players and 300 support staff.

The group was looking for vegan and plant-based options for those inside the bubble.

The truck is one of just three food trucks located in the sealed-off area beside the JW Marriott.

“Financially, it was the right choice. It’s also just a once-in-a-lifetime experience,” Charles said. “I still have a full-time job. I used my holidays and banked time to be here.”

Brianne said their staff are able to go home every night.

“Because we are event-staff and we have to get groceries and supplies every day, we have to be able to go home,” Brianne said. “We do have to get a COVID test every single day first thing. We are getting our temperatures taken every day and fill out a questionnaire.”

They are also required to wear masks at all times and maintain physical distance.

After they leave the bubble, they take extra precautions.

“We have a local grocery store in Stony Plain that prepackages all the food we need. We grab the stuff and out we go,” Charles said.

The contract is for three weeks, with an option to potentially extend it until October.

The couple agree the opportunity is life-changing.

“We were at the point one month into our truck where we didn’t know if we would hit next season. We were really worried about continuing the dream we have had for so many years,” Brianne said. “We know for a fact that we will be able to continue our dream into next season.”

Photos: Sunny, rainy and a little quirkiness during the coronavirus pandemic...