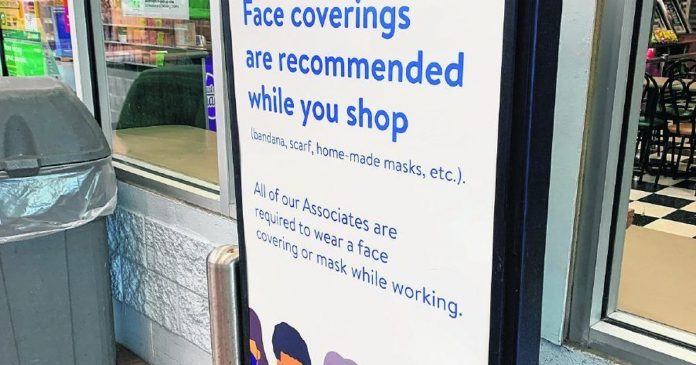 A sign at the entrance to the Greenfield Walmart asks shoppers to wear masks. Starting Monday, they’ll be required. (Staff photo)

GREENFIELD — Many shoppers in Greenfield will be required to wear face coverings starting Monday, July 20, in an effort to prevent the spread of COVID-19.

Walmart announced Wednesday, July 15, that it would require masks in its stories starting on Monday. Hours later, Kroger and Kohl’s stores followed suit.

“As the number of confirmed cases has spiked in communities across the country recently, so too have the number and types of face covering mandates being implemented,” the Walmart executives said in their blog. “Currently about 65% of our more than 5,000 stores and clubs are located in areas where there is some form of government mandate on face coverings. To help bring consistency across stores and clubs, we will require all shoppers to wear a face covering starting Monday, July 20.”

Walmart also reported it has created a “health ambassador” role in its stores: Employees will be stationed near store entrances to remind those without masks of the new requirements. Stores will have a single entrance as well.

Walmart, Kroger and Kohl’s, which have stories in Greenfield, join a growing list of retailers that have instituted mask mandates throughout their chains. While new infections in Indiana and Hancock County have remained fairly stable the past few weeks, they have skyrocketed in places that ended all restrictions on interactions in late May and June.

Given Walmart’s clout as the largest retailer in the U.S., its decision is expected to push others to issue similar mandates. Announcements by Cincinnati-based Kroger and Wisconsin-based Kohl’s came within hours after Walmart’s.

At the Greenfield Walmart Wednesday afternoon, at least half of the shoppers in the grocery section of the store were not wearing masks. Those who were tended to be older people, who are at higher risk of serious illness from infection. Traffic was fairly light inside the store, with no lines at the checkout stations.

A little earlier in the afternoon, Jenny Brewer stopped for some shopping. She said she isn’t happy with the company’s decision.

“That’s your right if you want to wear one or not,” she said as she pushed her grocery cart through the parking lot. “But what are you going to do? There’s not a lot you can do about it.”

Brewer also questioned why Walmart waited several months into the pandemic to start the mandate. She added that she only wears a face covering in public if it’s required.

Joe Firsich said he didn’t think the new rule was too big of a deal as he and his wife, Jennifer, loaded bags into their truck outside Walmart Wednesday afternoon.

“I don’t think it’s necessary, but better safe than sorry,” he said. “It’s not that big of a hassle. Seems like a pretty simple thing to do to protect everyone.”

He said they didn’t wear face coverings in the store on Thursday, adding it wasn’t too busy. They had masks on the dashboard of the truck, however, just in case.