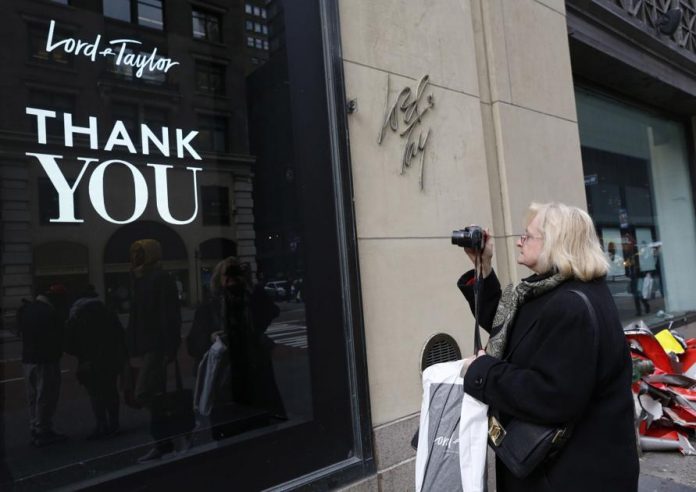 Lord & Taylor goes out of business

NEW YORK — Lord & Taylor, one of the country’s oldest department store chains, is going out of business after filing for bankruptcy earlier this month.

The retailer was sold just a year ago for $100 million to Le Tote, a San Francisco online clothing rental company, by Canadian parent Hudson’s Bay Co.

Lord & Taylor will permanently close its remaining 38 stores and shut down its website, the company said Thursday. It is currently holding going out of business sales in stores and online.

Founded as a dry goods store in 1826, Lord & Taylor has struggled for years as more people shop online and in other stores.

NEW YORK — MGM Resorts is laying off 18,000 people as an unchecked pandemic leaves economic scars across a broad swath of U.S. industries, particularly those that rely on healthy crowds of people.

The layoffs amount to about a quarter of its U.S staff.

MGM furloughed 62,000 of its 70,000 employees when casinos in Nevada were forced to close on March 17. Many of them opened again in early June, but mandated capacity controls are in place.

MGM, with properties in Mississippi, Massachusetts, Michigan, New York and overseas in Macao, has brought back workers, but with 50% capacity limits, fewer workers are needed. Two properties, one in New York and one in Las Vegas, are still closed.’

ATLANTA — Coca-Cola is offering voluntary buyouts to about 4,000 people to reduce the number of layoffs it says will take place as it streamlines operations.

Coca-Cola is reducing the number of its individual business segments from 17 to nine, which it said Friday will result in “voluntary and involuntary” staff cuts.

The streamlining is taking place during a rough stretch for Coca-Cola and almost all companies that cater to social events.

Half of Coca-Cola’s sales come from stadiums, movie theaters and other places where people gather in large numbers — venues that have been closed during the coronavirus pandemic. Revenue tumbled 28 percent in the company’s most recent quarter.

The initial round of offers will go to people working in the United States, Canada and Puerto Rico with the most-recent hire date of on or before Sept. 1, 2017.

Expenses related to the severance programs are expected to be between about $350 million to $550 million.

Consumer spending ticks up in July

WASHINGTON — U.S. consumers increased their spending by 1.9 percent last month, a dose of support for an economy struggling to emerge from the grip of a pandemic that has held back a recovery and kept roughly 27 million people jobless.

The July gain marked the third straight monthly increase in consumer spending, the primary driver of the U.S. economy, but represented a slowdown from the previous two months. Friday’s report from the Commerce Department also showed that income rose 0.4 percent in July after two months of declines.

DETROIT — Fiat Chrysler is recalling over 186,000 Ram pickups and is telling owners to take them to dealers because floor mats can interfere with the gas pedals.

The company said Friday that owners should remove the all-weather mats if there’s not enough space between them and the gas pedals, or if they can’t get to a dealer quickly. Also covered are more than 43,000 mats sold after trucks were purchased.

Fiat Chrysler said a customer reported that a mat interfered with the gas pedal while a truck was being driven, causing unwanted acceleration. The customer stopped the truck by stepping on the brake. All FCA vehicles since 2011 have brake-throttle override, which cuts the throttle and allows the brakes to overcome acceleration if both pedals are pushed at the same time.

Fiat Chrysler said it has no reports of crashes or injuries. The company says about 1 percent of the recalled vehicles will have the problem.

Owners will be notified by mail in mid-September, and dealers will modify the mats until shipments of reconfigured replacement mats arrive.

HONOLULU — The Hawaii Tourism Authority says visitor arrivals to the islands in July fell by almost 98% when compared to the same month last year.

A report released Thursday says 22,562 visitors arrived by air last month, compared to the 995,210 travelers who arrived in Hawaii in July 2019.

Most of the visitors last month were from the U.S. mainland — only about 2,100 were from international locations.

For the first seven months of the year arrivals plummeted nearly 65%.

All arriving visitors are subject to a mandatory 14-day quarantine, a measure that for months seemed to keep the coronavirus at bay in Hawaii.

But now, after the local economy began to reopen and restrictions eased earlier this summer, Hawaii is seeing a surge in COVID-19 cases, spurring yet another round of stay-at-home orders and business closures.

The restrictions, coupled with generally fewer vacationers amid the pandemic, have decimated the state’s tourist-based economy.

Air service to the state was down about 87% in July. No cruise ships are operating.