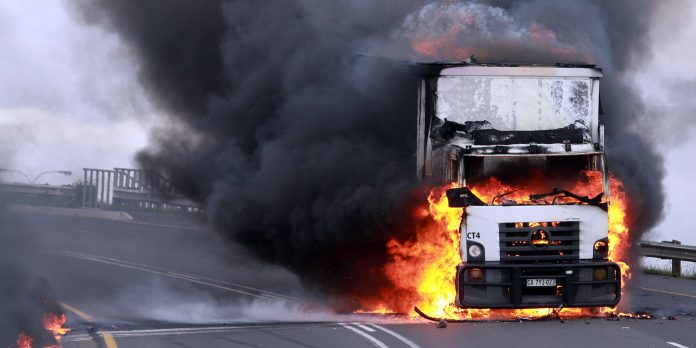 The stand-off between South African and foreign national truck drivers has culminated in violence, with trucks being set alight and drivers intimidated. One was recently assaulted in Margate in KwaZulu-Natal.
. (Photo: Gallo Images / Nardus Engelbrecht)

An organisation of South African truck drivers has been pushing for companies not to hire foreign drivers. The All Truck Drivers Foundation (ATDF) argues that non-South African drivers are being given preference when it comes to employment.

A protest by ATDF members entered its third week after the organisation hit the brakes on transport operations on 7 July, and rallied others to support the strike.

Tensions between local and foreign truck drivers have simmered for years, with the situation flaring up in June. The stand-off between drivers has culminated in violence, with trucks being set alight and drivers intimidated. One was recently assaulted in Margate in KwaZulu-Natal.

The ATDF considers KZN to be its home province. It’s where leader Sipho Zungu hails from.

There were fears that the strike action could affect distribution of personal protective equipment (PPE) and other items needed in the fight against Covid-19.

Speaking to Daily Maverick on 19 July, ATDF spokesperson Michael Masimini confirmed that the strike was continuing. He added that negotiations were ongoing, but that it was premature to disclose details.

“As I speak to you now, there are very serious meetings currently going on at national level.”

In March, the ATDF argued before an inquiry into violence in the long-distance truck and freight industry that local drivers needed to be prioritised when it came to employment. The inquiry is being conducted by the SA Human Rights Commission.

At the inquiry, commission chair Angie Makwetla said that in 2018, more than 200 non-nationals working in the road freight industry were killed. She said some died after petrol bombs were thrown at their trucks. Others were shot, stoned or stabbed by groups of people claiming to be South African truck drivers.

Makwetla said that in 2019, 68 incidents of violence against trucks and drivers were reported. There were 18 deaths.

The Road Freight Association’s (RFA) Catherine Larkin said they were aware of six vehicles being burnt in the latest protests. Incidents of violence were reported in Mpumalanga, Cape Town and KZN.

“As of 16 July there were cases of shootings and assaults. SAPS is also in the process of collating such reports,” Larkin said.

The ATDF’s Masimini acknowledged that drivers were angry. “When you see trucks being damaged, we don’t know who is damaging them. What we know is that it is angry drivers,” said Masimini.

The group’s Facebook page calls “for all SA citizen truck drivers to join and unite to save our jobs from being taken away from us to the foreign nationals”. The page, created three years ago, had 6,508 members as of 21 July.

Masimini denied that its members were xenophobic.

He said that the ATDF and other transport organisations had resolved to take the government to court for what it says is a violation of labour laws.

“Employers who have foreign truck drivers… are in contravention of Section 8 1(a) of the Employment Services Act and Section 2 2(a) of the Immigration Act.”

Asked if there were enough local truck drivers in the country, RFA labour relations manager Magretia Brown-Engelbrecht said: “We believe that there are. However, certain circumstances require special provisions or skills.

“Many companies operate cross-border and it may require employment of foreigners since they are familiar with that country and speak the local language. In such instances, requirements as per the Labour Relations Act will have to be met to employ such individuals.”

Brown-Engelbrecht said that truck drivers were employed in accordance with the required licence.

The ATDF, however, maintains that driving is not a scarce skill and that foreign drivers are being hired illegally. In a 7 July meeting with unions and Employment and Labour Minister Thulas Nxesi, the organisation told Nxesi they want foreign drivers “off the trucks”.

According to the ATDF, Nxesi said the government would amend the labour laws to introduce a new quota of 60% local drivers to 40% foreign nationals. This was rejected by the ATDF.

Masimini said the organisation had been engaging the government since 2018 to no avail.

Nxesi’s spokesperson, Sabelo Mali, said the minister had directed all parties within the industry to deal with grievances through the bargaining council.

Someone claiming to be a truck driver posted a WhatsApp message warning foreign truck drivers. “You colluded with this corrupt government and now you want to fight us for what rightfully belongs to us? I guess the answer will be no. So please do yourselves a big favour by jumping off those trucks or else?”

“Currently such engagements are progressing very well, including the hiring quotas. It is important to make it clear that Minister Nxesi cannot unilaterally pronounce on hiring quotas without discussing it with other affected departments.” Mali said the matter was under discussion in Cabinet.

Meanwhile, there are signs that anti-foreigner sentiment is again on the rise. In recent weeks, xenophobic messages have been circulating on social media platforms.

One was in the form of a poster, calling on South Africans to stand up and fight against “the abnormal influx of illegal foreigners in our country”. The message also called for the closure of all foreign businesses in the townships and mass deportations of foreign nationals.

Someone claiming to be a truck driver posted a WhatsApp message warning foreign truck drivers. “You colluded with this corrupt government and now you want to fight us for what rightfully belongs to us? I guess the answer will be no. So please do yourselves a big favour by jumping off those trucks or else?”

The poster of the message said the strike would continue “till the day we see you out and off those trucks”.

Police spokesperson Lirandzu Themba said authorities were closing in on those suspected of violence in the road freight industry.

There are special investigative detective teams probing these cases in the affected KZN, WC, Gauteng and MP provinces,” said Themba.

“The Ministry of Police wants to emphasise that law enforcement on this truck matter is not a lasting issue, but rather that the arms of the inter-ministerial committee and relevant stakeholders must come up with more permanent solutions.”

Professor Loren B Landau of the Wits University’s African Centre for Migration and Society, said anti-foreigner sentiments had been around since the 1990s.

“Over the past few years, what was fringe scapegoating has now moved to the centre of politics,” he said.

“The truck drivers, Herman Mashaba’s and even Tito Mboweni’s demands to put South Africans first are all signs of this. As the ANC and other parties become desperate to distract from the failures of delivery, they are looking for someone to blame.

“At the local level, citizen desperation – heightened by the pandemic – heightens support for those offering explanations and quick wins,” Landau said.

He added that the Covid-19 pandemic was not linked to the latest xenophobic flare-up.

“Covid-19 is neither the source of South Africa’s current economic crises nor the hostility to foreigners. What it has done is exacerbate structural inequality and exclusion, while empowering discourses of blame that capitalise on people’s discontent and righteous anger.”

Landau warned: “Covid-19 will eventually pass. Unless the country addresses its structural inequality and anger, xenophobia will not.” DM

Please note you must be a Maverick Insider to comment. Sign up here or if you are already an Insider.