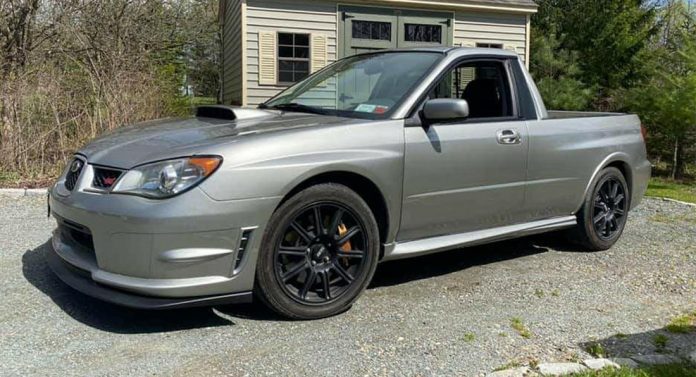 Just a few days ago, we brought you images of a bizarre Dodge Dakota sporting the front and rear fascias of a Charger. Now, we have stumbled upon another weird pickup truck from the same company, Massachusetts-based Smyth Performance, built around the Subaru WRX.

The images of the silver Subaru WRX depict a hawk eye-generation model that’s been converted into a pickup truck. It’s unclear if the WRX in question started out life as either a sedan or a wagon model but either way, we suspect the process of turning it into a pickup wouldn’t have been easy.

For starters, the roof has been cut and the rear seats have been removed to make way for a bed which, by the way, looks quite generously sized.

Smyth Subaru WRX ute conversion kit outside the factory waiting for snow, thx for all the help getting the word out…humbled by all of your help. Mark Smith smythkitcars.com

This isn’t the only Subaru WRX that’s been converted into a pickup thanks to Smyth Performance. There’s also a blue, bug-eye example in the United States complete with a set of flared wheel arches. We happen to think both WRX pickup conversions look pretty neat and while the owners could have difficulty selling them if ever needed, owning a WRX pickup is certainly one way to stand out.

Smyth Performance isn’t the only one to have transformed the WRX into a pickup. Back in 2016, Australian YouTubers Mighty Car Mods built their own WRX pickup based on a wagon version of the bug-eye generation. That car was fittingly dubbed the ‘Subarute’ and used in a series of challenges against the guys from Roadkill.