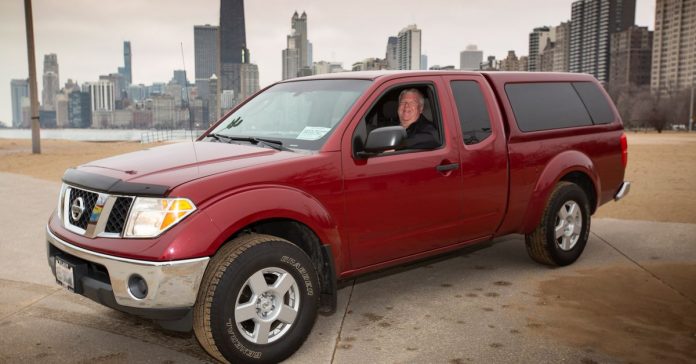 Some people trade in their vehicles every year. Brian Murphy prefers to get his money’s worth out of the old one.

Fortunately for the auto industry, few take that challenge as seriously as Murphy, who earlier this year surpassed the 1 million-mile mark on his 2007 Nissan Frontier pickup truck.

Rather than take offense over Murphy’s thriftiness, Nissan plans to reward him Tuesday with a new 2020 model Frontier. Now, that’s getting your money’s worth on a trade-in.

I don’t pretend to be a car guy. But I realize the million-mile mark is hallowed ground for serious car guys, an exclusive club not unlike Major League Baseball’s 3,000-hit club.

Reaching it requires a special kind of determination, durability and luck on the part of man and machine.

Among the most impressive aspects of Murphy’s achievement is that he did it while driving almost entirely in Chicago traffic and weather. And his truck still has its original four-cylinder engine and five-speed manual transmission.

Murphy, 63, lives in McHenry County less than 10 miles from the Wisconsin border. He uses the truck for work as an independent delivery driver.

Every work day starting at 5:45 a.m., Murphy heads from his home in rural Ringwood to an operations base in Geneva where he picks up a load of copier parts and supplies before heading downtown to make deliveries in the city.

Then, it’s back to Geneva by midday for more assignments. Before the pandemic, Murphy typically drove 12 to 13 hours a day five days a week, piling up 300 to 400 miles daily.

“If I bought a good truck and I really took care of it, I thought I could do it, and it would be a big achievement,” he said.

Having gone into business a few years earlier, Murphy also figured he could avoid the expense of a new truck every few years.

With the Frontier, Murphy did his own oil changes at 10,000-mile intervals — not more frequently because he piled up miles so fast he still was changing it as often as every six weeks.

For other maintenance, Murphy relied on the Crystal Lake dealership where he bought the truck.

The alternator made it 436,000 miles, the radiator about the same. Murphy replaced both again at 800,000 miles just to be safe.

But not in ways you might think. He washed the truck once a week but never bought the rust-protection package. His garage is unheated. And this really surprised me: “I never even waxed it, not even once.”

It still looks remarkably good, except for a little rust on the trailer hitch and right rear wheel.

I just took my 2010 Ford Escape for its emissions test and noted with pride that I’ll soon surpass 115,000 miles.

Then, I got home and read Nissan’s announcement about Murphy, which burst my bubble. I took it as a sign I should meet this man.

Speaking with him on his driveway, I told Murphy I considered asking him to pose lying down on the Frontier’s hood like a Chicago Auto Show model of yore.

“That would be very bad for the hood,” joked Murphy, who hopes to keep working until 70.

He hit the million-mile mark around 6 p.m. on Jan. 27. Nissan recorded the event for posterity.

He put only 500 more miles on it after that. Nissan gave him a delivery van to use while awaiting his new truck. Production was delayed by the pandemic.

Nissan plans to display Murphy’s Frontier at a Tennessee auto museum near where it came off the assembly line.

After spending as much time inside the truck as at home the past 13 years, Murphy might need visitation rights.