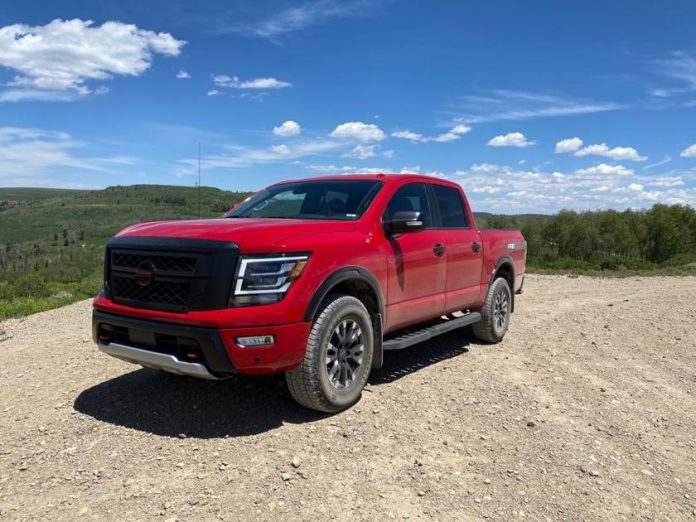 This year Nissan is at it again with an overhaul of its Titan truck, adding a new design, a class-leading stronger engine and standard technology in all models in the line.

Oh, and higher trim levels are as comfortable as can be, like other manufacturers, we would say high-end trucks are now on par with any luxury sedan.

Just two short years ago Nissan built and completely redefined the Titan, a move that at the time was sorely needed in a market that had seen others redoing their trucks on a much tighter schedule of every two to three years. So we were thrilled with the new additions and alterations on this year’s Titan!

With the competition fierce in the market for trucks in America, it seems that everyone is coming up with new features and additions to make their truck different and unique. There is everything from technology that will pretty much back up the truck with a trailer to attach, to talk of an all-electric truck with power beyond anything seen to date. But whether it will match up to the distance and capabilities of a regular gas-powered truck is yet to be seen.

Driving the Pro-4X is a unique experience especially when it is not the top trim level that Nissan has to offer in the Titan yet it is very well-equipped and an awesome climbing truck. Each year it seems there are more and more items drifting over from Nissan’s Infiniti line to all its models and the Titan is no exception to this phenomenon.

We noticed right away that the controls for heating and cooling the seats were the same as we have experienced with Infiniti. Yes, the leather-clad seating in the Pro 4X were both heated and cooled along with the steering wheel that was also leather-wrapped and heated. This would certainly make the early mornings of many Utah days much more tolerable.

Also new to the 2020 Titan across the entire lineup will be an 8-inch touch screen that will include NissanConnect SM that also has Apple CarPlay and Android Auto. However, Nissan has gone the extra mile with an optional 9-inch touchscreen that came in our test ride. This new screen is even higher resolution than standard HD using WXGA protocols.

We loved the larger, higher-definition screen as the smaller screen from the past was an issue, especially with the competition having at least an 8-inch screen. The new screen is set beautifully into the center of the dashboard within easy reach for the driver or passenger. The designers also have put a large 7-inch LED programmable driver information display in the center cluster for easy access to important information.

To this screen’s credit, the designers have added a centering line for help with backing up to attach a trailer, and the Titan is the first truck to come with a way to check all of the trailer lights automatically through and an added option with only one person in the truck. This is not only a great safety feature, it will keep marriages together as wives will no longer have to switch seats and make sure to press all the right buttons and pedals before a family adventure starts!

The Titan comes equipped with a 5.6-liter Endurance engine that is made in America and this year produces 400 horsepower and 413 ft.-lbs. of torque, will tow up to 9,370 pounds along with a payload capacity of 1,680 pounds. It is now mated to a new 9-speed transmission that proved to be a huge difference from last year’s 7 speed. The truck now accelerates better, both when cruising and from standing starts.

After over 400 miles of driving, we netted 17.1 miles per gallon for our week with the Titan which is right where the EPA puts that truck. This included a trip on Saturday down into Sanpete County via the Skyline Drive. We figured that it would not only be a beautiful excursion but also a great test of the 4×4 prowess of the new Pro4X Titan.

The first three hours of our journey off-road went entirely as planned with the Titan handling it all in stride with no problems at all. After coming to the junction up Fairview Canyon where a paved road started again, we decided to continue south and hopefully end up going down Ephraim Canyon after a few more miles on a drive that clings to the tops of the Sanpete mountains.

We were able to make it past the cutoff to head down the canyon into Mt. Pleasant, but about 2 miles further on we started to encounter snow still on the road and some really large mud flats. They were a great test for the Pro4X, with it not even missing a beat, plowing through them as if they were not even there.

After four of these snow/mud bogs on the high mountain road we came to a snow bank that was still about 6 feet deep with no way around and were forced to turn back, having to go back through all the mud again. We then decided to head down the canyon into Mt. Pleasant for a late afternoon meal. This canyon proved to be very steep and gave us the chance to use the included hill descent controls for about 2 miles, which of course worked to perfection.

Our Pro4X version also came with some other great technology additions that we would highly recommend. The all-around view monitor was awesome and also could be used at slower speeds when we were off-road. We always love radar intelligent cruise control to help out on longer drives, as we found making our way to start the Skyline Drive.

There was also Traffic Sign Recognition, Rear Door Alert for making sure everyone or thing was out of the rear seat, all great additions that we would want on our own truck.

Since the redesign of the Titan, we think it has one of the most impressive exterior looks in the business with just the right amount of aggressiveness combined with a dose of luxury to give it the sense of a commanding presence on the road.

Buying a truck nowadays can be a very time-consuming adventure and will come down to personal preference and desire for different options and creature comforts in what are now very luxurious cabins.

Nissan has made giant strides over the past few years in the pickup world and we would recommend checking out the new Titan. You might just be surprised at how far it has come and what it now has to offer.

How Medium and Heavy-duty Truck Steering System Market Will Dominate In...