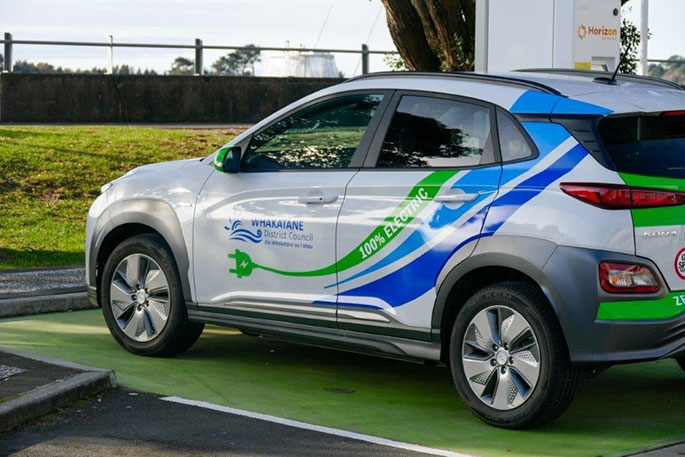 Whakatāne District Council has successfully secured funding to the tune of $63,000 from the Low Emission Vehicles Contestable Fund.

Designed to enable projects that encourage the uptake of electric vehicles and build confidence in the purchase of e-bikes, the Central Government fund is administered by the Energy Efficiency and Conservation Authority.

Whakatāne District Council will use the fund toward the purchase of further electric vehicles, the installation of five on-site double charge stations to support an electric pool fleet, visitors and the public, and also a secure lockup and charging site for ten staff e-bikes.

“An energy audit identified that Council’s petrol and diesel consumption was contributing to more than 12 per cent of our carbon footprint, so the decision was made to begin replacing the Council fleet with electric vehicles.

“As with most pioneering technology, the cost of energy-efficient infrastructure is higher so attaining this funding is hugely valuable.”

Sixty-seven applications to the fund were received, and Whakatāne District Council’s project was one of 24 that were approved.

Minister of Energy and Resources, Dr Megan Woods says it was the first time organisations could apply for co-funding to install secure e-bike storage facilities to encourage their uptake.

“Demand for e-bikes is high, but we know one barrier to regular e-bike commuting is having somewhere safe to store the bike.

“Decarbonising the transport sector represents a huge opportunity to reduce the country’s emissions, and enabling people to shift to a different transport mode plays a part in that.”

While announcing the successful projects, Dr Woods noted that a number of previously-funded ventures and spin-offs have hit the road in the last few months, including Foodstuffs launching the first fully electric refrigerated truck in the country, a NZ Post scheme to assist its contract drivers to buy electric delivery vans, and Asthma New Zealand buying EVs for its mobile nurses in order to reduce air pollution.

“The Contestable Fund encourages innovation and investment to accelerate the uptake of low emission vehicles in New Zealand. The success of previously-funded projects shows that we can meet New Zealand’s transport needs across a variety of sectors, giving other organisations the confidence to make their own investments.”

Barnes says installation of the charging stations and the e-bike facility will begin next month.

“Now we’ve received the funding, we’re eager to progress this project quickly as possible,” she says.

“We’ll certainly advise our stakeholders when the charging stations are operational, so everyone can benefit from the new technology.”