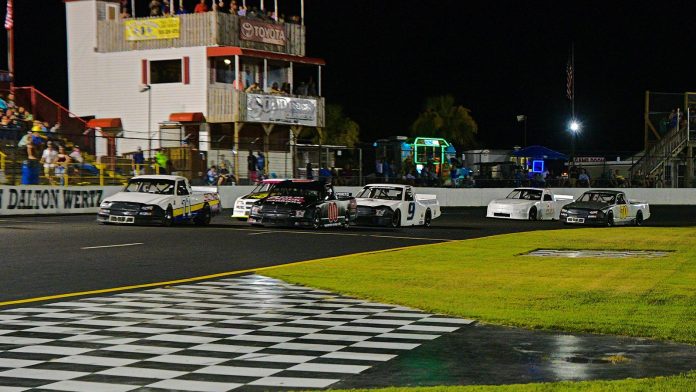 Tickets, which are available at the gate on race day, are $15 for adults while kids 10 and under get in free

Bobby Watson’s Carteret County Speedway roars back in action Saturday night with the Moore’s Old-Tyme Barbeque Chicken & Seafood Summer Jam, which will be headlined by Super Trucks and Mini-Stocks.

The Team Chevrolet of Swansboro Super Truck Series will again pay $1,500 to win in its second race of the season. The trucks raced on July 25th with Jody Measamer scoring the victory over Willie Grainer and remaining undefeated at Carteret County Speedway.

The green flag for Saturday’s race will drop at 7 p.m.

This week, he will look for his fourth Super Truck win and fifth overall win at Carteret, but will again be chased by drivers like Grainger, Chris Burns and others.

Along with the $1,500 to win, $300 to start purse, Super Trucks who compete in the race will also get five free gallons of fuel.

The Battlefield Tire Pros Mini-Stock Showdown will pay $800 to win, a substantial increase from the regular purse for the division. The Mini-Stocks have been in action once in 2020 with Travis Miller scoring the win over James Horner.

The Mini-Stocks are one of two four-cylinder classes that will be in action on Saturday night.

The U-CAR division, which has been dominated recently by Andrew Jackson, but as he moves to Mini-Stocks, Steve Sullivan is looking to dominate. Meanwhile, Abby Jolly, Curtis Lanier and Joe Lanier are all chasing their first Carteret County Speedway wins and have been strong in recent weeks.

The Bombers division, a new, startup class at Carteret County Speedway, will also be in action. The division is designed to be an affordable class with strictly stock rules in place – much like the rules that would exist for cars competing in demolition derby races.

Any car, minus convertibles, can compete in the Bomber division. The rules are available on the speedway website.

The Champ Karts, Mini Cups and Jr. Mini Cups will also be in action. Sean Wales was the most recent winner in the Champ Kart class. Aiden Hetu has won both Mini Cup races this season and is looking for a three-peat. The Jr. Mini Cup division has seen two different winners, rookie Carsyn Gillikin and Scotty Benford. Benford has since moved up to Legends competition and Gillikin will have to fend off 2019 division champion Caleb Braswell, among others.

Tickets, which are available at the gate on race day, are $15 for adults while kids 10 and under get in free.

Impaired woman applying for job arrested after leaving with child in...

Motorcyclist killed in collision with dump truck in Freeport