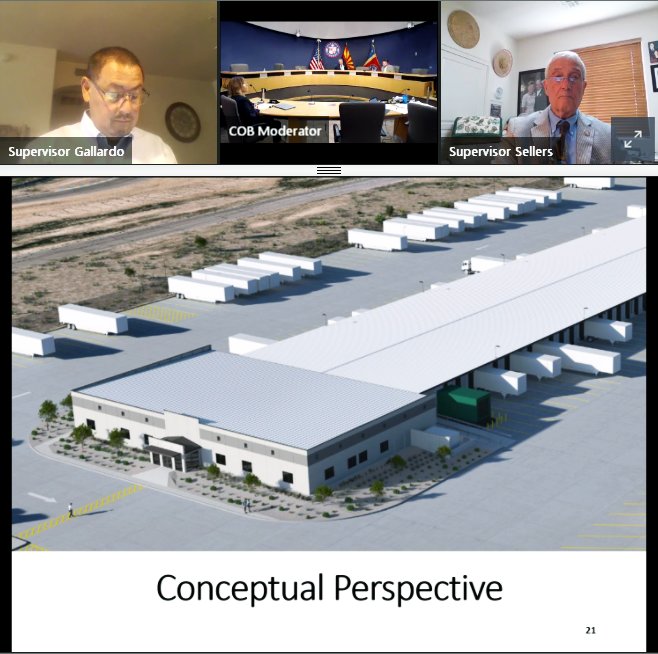 The Maricopa County Board of Supervisors voted unanimously Wednesday, July 21 to approve KW Projects’ request for a Military Compatibility Permit for 157 acres at 152nd Avenue and Camelback Road in unincorporated Litchfield Park, paving the way for construction of a FedEx cross-dock truck terminal that could add 1,100 truck trips daily between the site and the Loop 303.

The site of the former Falcon Golf Club, which closed May 31, is adjacent to Luke Air Force Base’s flight line and is bordered by the cities of Litchfield Park, Glendale and Goodyear.

Activities on the site will include shipment transfers between semitrailers, as well as local pickup and delivery operations.

“I’m delighted that the Board of Supervisors unanimously approved the project,” Jason Morris of the Withey Morris law firm, who represents KW Projects, said after the meeting. “It’s a testament to all of the years of planning on the site.”

The soonest construction could begin is next year, Mr. Morris said via telephone. The developer will spend the next six months preparing engineering and design documents for the facility, and working on Camelback Road improvements required by the county as part of 16 project stipulations, he said.

KW Developments agreed to pay for roadway improvements that include widening Camelback Road to mitigate traffic impacts in the area and moving a drainage ditch next to the north side of the road onto the property. The developer also will pay $300,000 to help the city of Goodyear install a traffic signal at the intersection of Camelback Road and Sarival Avenue.

During the meeting, Mr. Morris said while KW Projects agreed to help pay for the traffic signal, it’s unusual for a developer to cover costs for a signal so far from a project site.

Supervisors Chairman Clint Hickman, who lives in Litchfield Park and said he drives the roadway daily to and from his family’s farm in Buckeye, agreed it was an usual request, but it was made because traffic on Camelback already backs up nearly a mile from the intersection during peak hours.

Other project stipulations include maximum building height of 60 feet, maximum light pole height of 45 feet, diverting truck traffic to the west, and informing any new tenants of the requirement to comply with a city of Litchfield Park ordinance prohibiting commercial through-truck traffic within city limits.

The cross-dock proposal raised the ire of Litchfield Park and Goodyear residents living in the area, with the county receiving 438 emails in opposition prior to Wednesday’s meeting, and 22,429 people signing on an online petition against it, Planning and Development Director Jennifer Pokorski told supervisors at the start of the meeting. Eight letters of support were received from entities like the Glendale, Greater Phoenix and Arizona chamber of commerce, she said.

Luke Air Force Base and the cities of Goodyear and Litchfield Park wrote letters opposing the project. After meeting with the developer, Luke and Goodyear officials wrote that their concerns were mitigated.

“Now today, it appears that only three of the four stipulations have been included,” he said.

County staff removed the fourth stipulation, which requires the property owner to provide new tenants with an accurate and current copy of Litchfield Park’s commercial truck ordinance, because it was included elsewhere, Ms. Pokorski said, noting it could be added back.

“If it’s added, the city will drop its opposition, Mr. Schoaf said.

Mr. Morris said the developer agreed to its addition.

Residents speaking out included Palm Valley V HOA President Domenick Passio, Litchfield Greens HOA President John Connolly and four others, all of whom said the area will be negatively impacted by the increased traffic and noise.

Mr. Passio said one of his community’s concerns is that trucks will use 152nd Avenue to travel from Camelback to Indian School Road.

“A lot of our children walk through 152nd (and Camelback) to get to their schools,” Mr. Passio said, noting that three schools on either side of 152nd Avenue serve the 1,463-home community. “We don’t want to stop growth. We want smart growth.”

Mr. Connolly asked supervisors to send the request back to the Planning and Zoning Commission or continue it to allow residents to work with the developer to ensure a more compatible use, like light industrial.

The 73-acre Alsup 303 Industrial Park planned at Camelback Road between Alsup and Reems roads, also has a cross-dock facility, he said.

“If this was in that location, you would not be having this push back,” Mr. Connolly said, suggesting that the property owner, Cowley Industries, could build the truck terminal on property it owns on Buckeye Road “in the middle of nowhere.”

Mr. Connolly invited the other four supervisors to drive east on Camelback from the 303 before making a decision.

“Please do not ignore us,” he said.

“I don’t feel like I’ve ignored anyone,” Mr. Hickman said.

Mr. Lazarus asked supervisors to hold off on a decision until the county’s Board of Adjustment meets at 10 a.m. Thursday, Aug. 13 to hear the HOA’s request to review county staff’s interpretation of its zoning ordinance.

Considering just the military overlay, while important, “is not the only decision you need to make,” he said.

Not considering the zoning aspect of the project would set “a horrible precendent,” Mr. Lazarus said. “In the future, if a member of the community lives near a property that is to be zoned within the military overlay, their issues don’t matter. They’re disinfranchised. That’s why we believe this case should be sent back to the planning commission for consideration as a zoning case along with a compatibility permit.”

Responding to a question by Supervisor Bill Gates, Ms. Pokorski said the county has used the MCP process for 10 years.

Before calling for a motion, Mr. Hickman called the former golf course site “an awfully tricky piece of land, especially when it comes to protection of Luke Air Force Base and private property rights.”

While the outcome was not unexpected, opponents were disappointed the MCP was approved and said they planned to email FedEx, the city of Goodyear and others to let them know their displeasure at having the facility so close to their neighborhoods while they await the Board of Adjustment’s decision.

The Daily Dash: Questions on why a driver with drug convictions...