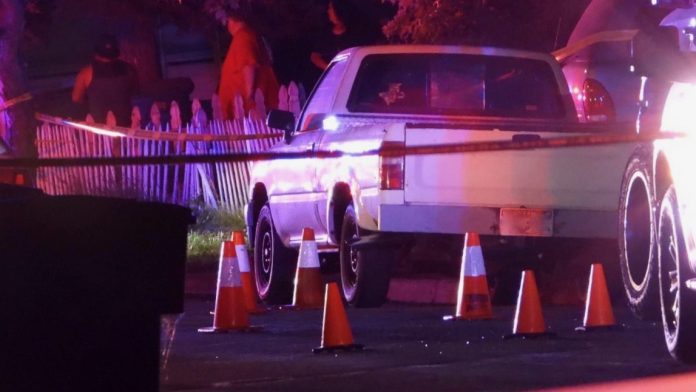 WEST JORDAN, Utah, Aug. 2, 2020 (Gephardt Daily) — Police from multiple agencies are on the scene of a fatal officer-involved shooting in the vicinity of 2360 West 7680 South in West Jordan Sunday night.

According to West Jordan Police Sgt. J.C. Holt, West Jordan police received a call about 8 p.m. from a man who said he was following a pickup truck that had recently been stolen from a relative.

Officers searched a nearby neighborhood and found the pickup parked at the side of the road with multiple people inside.

Holt said the group initially refused to exit the truck until “at least one occupant of the suspect truck got out, and there were rounds exchanged between the officers and somebody in that truck.

“We know right now that we have one deceased suspect, I don’t have much information on who that person is right now and unfortunately one of our officers was also struck by gunfire. He took the round in his upper shoulder area just above where our ballistic vests go and it went through and lodged back in his shoulder. Fortunately, he’s OK. We do expect him to make a recovery. It’s a non-life-threatening injury at this point.”

Holt said investigators were combing the neighborhood for clues, and multiple people had come forward to say they had seen the shooting play out.

Because the incident was an officer-involved shooting, the investigation will be handled by an outside agency, Holt said.

Other people who were inside the pickup at the time of the shooting are being questioned by police.