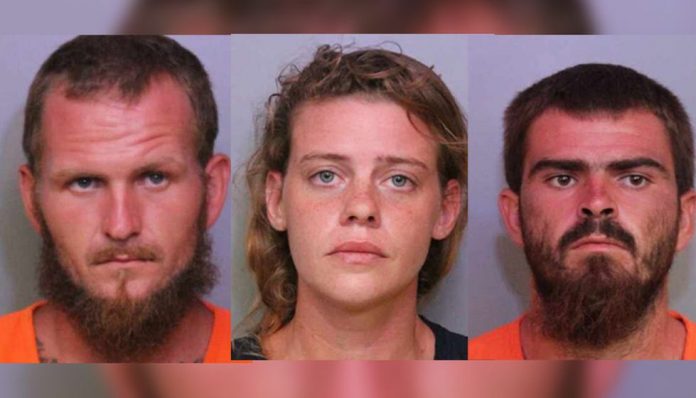 POLK CO., Fla. (Gray News) – The sheriff’s office announced Wednesday they made arrests in connection to three people who were killed on their way to fish at a central Florida lake.

The Polk County sheriff said via news release that Tony “TJ” Wiggins, 26, had been charged with multiple crimes, including felony murder and possession of a firearm by a convicted felon.

His girlfriend, 27-year-old Mary Whittemore, and his brother, 21-year-old William “Robert” Wiggins were charged with accessory after the fact of capital felony. Whittemore also was charged with tampering with evidence.

Detectives said a Dollar General bag at the crime scene led them back to the store, where they obtained surveillance footage and identified TJ Wiggins.

Investigators said Robert Wiggins told them in an interview that and his brother had been at the store and followed Tillman after he finished shopping.

He said his brother directed him to follow the victims’ trucks. TJ Wiggins got out of the truck and attacked Springfield, accusing him of stealing his truck.

Rollins and Tillman got out of their truck, and TJ Wiggins shot all three of them, Robert Wiggins told detectives.

The sheriff’s office said neither TJ Wiggins nor Whittemore are cooperating with detectives. TJ Wiggins is a convicted felon who has served two stints in state prison.

On Saturday, Polk County Sheriff Grady Judd described the killings as a “massacre.” He said the men were beaten and shot.

“This is a horrific scene,” Judd said at a news conference that day. “I’ve been to a lot of murder scenes in my life, and this ranks among the worst.”

Rollins was still alive when the attackers left and called his father for help. His father rushed to the fishing spot about 10 minutes away but forgot his cellphone in the hurry to help his son. He drove to a nearby convenience store, and the clerk helped him reach authorities, but by the time they arrived, Rollins had died.