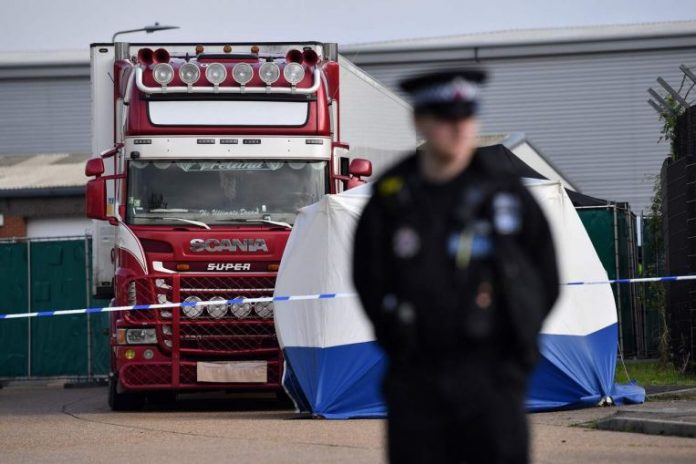 PARIS (AFP) – Thirteen suspects arrested by French police over the deaths of 39 Vietnamese migrants in a refrigerated lorry in Britain have been charged with people trafficking, a judicial source said on Saturday (May 30).

Six of the group – mainly Vietnamese and French nationals – were held on Tuesday in the Paris region and have also been charged with manslaughter after the alleged key figure in a ring of smugglers was caught in Germany.

Thirteen people were also arrested in Belgium the same day in an international police operation.

The migrants – 31 men and eight women – were found dead in the truck in an industrial zone east of London in October 2019.

The driver of the lorry has already admitted manslaughter but Tuesday’s swoop targeted the smugglers suspected of organising the migrants’ journey from Asia.

“He could be the head of the network on the French side,” a source close to the investigation said.

But the man’s nationality was not revealed.

The 13 indicted in France also face charges of membership of a criminal organisation and all but one was put in custody.

Eleven of the 13 suspects in Belgium have already been charged by a judge in Bruges with people trafficking, membership of a criminal organisation and fraud, according to Belgian prosecutors.

The investigation found that the migrants who died were loaded into the truck in northern France, and that the network continued to operate even after the tragedy, charging up to 20,000 euros (S$31,000) to cross from France to Britain.

Investigation sources told AFP the group caught in France was believed to have housed the migrants and then sent them from Paris to the north by taxi.

The driver of the lorry, Maurice Robinson from Northern Ireland, last month pleaded guilty to manslaughter over the 39 deaths.

Four other men are on trial in London over the tragedy, while another man, Ronan Hughes, is facing extradition from Ireland to Britain on 39 counts of manslaughter and one of conspiracy to commit unlawful immigration.

Changes in Consumer Behavior During Coronavirus Outbreak May Affect Automated Side...