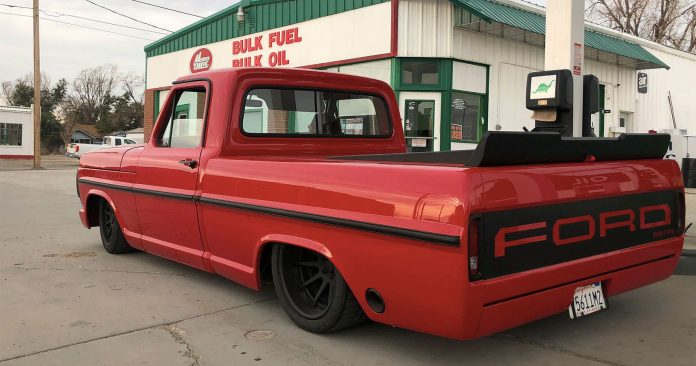 The modern muscle car wars in Detroit might have been put on hold, as the C8 Corvette dominates headlines and the coronavirus pandemic pretty much shuts down the chances of any new Dodge Challengers or Ford’s Shelby Mustangs special editions making headlines. But as awesome as the new crop of massively powerful cars might seem, there’s still something amazing about classic cars that just can’t be beaten. Even vintage trucks look so much better than today’s enormous pickups—and when they’ve received a massive Roush V8 engine swap like this 1969 Ford F-100 built by Lucky 7 Speed Shop, all the better.

The truck has been dubbed the “GRT-100″ and was built for the Good Guys Grand Prize at the 2019 PPG Nationals in Columbus, Ohio. The whole build spared absolutely no expense and looks the part, as well. At the heart and soul is a Coyote V8 crate engine a la Roush producing 425 horsepower and 475  lb-ft of torque. That grunt is routed to the rear wheels through a Tremec six-speed manual gearbox, a custom aluminum driveshaft, and a Moser nine-inch rear end. Those wheels are courtesy of US Mags and measure 18″ x 10″ up front and 18″ x 12” at the tail.

The truck has received a custom chassis to handle the performance-oriented modifications that was built by Scott’s Hotrods ‘n Customs. Suspension comes in the form of JRI hydraulic coilovers, while braking is handled by Wilwood four-piston calipers clamping down on 14-inch rotors. With a stance that would make a JDM tuner proud, the truck nonetheless looks perfectly mean and probably sounds the business, too, thanks to the powerplant under its bright red hood. Looking good, GRT-100!

Torstein Salvesen grew up surrounded by Los Angeles car culture, going to small enthusiast meets and enormous industry shows. He learned to drive stick shift in a 1948 Chevy pickup with no first gear and currently struggles through LA traffic in a 2001 Audi TT 6-speed. These days he mostly rides his bicycle in town and heads out to Malibu or the Angeles Crest Highway for fun mornings in the canyons. He’s written in various media since graduating from UC Berkeley in 2010.

Mozambique: Torture by security forces in gruesome videos must be investigated

Road trip! This camper is like a backpack for your pickup...