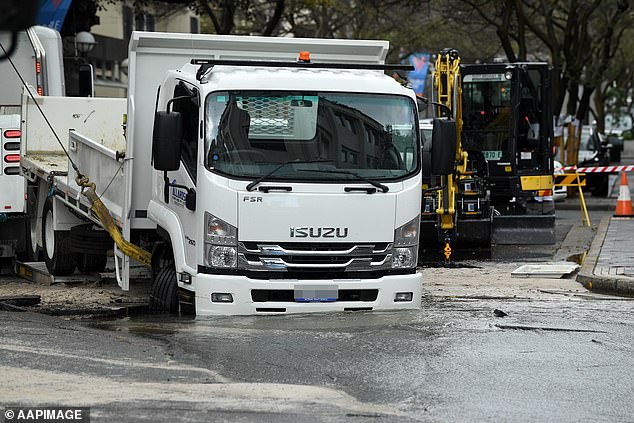 By Claudia Poposki and Brittany Chain For Daily Mail Australia

A truck was nearly swallowed by a sinkhole which opened up when a water main burst in one of Sydney’s most exclusive suburbs.

The truck fell through the road after a pipe collapsed on Bay Street in Double Bay on Tuesday morning, following days of unrelenting rain.

Images showed the front two tyres of the truck submerged in water as workers attempted to remove the vehicle.

The puddle covered the entire intersection. 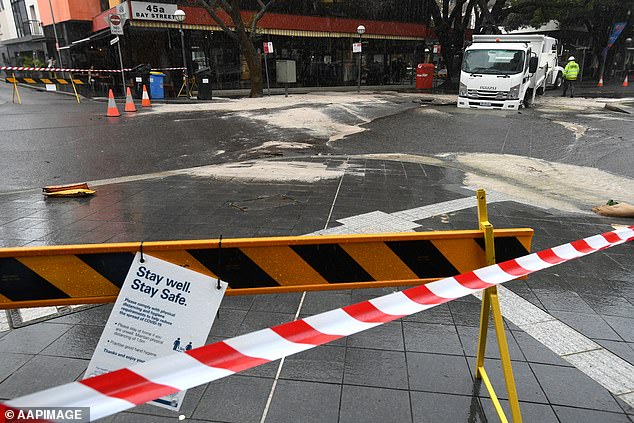 No one was harmed when the main burst and the road collapsed, swallowing the truck.

Woollahra Council have organised a diversion and no major roads have been blocked.

The truck was removed before 10.30am.

Residents told the Sydney Morning Herald they were without water – and were told it could be up to two days before it returned.

‘As part of the repairs, around 6am the truck of a Sydney Water contractor was delivering an excavator and its front wheels fell into the roadway, which appears to have been undermined by the burst main. Tow trucks have safely removed the vehicle. Nobody was injured during the incident.

‘It’s too early to determine the cause of the water main break.’ 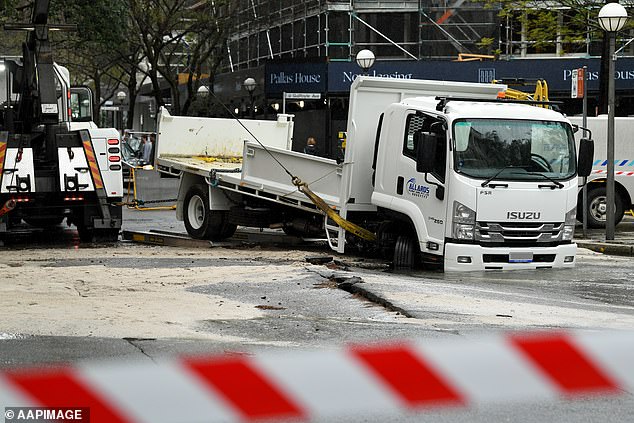 No one was harmed when the main burst and the road collapsed, swallowing the truck (pictured)

Sydney Water will collaborate with Woollahra Council to repair the road once the main has been fixed.

‘Sydney Water’s emergency response crews work quickly, safely and efficiently to maintain services to customers. The teams include both technical and customer service experts, all focussed on minimising the impacts of emergency response.’

Towns in New South Wales have been battered by another night of wild weather, with up to 180mm of rain dumped in some areas overnight as winds reached 120km/h. 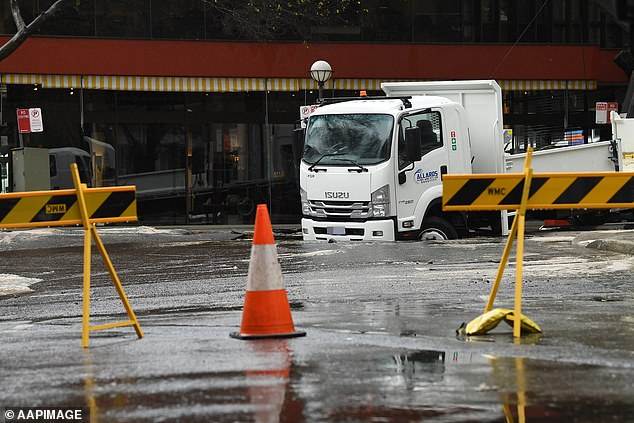 Residents told the Sydney Morning Herald they were without water – and were told it could be up to two days before it returned (pictured, the truck on Tuesday morning)

More than 14,000 homes and businesses were plunged into darkness as power lines went down, with some residents told to flee their homes on the south coast.

Three motorists and six cows had to be rescued overnight as damaging winds and flash flooding wreak havoc on the coastal communities.

Residents of Sussex Inlet, 155km south of Sydney, were urged to leave their homes immediately late on Monday evening as torrential rain paved the way for flooding.

Emergency crews have also been working around the clock to restore power to 14,500 Shoalhaven homes and businesses which were affected by the storm.

Endeavour Energy said more than 200 electrical hazards were reported on its network in the region on Monday.

The aggressive low pressure system will ease by Tuesday afternoon as it slowly makes its way off shore, but not before wind gusts reach upwards of 120km/h.