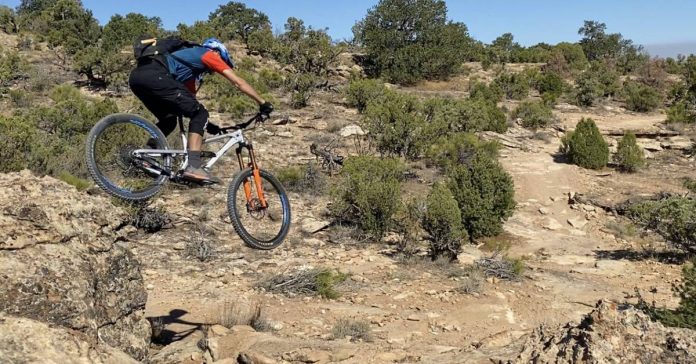 Watch Canfield Bikes’ debut video of its new downhill bike, the ONE.2, featuring the bike designer himself.

It’s not often that the founder of a bike brand puts new bikes to the test. At least, not on film. But Canfield Bikes just created its first downhill bike with the CBF (Canfield Balance Formula) parallel link suspension system.

The full-suspension Canfield ONE.2 has 29-inch wheels, 203 mm of travel, and a 63-degree head angle. It can also be run with 27-inch wheels, comes with a custom saddle, and comes in full build packages.

But enough talk about the bike — let’s see it in action. Follow along with Canfield Bikes owner himself, Lance Canfield, as he takes the first CBF downhill bike for a casual pedal down some iconic Colorado terrain.

“Thanks to the ultra-efficient patented CBF suspension and upright riding position, it can be set up to earn its turns. Rear travel can be reduced to 190 millimeters by short-stroking the shock. Pair it with a single-crown fork, dropper post and wide-range cassette, and you’ve got a pedal-able ‘super enduro’ machine that’s part monster truck, part billy goat,” teased Canfield in its release.

This bike crushes on the climbs and flies through the technical downhills. It looks like it could tackle anything — at least when Canfield is riding.

Will He Fall? Mountain Biker Tests Balance on ‘Skinnies’

Geoff Gulevich is a professional freeride mountain biker. Still, some of these “skinnies” stunts are wicked impressive. Read more…

Nikola’s Response Is A Tacit Admission of Securities Fraud