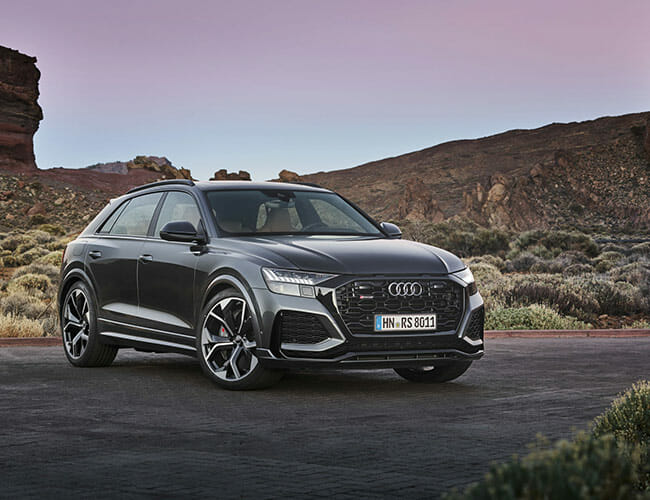 Before 1991, there was no such thing as a high-performance sport-utility vehicle. The GMC Typhoon was the Bush I-era proto-performance SUV that paved the way for today’s monsters. It was a clunky concoction of a thing, one just fast enough to be mentioned, sensationally, in the same breath as Corvettes and Ferraris of its day.

An honorable feat for a repurposed truck, sure. But the idea of a performance SUV seemed more like a tween wearing jet-powered rollerblades: fast, hilarious, but never anything to take seriously.

Nearly 30 years later, however, we find ourselves behind the wheel of a sport-ute that’s capable of overtaking sports cars with gusto, even on twisty mountain roads. Audi’s über-advanced version of their sloped-roof flagship Q8, the RS Q8, is wider and meaner — and blurs the dotted yellow line between sports car and SUV as well as any vehicle could.

And maybe as well as any vehicle should.

The 592-hp RS Q8 weighs in at more than 5,000 pounds, has upwards of 60 cubic feet of cargo space, and — when prompted — can ascend to nearly eight inches of ground clearance. On paper, you’d say it has no business playing among sports cars. But somehow, it’s fast and nimble as one.

That concept, put on pavement, is giggle-worthy. Once you meet it, you begin to appreciate how much work went into producing such a physics-defying vehicle. Audi says the RS Q8 was put through a staggering 745,645 miles of worldwide development testing — which may or may not include its record-setting time of seven minutes and 42 seconds over the 12.9 miles of the Nurburgring Nordschleife.

We had about 200 miles of seat time in the RS Q8 on the volcanic isle of Tenerife in the Canary Islands, a Spanish archipelago off the coast of northwest Africa. Here, all roads lead to Mount Teide, the Earth’s third-highest volcanic structure, where the aftermath of its last eruption in 1909 is eerily visible among the otherworldly terrain.  We drove through cramped roads and roundabouts at sea level, then up tight, twisty small town roads all the way to 8,000 feet before stopping at Teide National Park to do it all again — but downhill. Guardrails are mostly present and well-maintained…but they’re made of wood.

At 17 inches across, the optional 10-piston carbon-ceramic brakes are larger than the wheels and tires of some economy cars. On top of their fade-free prowess, Audi says they save 75 pounds per corner, but when you have an optional Bang & Olufsen 23-speaker system in the cabin, who’s really counting calories?

Inside, in fact, RS Q8 passengers have the luxury of cooled, heated and massage seats and access to Audi’s incredible Virtual Cockpit — a seamless array of screens bisecting the driver and passenger, which looks fluid and organic. Drivers are able to swap their instrument cluster with a full-screen map display. Indeed, the RS Q8’s performance acumen could take a comfortable back seat to its luxurious fit and finish inside and out, if you never bothered to approach the limits of mechanical grip.

But doing that would mean missing the fun. These quaint roads are sought by both gearheads and cyclists with calves like jamón serrano for their smooth, sinuous turns, so dramatic and frequent that they practically form knots. For maximum flavor, select Dynamic mode, one of two RS modes activated by its very own RS MODE button inches from your right thumb. The chunky flat-bottomed steering wheel wrapped in Alcantara feels quick and connected to the adjustable air suspension, which in turn feels utterly planted to the road. Our tester had electromechanical active roll stabilization, which did a Hogwarts-worthy job of mitigating body roll through turns.

The most aggressive and visceral setting is RS 2. It’s here the V8 delivers a full-chested, low-frequency howl all the way up to 7,000 rpm; traction and stability control say peace out; and all four corners of the suspension are tightened up to just shy of jarring firmness. Combine all this with the ultra quick-ratio steering rack and you almost think you’re in a vehicle with a lower center of gravity. Almost. Enter the cognitive dissonance: I shouldn’t be able to do this in an SUV, but here I am.

Momentum. The rapid acceleration mercilessly pins you to the seatback, and you can feel the deceleration detaching the retinas in your eyeballs. What’s more difficult to get a sense of: the speed at which you are traveling, due to the size, height and solitude of the Q8 platform. Pay close mind to the head-up display’s speedo.

One beef with special performance editions like this is that there’s always some fine-tuning required. A vehicle of this magnitude should have its balls-to-the-wall setting as the factory default; you should have to finger through menu settings to make it pretend to be the plebeian car from which it came, not the other way around. With screens come submenus, and within those submenus, you’ll find sports car attributes à la carte. Take the time to tick the boxes and create the RS you want it to be.

Also, a minor quibble, but there’s an underwhelming color selection. It largely boils down to a cloudy sky silver, a kind of dark blue, and an over-the-top Kermit-the-Frog green.

If the biggest, fastest thing is well, your thing, there are several options in this parking lot. The Mercedes-AMG GLC63 S Coupe, which is officially the second-fastest SUV around the fabled Nurburgring is one option. Others include the Land Rover Range Rover Sport SVR, Porsche Cayenne Turbo, BMW X6 M and Jaguar F-Pace SVR.

The RS Q8 is a rolling testament to the shockingly-narrow gap between sports car and sports SUV these days. You’ll be doing yourself (and the car) a great disservice if you only drive it well below it under its capabilities, the way most Beverly Hills and Bridgehampton buyers likely will.

Everything the RS truly stands for encourages you to merge onramps at 1.0 g, brake late into turns and accelerate hard out of them. You’ll find the way you want to drive the RS Q8 feels an awful lot like…a sports car. It may not really be one, but the RS Q8 is so close to being a 5,000-pound sports car, it’s scary.

Audi hosted us and provided this product for review.

Blast from the past: Flatwoods service shop has 1950s look