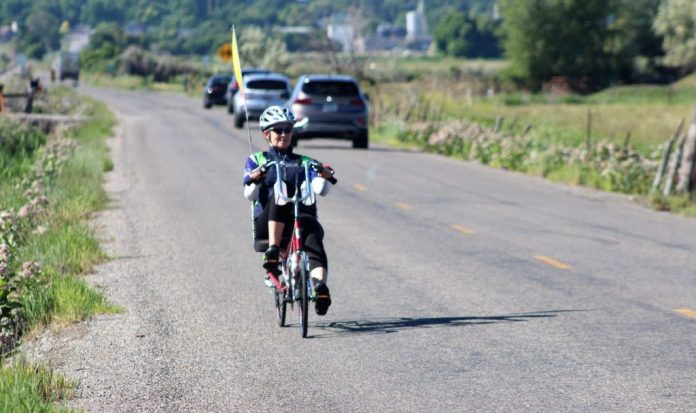 Kathleen Fisher traveled from her Logan home on her way to hyrum. She said her red Tour Easy recumbent bike keeps cycling fun from an retired person’s perspective.

LOGAN – People driving around the south end of Cache Valley may have seen Kathleen Fisher on her red Tour Easy recumbent bike. The bike is longer than a regular bike and has a large rear tire and a small front tire. Her orange bike flag dangles high in the air, waving in the wind as she takes roads less traveled. 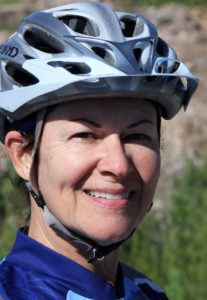 Some refer to her bike as “bent.”

“I rode a traditional touring bike for decades before changing to a recumbent bike,” she said. “I saw more of them in the Pacific Northwest, where I used to live, than I have in Cache Valley.”

Fisher rides from her home in Logan to Hyrum with a few turns. Most of the time she rides 20 to 30 miles depending on the route she takes.

She said people don’t realize how fun and easy it is to ride a recumbent bike, especially from an older person’s perspective.

“The seat is wider and more comfortable, you aren’t bent over the handlebars and there is no pressure on your wrists,” the retired dental hygienist said. “I can go on longer rides and not feel as exhausted at the end of the ride. I think they have even broken some speed records for bicycles.”

Fisher sometimes gets strange looks from other people riding past her on their bikes.

“I think other cyclists should be more open-minded,” she said.

Some people build their own recumbent bikes. Bob Jensen, of Preston, built one with a friend while working as a fireman in Las Vegas.

“We made two recumbents from some older bikes and some metal tubing,“ he said. ”I found my recumbent was easier to ride than my other bike, I wasn’t hunched over the handlebars. I felt like I pushed against the back of the seat, giving me more leg power.”

He said riding his homemade bike was also easier on his wrists.

“They are so nice to ride. They seem to be a little more stable and when you come to a stop at intersections you can put both feet down,” Jensen said. “I rode the wheels off of that bike; it was just a fun bike to ride.”

After his homemade bike failed, he didn’t replace it.

The one disadvantage of the low riding bike is the cyclist can’t stand on the peddles when going uphill, so they may have to take it kind of slow, but they can make up for it on the downhill side.

The earliest-known recumbent bicycle was made in France in the late 1800’s and they became popular in the 1970’s. They have continued to evolve into different shapes and sizes. Some of the odd-looking bikes have large wheels, some have small and some have a combination of both. There is even a three-wheel variation, and a trail version of the bike.

Recumbent bikes have a record of being faster even than the ram-horned racers. They have an aerodynamic advantage because the pilot sits in reclined position and the feet are forward. There is less wind resistance for the machine and its rider.

The bikes have larger seats and full back support, making them ideal for anyone suffering from lower back or sciatica problems who still want to ride.