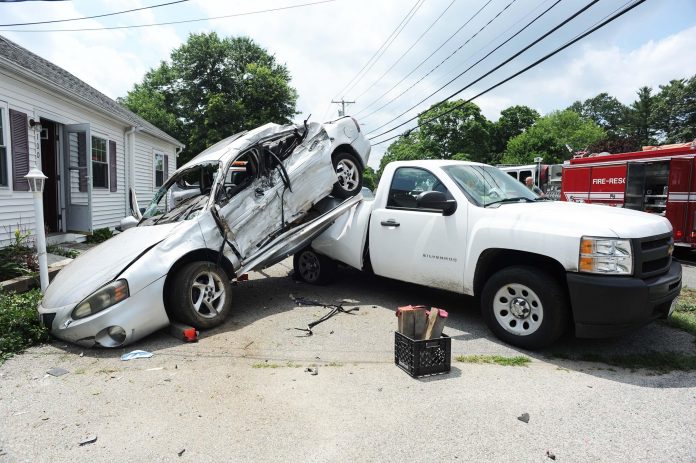 A 38-year-old Taunton man and toddler were transported to Boston Children’s Hospital and South Shore Hospital after a crash in the area of 100 Centre Ave. Thursday afternoon, in which their car ended up on top of the bed of a pickup truck parked in a driveway. The man appeared to be seriously injured, though conscious and alert at the scene, while the toddler was in a child’s seat at the time of the crash and did not appear to have any significant injuries, Rockland police said.

ROCKLAND — A Taunton man and toddler have been transported by ambulance to area hospitals after a single-vehicle crash landed their car on top of a pickup truck Thursday afternoon.

Around 12:30 p.m., Rockland police and fire responded to a motor vehicle crash in the area of 100 Centre Ave.

Upon arrival, first responders found a silver Pontiac Grand Prix involved in the crash, coming to rest with the tail end of the car on top of the bed of a white Chevy Silverado pickup truck in the driveway of a residence.

The truck was unoccupied at the time of the crash, Rockland police Lt. Nicholas Zeoli said. The Pontiac sustained heavy damage to the driver’s and passenger’s sides, with both windshields shattered.

The residence where the pickup truck was parked was also struck in the crash, sustaining damage to the front left corner of the house and the front steps, Zeoli said.

The two occupants of the Pontiac, a 38-year-old Taunton man and a toddler, were extricated from the vehicle by Rockland firefighters, according to a tweet from Rockland Fire Department about the incident. The man appeared to have serious injuries, but was conscious and alert at the scene, Zeoli said, while the toddler, in a child seat at the time of the crash, did not appear to have any significant injuries.

Their status is unknown at this time, Zeoli said.

The cause of the crash remains unknown at this time, Zeoli said, and the incident is under investigation by Rockland police.

Staff writer Corlyn Voorhees can be reached at cvoorhees@enterprisenews.com. You can follow her on Twitter at @corlyn_ENT.