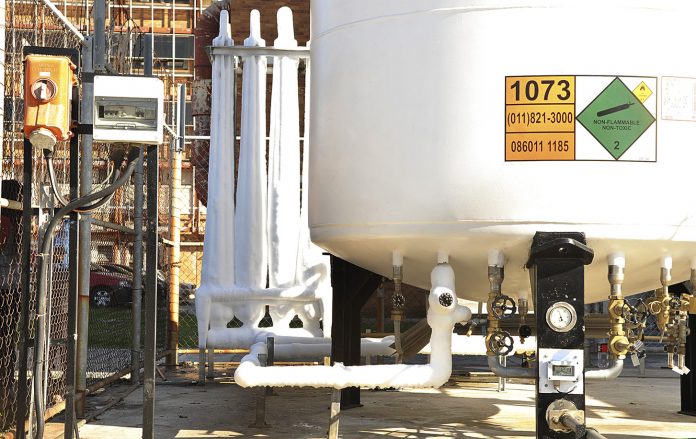 An iced-up bulk oxygen storage tank at Livingstone Hospital in Nelson Mandela Bay. Teams are assisting around the province to renovate and fix bulk storage facilities and infrastructure to make sure that hospitals will have enough oxygen when the province hits a peak of coronavirus infections.( Photo: Mike Holmes)

Planners, auditors, engineers, technicians and truck drivers are in a race against time to get enough oxygen to Eastern Cape’s hospitals to provide for Covid-19 patients as the province braces for a surge of infections predicted for August and September.

Demand for oxygen in Eastern Cape hospitals was expected to soar to eight times the normal levels, but with the main supplier of oxygen, Afrox, based in Port Elizabeth, teams are working around the clock to get bulk supply or cylinders to strategic points to other areas of the province.

Eastern Cape has 67,818 positive cases of coronavirus infections, 49,938 recoveries and 1,345 deaths caused by Covid-19, according to statistics released by the Eastern Cape Department of Health.

“We believe that the oxygen demand will be as high as eight times the basic demand,” Professor Ian Sanne from the organisation Right to Care. With donations from USAID, Right to Care is working with teams from Wits Health and Deloitte to find solutions for Eastern Cape’s oxygen problem. Sanne was part of the team of experts sent to the province by Minister of Health Zweli Mkhize to assess and strengthen the province’s Covid-19 response.

Sanne explained that they were looking at three formats of medical oxygen: liquid oxygen in bulk storage facilities, oxygen cylinders and oxygen concentrators.

“Bulk storage needs to be expanded. Six hospitals in the province… will have bulk storage facilities,” he said. Large tertiary hospitals such as Livingstone Hospital in Port Elizabeth already have these.

“You need a base for the oxygen tanks,” he added. “Afrox has agreed to put in the bulk storage tanks for us.”

“We will know daily and can send the trucks to resupply when needed,” he said. “Our projection is that at the peak of the pandemic we will have to refill these bulk tanks every day.”

He said there are a limited number of oxygen cylinders available and that this shortage was occurring worldwide.

“Hospitals that are dependent on cylinders are struggling at this time to get a fast enough turnaround in the cylinders. Afrox has indicated that they are shifting an additional 1,000 cylinders into the Eastern Cape. There are hospitals that are under pressure today. They have to borrow from each other to meet the urgent demand. We also need to enhance the supply route for these cylinders.”

Sanne said a Covid-19 patient who needs a significant amount of oxygen will empty a cylinder in four to six hours: “So you need about three cylinders per patient per day. We need a much enhanced cylinder resupply or convert these hospitals to bulk oxygen or a combination of the two.”

As oxygen points in a hospital are increased, said Sanne, VIE (vacuum insulated evaporator) units used to convert liquid oxygen to gas will freeze up.

“These VIE units must be improved,” he said, adding that auditing firm Deloitte is auditing 100 facilities around the country and working with teams from Wits Health, supported by Right to Care and USAID, to fix these units in a fast turnaround time.

In many hospitals, the pipes that take oxygen to beds need to be replaced. In some hospitals, these pipes are not big enough. Copper pipes or temporary piping must be installed.

He said the Rev Dr Elizabeth Mamisa Chabula-Nxiweni Field Hospital in Port Elizabeth, constructed by Volkswagen in a joint project with the Nelson Mandela Bay Business Chamber and the Nelson Mandela Bay municipality with funding from the German government, has an oxygen installation and reticulation for close to 600 beds. Sanne said that this will be a substantive enhancement of the number of critical care beds needed in the province.

“The flow rate of oxygen that they produce is not enough for [critically ill patients], but patients with moderate illness can use them,” he said. “The problem is that these machines are in short supply all around the world. We have about 100 available in South Africa at this point in time. We will propose to the advisory committee that the Treasury buys all of them (so) that we can use these for the more remote areas,” he said.

He said nationally the investment would be substantial.

“We don’t have the numbers yet, but it will be more than R100-million in oxygen upgrades. Afrox is putting extra funding into this project as well,” he said.

For the Eastern Cape, Sanne said the large regional hospital in Nelson Mandela Bay, Dora Nginza Hospital, was being upgraded with great urgency.

“We have also received word from Cradock Hospital that they were out of oxygen cylinders,” he said. “There is daily work to resupply the hospitals.”

“As a consulting team, we have been working on this question for a couple of months. We were only really able to prove our point [about oxygen needs] after the Western Cape reached a peak number of infections. I am as confident as I can be in the current situation. It is an important problem that must be addressed. We are scrambling to get this right.

He said using last winter’s demand for medical oxygen as a baseline, Afrox’s modelling data shows that it can supply six times the demand.

“They will need the co-operation of the other oxygen suppliers to transfer medical oxygen to the public sector. Everyone has agreed that that co-operation should be undertaken. He said if this was not sufficient, industrial oxygen, a less pure form of oxygen, would be used.

“It is still regulated by the South African Health Product Regulatory Authority,” he said, explaining that hospitals in Mexico and the United Kingdom had to implement similar measures.

“We may need to inform industries that use industrial oxygen that they will have to give it up for a while. The big smelters are huge consumers. If we get into real trouble we will have to ask them to switch off. But there is a lot of oxygen in reserve at the moment before we get there. We have enough data to know well in advance if we are going to run into problems,” he said.

Sanne said the oxygen truck drivers were the unsung heroes of the pandemic.

“Even during the recent trucking strike they were willing to drive. Our oxygen truck drivers must be treated like heroes,” he said.

“We are talking to manufacturers and production… will be shifted from industrial oxygen to medical oxygen. It will be a daily management issue and we will deal with it.”

Mkhize said that in Eastern Cape, where medical oxygen was manufactured in Port Elizabeth, there was “lots of stress” involved in moving it to where it was needed.

Zungu said the oxygen team would revise priority hospitals to consider the plight of four districts in Eastern Cape (Alfred Nzo with its seat in Mount Ayliff, Joe Gqabi with its seat in Aliwal North, Sarah Baartman district surrounding Nelson Mandela Bay and the Chris Hani District with its seat in Komani.) None of these districts had regional hospitals.

Head of the province’s Covid-19 project management unit Dr Sibongile Zungu said a lot of work had been done on supply chain management for oxygen and confirmed that teams from the National Department of Health were working on the issue as well.

“It will create a bit of a challenge in terms of distribution to districts on the periphery that medical oxygen is being manufactured in Port Elizabeth. The installation of [bulk] tanks have started at some hospitals. The work is being fast-tracked,” she said.

She said the approval of Phase 2(a) of the field hospital in Port Elizabeth was also being fast-tracked to make more beds with oxygen available. In her presentation setting out the project management unit’s plans for the province, Zungu said provision of oxygen had been earmarked as high priority and high risk. She said consideration had to be given to sourcing oxygen in neighbouring provinces for districts further from Nelson Mandela Bay.

“For example, Alfred Nzo and OR Tambo districts could source their oxygen from KwaZulu-Natal.”

Zungu said the oxygen team would revise priority hospitals to consider the plight of four districts in Eastern Cape (Alfred Nzo with its seat in Mount Ayliff, Joe Gqabi with its seat in Aliwal North, Sarah Baartman district surrounding Nelson Mandela Bay and the Chris Hani District with its seat in Komani.) None of these districts had regional hospitals.

Eastern Cape MEC for Health Sindiswa Gomba told the joint sitting that bulk oxygen had been installed at the Cecilia Makiwane Hospital in East London, the Butterworth Hospital and the Victoria Hospital in Alice.

“In the unlikely event of shortages, oxygen supply will be prioritised for the healthcare/medical sectors. As we also supply non-medical grade oxygen into industry and various industrial applications, we will be able to divert supply from these sectors and refine some of that product to meet medical oxygen grade and standards,” she said.

“Afrox has undertaken an end-to-end oxygen supply chain risk review and business continuity planning that includes an in-depth review of our oxygen supply chain. We have a range of emergency scenarios in place and are testing and implementing those on an ongoing basis and adjusting where appropriate, Rawana said.” DM/MC

Please note you must be a Maverick Insider to comment. Sign up here or if you are already an Insider.

Person killed after climbing under UPS truck in New Paltz