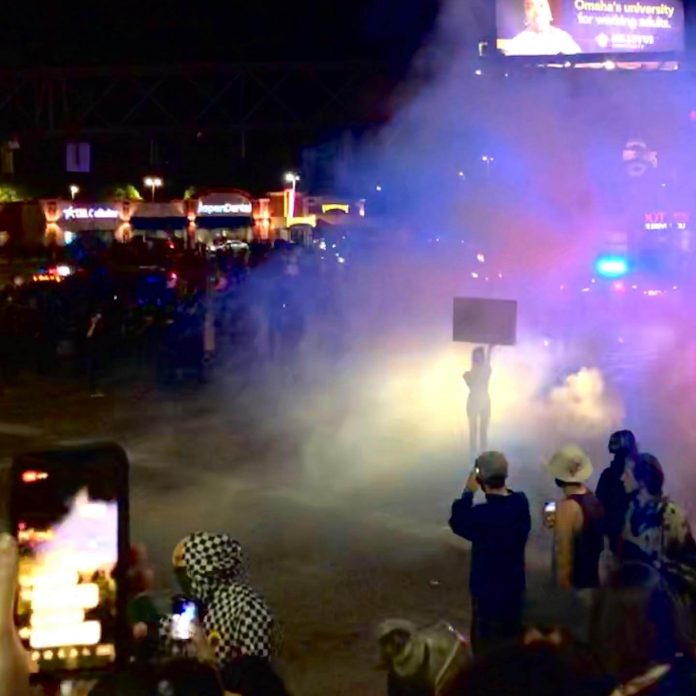 The shockwave cut through the night. A boom that sent the crowd fleeing as tear gas started to fill the air.

As smoke completely enveloped the northwest corner of Dodge and 72nd streets in front of the Crossroads Target, a huddled group of people under the Crossroads Mall sign pointed toward the center of the white cloud flashing red and blue against police sirens.

One girl, barely old enough to be in high school it seemed, held her ground. As the smoke rescinded, the crowd rushed back, dumping water over her eyes and face as she stood motionless, gripping a cardboard sign the size of a car door window that simply said, “George Floyd.”

Police and protesters clashed Friday night across the nation, including Omaha, at demonstrations in response the death of George Floyd, a 47-year-old black man in Minneapolis who died after a white police officer pressed his knee into Floyd’s neck. Protesters began gathering at the intersection of Dodge and 72nd streets in the early evening and disbursed in the early hours of Saturday morning.

I didn’t go to this protest to talk to people, take notes and do many other things I’m accustomed to doing as a reporter. I went to observe, stand with the crowd, listen and experience what felt like a catalytic event in history—a nationwide moment of intensity analogous to few others, able to draw at least 1,000 people, though even city officials were unsure if it could be more, in Omaha out of their homes in the middle of an unprecedented health crisis.

I arrived around 9 p.m. Police had already fired tear gas into the crowd around before the sun had set. By the time I arrived, protesters had left the sidewalks and flooded the intersections. It wasn’t long before police in riot gear started marching eastward across the intersection to back the crowd up. After they’d gone maybe 1,000 feet, the march slowed as protesters held their ground. Eventually the sound of stun grenades and sight of tear gas started to fill the lamplit sidewalks and streets. 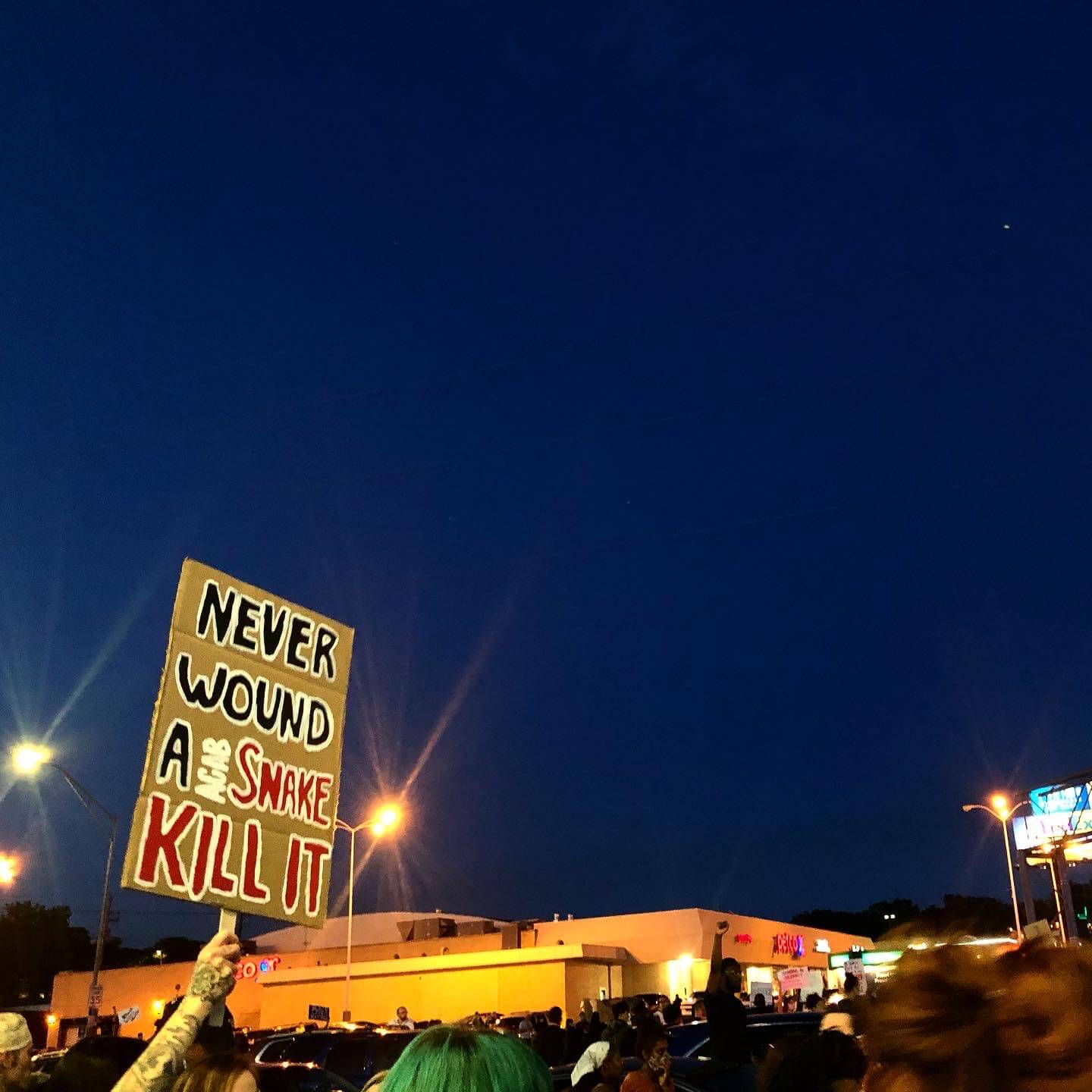 Police used tear gas several times on the crowd near the intersection —the justification being to clear people from the streets onto the sidewalks, although police had blocked off 72nd Street going north and south and had cruisers blocking traffic on Dodge Street probably a mile in either direction.

I don’t know if there was any violence toward police officers. I can only say I didn’t see any firsthand. Protesters yelled and got confrontational. Plastic water bottles sailed from the back of the crowd and sometimes exploded at the boots of officers and  at least a few times glanced off an officers riot helmet. Some people threw rocks. At least once I saw someone throw a glass bottle.

I saw one person on the southeast intersection carried away by police. At a 1 p.m. press conference, Omaha Police Department Chief Todd Schmaderer said officers made 21 arrests. Of those, 16 of the arrested individuals were white, three were black and two were Hispanic. People were arrested on charges varying from disorderly conduct to unlawful possession of a firearm.

Schmaderer also said 12 businesses were damaged, each estimated at thousands of dollars. He said two officers suffered minor injuries and police recorded one minor civilian injury. Twelve police cruisers between several area agencies that responded to the event, were damaged as well. No arrests were due to assaults on an officer, Schmaderer said.

Schmaderer also said he was not disappointed in the community and understood their reaction. 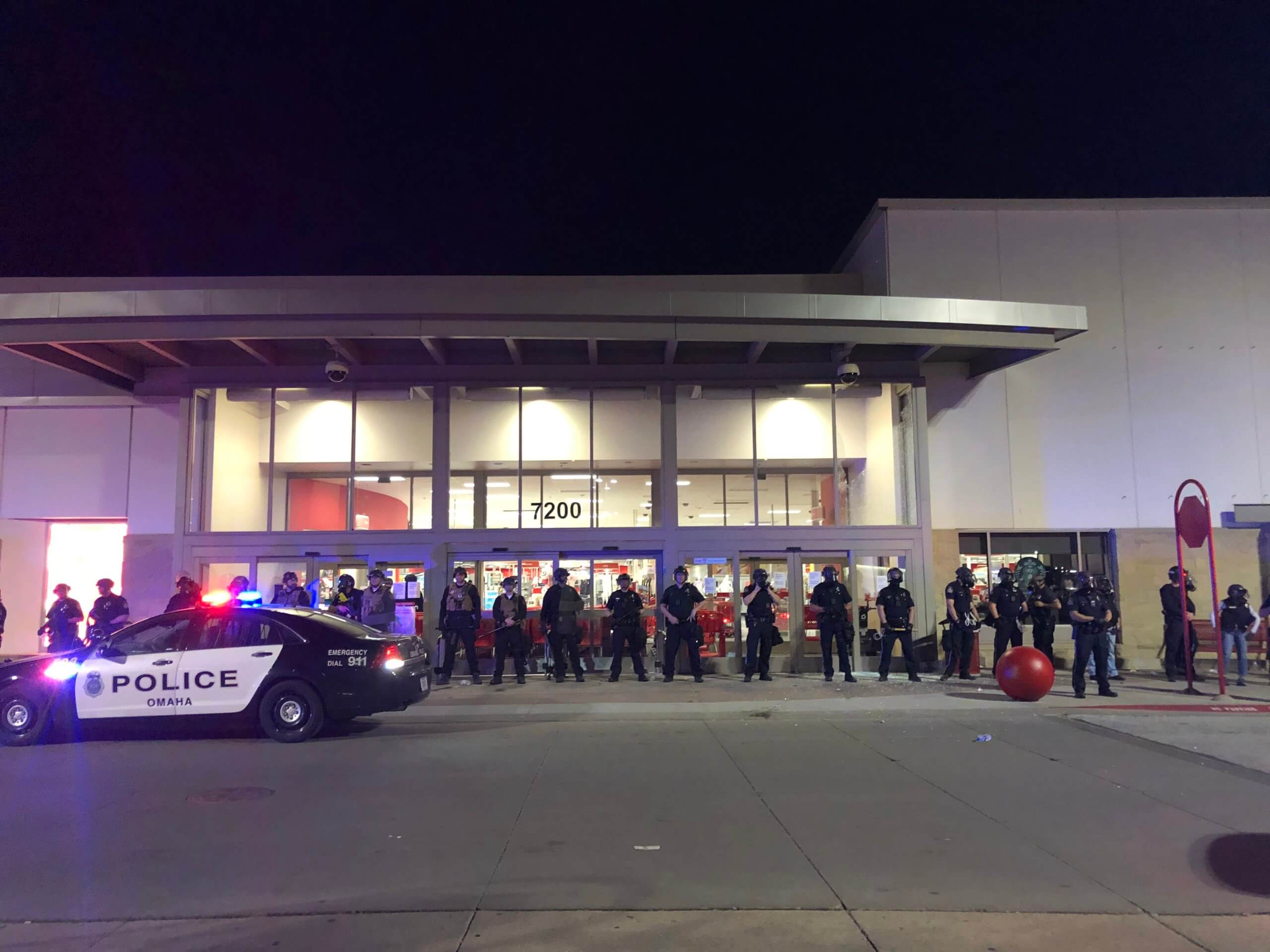 But with more protests on the way tonight, Schmaderer and Mayor Jean Stothert said police will be there and use similar tactics if it turns violent as it did last night, they said.

The most palpable feelings Friday night were grief, frustration and anger. That manifested in people’s protests in a variety of ways. Some begged the bottle and rock throwers to stop. There were plenty of arguments between protesters over the messages on their signs and the reason everyone gathered.

After an ebb and flow of people in the streets as police fired tear gas toward a crowd of mostly young high school and college-aged kids, part of the group ran to Target. The group, which seemed to be led by a young white man, got to the front of the department store where police were already lined up in riot gear. More police came as the two sides stared each other down. Eventually something whipped through a corner window and shattered it.

Police started shooting tear gas and plastic pepper bullets filled with a chalky white powder. The crowd reeled, regrouped and moved west across the parking lots toward Best Buy where, again, they were met by police. Finally they ended the small migration at a Bucky’s gas station where it appeared a few people looted beer and snacks. Along the way the window of a Verizon store was shattered, some damage had been done to a Burger King drive-thru sign and countless graffiti tags were scribbled on walls, the pavement and even a KMTV news van. But in all it was much less than what other cities have experienced. 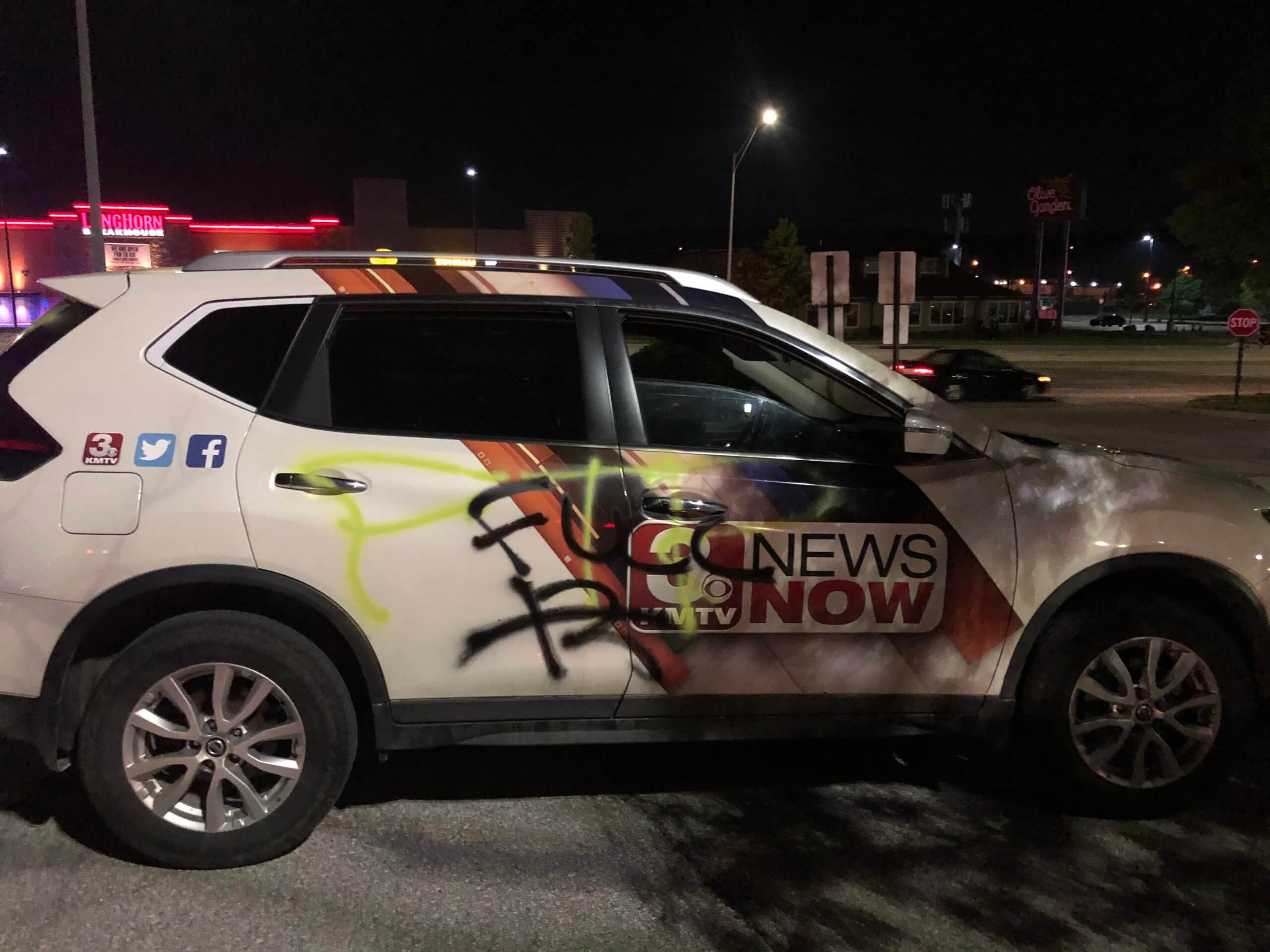 Some of the crowd, now decentralized and lingering across more than a mile of Dodge Street, started to head back toward the center. Police had now backed up most protesters to the southeast corner of Target’s parking lot and the sidewalk down below. At least one person attempted to set a dumpster in the corner of the Target parking lot on fire before another crowd member snuffed it out with a gallon of water he poured over the trash.

Eventually police began marching across the parking lot, firing even more tear gas and forcing many onto the sidewalks along the northwest corner of Dodge and 72nd streets where more police holding batons lined the curb. By midnight, with hardly anywhere left to go, most of the crowd had left.

As I walked back to my car, the surreality and grief of the situation settled. Many of the protestors were kids, angry and upset by a country that seems to continually fail them. From Floyd to the coronavirus pandemic which has killed and infected people of color at rates multitudes higher than their share of the population, it’s difficult to capture the mosaic of emotion that formed into that protest.

At times it felt like I was outside my body, watching a different reality than my own play out. The things that brought me back were the girl standing in tear gas. I only caught a slight downwind spray and I was bleary eyed. It, along with getting shot with plastic pepper bullets, is not fun, glamorous or heroic in the slightest. At one point a semi-truck blocked in traffic by protesters finally inched through the intersection after police gassed and shot protesters back. The white truck paused in the intersection as a fist emerged from the passenger window and the driver laid on the horn. The crowd cheered and clapped. 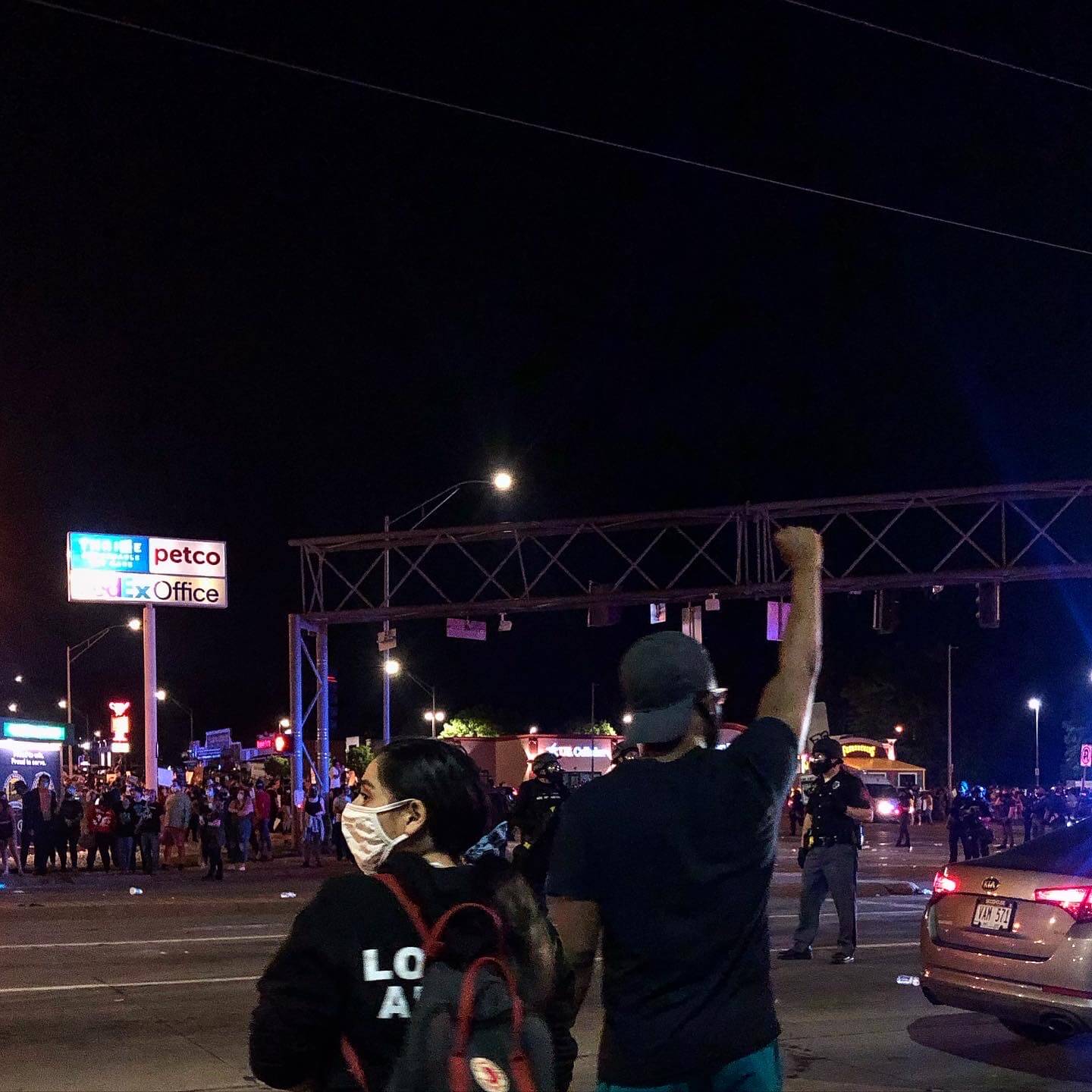 When I got back to my home in South Omaha, my roommates, who had also attended the protest, and I sat in silence. At 1:30 a.m. we turned on the television to watch a press conference from Minnesota.

Gov. Tim Walz said the protests, once a peaceful expression of pain and grief, were now fueled by chaos.

He’s probably right. But these are times without precedent and the language of political expression many used in the past seems out of place now. Walz also said the state is mobilizing a police force larger than any used there during the civil rights era.

I don’t know what that means for the coming days, weeks and months. The country is still in the midst of a global pandemic and locally Douglas County just saw its largest single-day increase in cases on Thursday. Millions are out of work in levels unseen since the Great Depression and many have struggled to get unemployment benefits and stay afloat.

Last night may have been about one man in Minnesota, but it turned up the intensity another couple notches on frustrations over racial and class inequality—feelings that have bubbled for years and seem to have finally exploded across the nation in a way that’s decentralized and hard to imagine.

Car Sales Are Bouncing. Here Are 5 Stocks That Should Benefit.

Five Civilian Armored Vehicles for Your Escape into the Wild