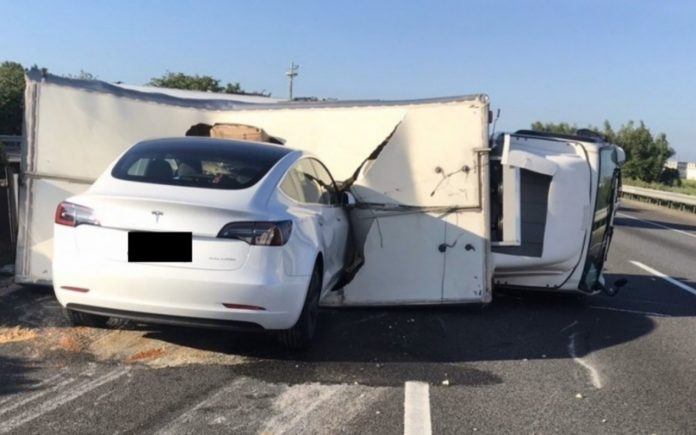 Self-driving vehicles always look cool on TV and films but getting them right in real life no easy task. Considering the human lives involved, autopilot systems are often put under intense scrutiny to ensure nothing goes terribly wrong. Unfortunately, things do go wrong to different degrees, and, fortunately for one driver in Taiwan, the story didn’t have a tragic ending, even if his Tesla met a different fate after crashing into the roof of a truck.

After numerous mishaps involving its autopilot system, Tesla added official warnings and clarifications that its feature, despite the name, isn’t meant for sleeping or playing behind the wheel. It still requires that drivers pay close attention to the road and be ready to take manual control at any time. Unfortunately for a certain Mr. Huang, even that didn’t go so well.

The driver of the Tesla insists that he hit the brakes when it was clear his car’s autopilot wasn’t going to swerve away from an overturned truck on National Highway 1 in Taiwan. His claim is supported by video footage showing smoke from the wheels as the driver tried to take manual control. Running at 110 kph (68.3 mi/h), it might have been too little too late to avoid the collision. Fortunately, the driver survived to tell his side of the story.

The report doesn’t make any assumptions on what went wrong. In the first place, Tesla’s autopilot system should have avoided the downed truck. It may have failed to properly identify the obstacle, suggesting a rather fatal flaw in its software. That, however, doesn’t exactly explain why the car didn’t stop even when the brakes were applied.

This isn’t the first accident that involves Tesla’s autopilot, of course. What’s slightly different is the claim and proof that the driver wasn’t completely inattentive, though he might have been too late to take back manual control by then. It’s even more puzzling that the car’s avoidance system didn’t kick in at such a large obstacle, a bug that Tesla will hopefully investigate and fix immediately before even worse accidents happen.

The Daily Dash: When will the freight market bears throw in...