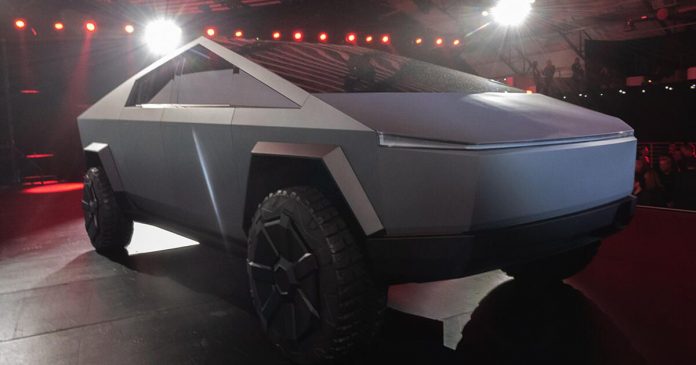 Tesla’s Cybertruck debuted last November, and even now, over a half a year later, it’s still one of the most polarizing automobile designs to debut in decades — maybe ever. In fact, you could say it’s driving a wedge between the various factions of the automotive community. Some people think it looks brutal, aggressive and rugged like some kind of electric, dystopian Matrix bro-dozer. Others think it looks like something that Ikea might offer as its first flat-pack vehicle.

But what do we actually know about it? More and more as it draws closer to production, as it turns out. In fact, on Wednesday, July 22, Tesla CEO Elon Musk confirmed that the new Cybertruck will be built in Austin, Texas, alongside the company’s forthcoming electric Semi, which has itself been delayed until 2021.

Well, to start, we know that the Tesla Cybertruck has a thick, unfinished stainless steel body. Stainless steel looks cool, but could present several problems, based on other companies’ attempts at making it work on a production vehicle — namely, DeLorean with the DMC-12. The material is tough and resistant to corrosion, but it’s also difficult to repair and almost impossible to paint. Tesla CEO Elon Musk claims that the body of the Cybertruck is capable of withstanding sledgehammers and certain types of small-arms fire. The vehicle’s glass, though? Not so much. It’ll need some mirrors, too, as Musk whacking a traffic pylon on the road seemed to highlight visibility issues. As it stands, it sounds like Tesla hasn’t quite finalized what the Cybertruck’s skin alloy will be made of. As recently as July 21, Musk telegraphed that there were metallurgical changes afoot for the new truck.

Subscribe to the Roadshow newsletter, receive notifications and see related stories on CNET.

How does the public feel about this futuristic doorstop of a pickup? Depends on who you ask. One early survey had the majority of American saying it didn’t impress them or they hadn’t even seen the electric pickup.

The Cybertruck’s dimensions put it in line with other full-size trucks on sale today such as the F-150, Ram 1500 and Silverado 1500. Specifically, the Cybertruck is 231.7 inches long, 79.8 inches wide and 75 inches tall, with seating for six adults. Off-road performance looks decent too, with a 35-degree approach angle, a 28-degree departure angle and up to 16 inches of ground clearance.

Those dimensions may cause headaches for future owners, though. An augmented-reality app showed the Cybertruck will likely have a tough time squeezing into typical US garages. It’s not really a problem unique to the Cybertruck, but nevertheless, the electric pickup will need a big space. Despite earlier reports to the contrary, it appears that Tesla won’t alter the dimensions of the original concept truck to make it more wieldy. However, a second, smaller model is possible… eventually.

Perhaps a Cybunker will be of interest to house the pickup. Yes, the Cybertruck is getting a companion housing unit, supposedly ready for construction sometime next year.

Also interesting is that, while the Cybertruck’s body may look like it would slice through the air with all the efficiency of a piece of farm equipment, it may not be that aerodynamically inefficient, according to some computer modeling done by an independent aerospace engineer.

Naturally, Musk piled onto that claim with more hype, saying that the Cybertruck could have a coefficient of drag of around 0.30 — around the same as a Ford Focus ST and much better than most trucks. The 2019 Chevy Silverado 1500, for example, claims a drag coefficient of 0.38 and while that 0.08 difference doesn’t seem like a lot, it is. It’s unclear how dramatically adding an actual windshield wiper would affect that 0.30 figure.

An essential part of any truck is its bed, and how effective that bed is at carrying stuff. The Cybertruck takes the traditional truck bed concept and adds some features that are both cool and likely very functional. The first is that the Cybertruck’s bed comes with a sliding, metal tonneau cover that’s lockable — making the cargo area much more secure than an open bed.

The Cybertruck’s bed also features a built-in ramp and multiple charging outlets for things like electric ATVs (which seem to use an awful lot of Yamaha parts). Tesla claims a payload capacity of 3,500 pounds, which puts it ahead of Ford’s best-specced F-150.

Yet, the Cybertruck may not be classified a light-duty pickup truck. Documents Tesla filed in California in December put the automaker on the record saying the pickup will “likely” boast medium-duty truck specs. That would make the Cybertruck an F-250 competitor, which far outpaces the Tesla’s pickup. It also may explain why the Cybertruck walked an F-150 away in a tug-of-war match up.

Inside, the Cybertruck is more spartan than even Tesla’s Model 3 — a vehicle which was considered incredibly minimalistic when it was introduced back in 2016. Like the Model 3, the Cybertruck has a large, centrally mounted touchscreen. It’s also sporting a not-at-all-wheel-like steering wheel, something we’d be shocked to see make it through to production.

Finally, Musk has claimed that the Cybertruck will be available with built-in solar charging. The system, he says, will be able to add between 15 and 40 miles of range depending on conditions, but he declined to state whether the system will be included with the truck, or available as an option.

Tesla Cybertruck is like nothing else, and it’ll be built in Austin

Tesla’s Cybertruck will be offered in three different trim levels, each with a different powertrain. The base model will feature a single motor and a range of around 250 miles. This version will be rear-wheel drive only, and Tesla claims it’ll tow approximately 7,500 pounds. The single-motor version will make the 0-to-60 sprint in a respectable but slow-for-Tesla 6.5-ish seconds. Tesla plans to offer this version for $39,900 before any incentives, but we’re not going to hold our breath for this one.

The next rung up is the dual-motor trim, which starts at $49,900 and features all-wheel drive. Tesla claims this midtier model will have a range of better than 300 miles and will be able to tow around 10,000 pounds. The dual-motor’s 0-to-60 time drops to around 4.5 seconds. We’d expect that this would be the trim level that most people opt for. It’s right in the price-to-performance sweet spot that other trucks currently occupy.

Finally, there will be a tri-motor all-wheel drive Cybertruck sitting at the top of the model range. This version will set buyers back just a shade under $70,000 — $69,900 to be exact — but for that money, you’ll get a range of around 500 miles and the advertised towing capacity of 14,000 pounds. That range claim is a big deal, and we’re not 100% sure how Tesla plans to make it a reality in such a heavy vehicle with three motors, but we’ll see. The tri-motor trim’s 0-to-60 time will hover at or around 2.9 seconds.

Of course, this being Tesla, the options list is basically nonexistent, except for the still-exorbitantly priced Full Self-Driving option, which is presently being sold for $7,000 with plans (or not-so-veiled-threats) to increase that number as the technology progresses.

Prospective buyers can plunk down a $100 refundable deposit for their dystopian dream vehicle now, but Tesla swapped production priority around in early December. Originally, the cheapest Cybertrucks (single- and dual-motor) were planned for production in late 2021. Now, it’s the tri-motor pickup that will go into production first, still in late 2021. In 2022, we’ll then see the dual-motor and single-motor pickups enter production.

Posts From The Road: Cloud Museum