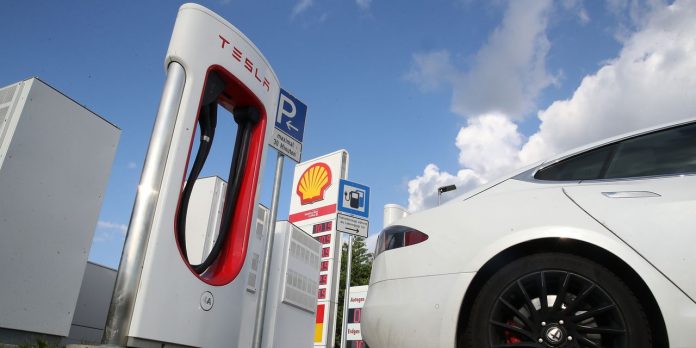 
Tesla
shares hit a fresh record Wednesday morning: $1,000 a share. The stock is being lifted by positive news about its battery technology along with the possibilities of new products.

A few things seem to be moving the stock while the Dow Jones Industrial Average is down nearly 200 points, awaiting the Federal Reserve’s announcement at 2 p.m. eastern time.

For starters, several media outlets are reporting the electric vehicle pioneer’s heavy duty semi-truck is ready for production. The truck was launched around 2017 and Tesla has signed up customers such as
J.B. Hunt Transport Services
(JBHT) and
Walmart
(WMT).

Tesla didn’t respond to a request for comment about semi-truck production.

In addition to Tesla’s semi-truck, shares got another boost from Wedbush analyst Dan Ives. He boosted his price target to $1,000 a share. It’s the third price target with four digits among large brokers, according to FactSet.

Ives still rates the shares the equivalent of Hold. But he was encouraged by recent Chinese Model 3 sales. What’s more, he believes Tesla has a growing lead in battery technology. That’s a much bigger deal.

“Musk & Co. are slated to announce a number of new potential game changing battery developments at its highly anticipated Battery Day,” wrote Ives in a Wednesday research report. “We believe the company is getting closer to announcing the million mile battery.”

Few cars run more than 200,000 miles. But battery durability is still a game changer because it raises the possibility of reusing batteries as well as supporting Tesla service vehicles—like taxis—which could run for years without fear of battery life degradation.

Tesla is planning to host a battery technology day later in June. Details haven’t been released yet. “The Street’s focus of the upcoming Battery Day will be reducing battery production costs to the key $100 [per kilowatt-hour] threshold,” adds Ives.

Electric car jargon is still confusing to car buyers. Here’s what that means: A Model 3 Sedan, for instance, can be bought with a 75 kilowatt-hour battery pack. Roughly speaking, the battery pack costs $7,500 to put in the car. Then there are the costs for battery integration and electric motors. That amount needs to be compared with the cost of an internal combustion engine, gear box and gas tank.

Tesla stock is now up about 140% year to date, crushing comparable returns of automotive peers, the
S&P 500
and the
Dow
over the same span.

Write to Al Root at allen.root@dowjones.com