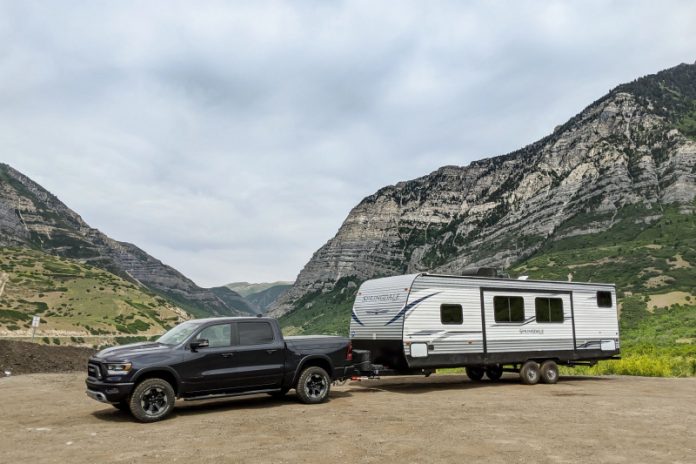 To test the EcoDiesel’sclaims, I drove two fuel mileage runs over a 107.2-mile route; one empty and one pulling a 5,000-pound travel trailer. The route started and ended below 4,600 feet in elevation and topped out above 6,900 feet. It included city streets, a freeway and a highway, which was the majority of the mileage. The steepest grades were around 10% with multiple climbs that were a few miles of consistent 7% grades.

It isn’t often that you climb into a truck and see an EPA-estimated range of 792 miles. With large fuel tanks and great efficiency, the new half-ton diesels can go a full day of freeway cruising without needing to stop for fuel. 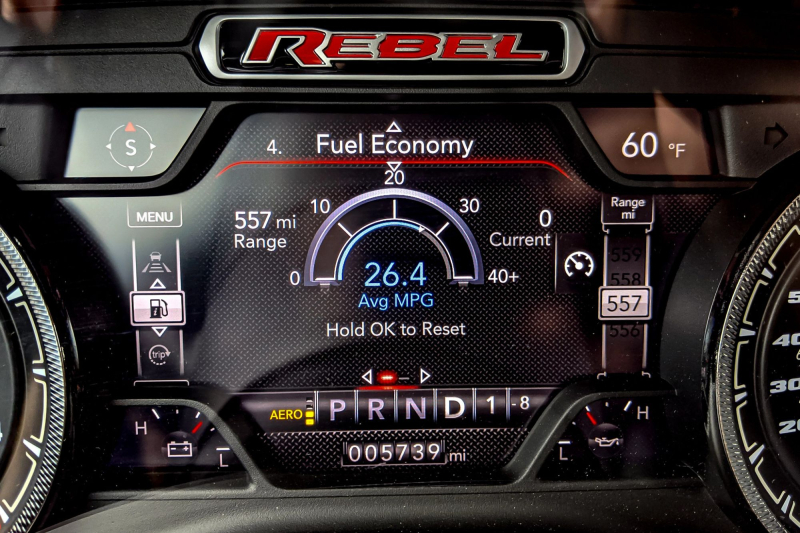 Over the 107.2-mile route, the Ram 1500 Rebel diesel displayed 26.4 mpg, which was a little optimistic when compared to my calculated mileage. The Rebel used 4.169 gallons of fuel over the route, which equates to 25.7 mpg. This puts the computer readout within about 3% of the calculated mpg. With the 33-gallon fuel tank, that fuel mileage provided a range of nearly 850 miles, enough to travel the full length of California from north to south. Not bad. 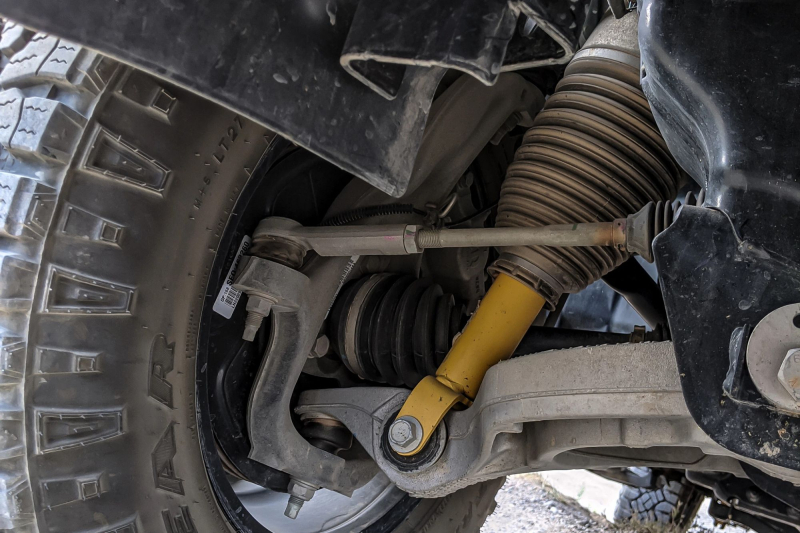 My test truck was equipped with the four-corner air suspension. For the empty run I set the height to Aero mode, which lowers the suspension for improved aerodynamics; the Ram enters this mode automatically at sustained speeds above 62 mph. There was no additional cargo in the truck besides the driver. It’s worth noting that this particular Rebel was fully loaded with the split tailgate, RamBoxes and many other amenities that added weight and reduced payload capacity. The payload capacity for this truck was just over 1,000 pounds. 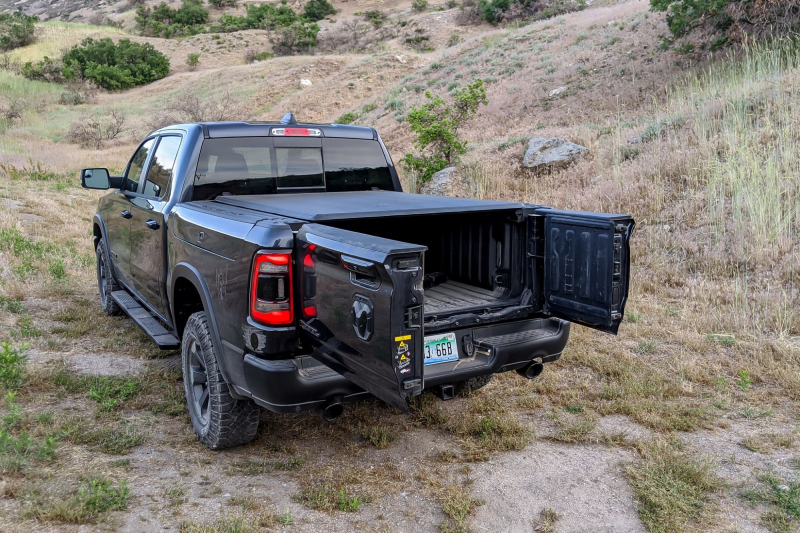 Off the line, the EcoDiesel has a slow throttle response when compared to its gas counterparts. This may be to reduce emissions, as the older EcoDiesels seemed more responsive off the line. As expected, the unloaded Rebel had no problems maintaining the speed limit during the whole route. There were only a couple of times that the eight-speed transmission had to downshift while climbing the steepest grades.

Driving empty is a comfortable experience with none of the harsh rear-end jolts normally experienced in full-size trucks. To me, the air suspension seemed to have the most supple ride in Aero mode, which is another reason I used this height setting for everyday driving. 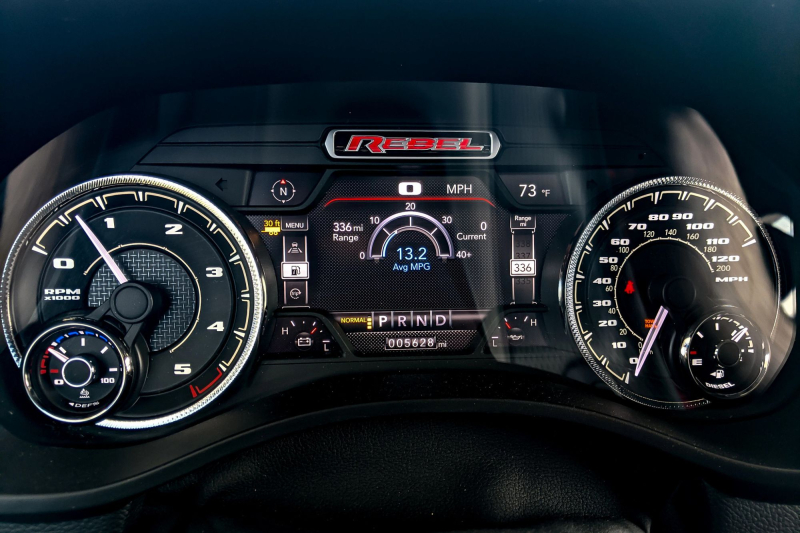 The four-wheel-drive crew-cab Rebel with the EcoDiesel has a maximum towing capacity of 9,750 pounds. For the loaded run, a roughly 5,000-pound travel trailer was attached with a 600-pound tongue weight using a conventional ball mount. While this trailer isn’t very heavy, it has the worst aerodynamics of any trailer I’ve tested (for my day job, I am a product engineer for Progress Mfg. Inc., a manufacturer of hitches and trailer products). In other testing, this trailer caused other vehicles to return worse fuel economy than trailers weighing more than double its weight.

With the trailer, the Ram 1500 diesel’s computer claimed 13.2 mpg over the 107.2 route. The truck burned 8.845 gallons of fuel, which yielded a calculated mpg of 12.1 This time the computer was off by 9%, which is a pretty significant difference.

The Ram’s owner’s manual recommends setting the suspension to normal height when towing, so that’s the height I used for the loaded run. Selecting the correct drop on the ball mount was a breeze because there is no guesswork with how much the auto-leveling suspension will sag.

The torque was great when accelerating up the on-ramp to merge onto the freeway. The EcoDiesel is not fast when compared to its V-8 counterparts, but having a trailer attached doesn’t seem to slow it down much. There was only one climb where I had to go full throttle for a moment to maintain the speed limit. This was on a section of highway with a long 7% grade that starts out with a stoplight near the bottom and has a 55-mph speed limit.

The EcoDiesel lacks an exhaust brake, and that was evident when heading downhill. The compression braking from the engine was good, but I needed to apply the brakes a few times. Normally, a couple of brake applications wouldn’t bother me, but this trailer creates so much wind resistance that it’s rare it needs additional slowing on most grades. An exhaust brake is one feature I would love to see Ram add.

When Does the EcoDiesel Make Sense?

With a price of $4,995 over the base V-6 and $3,500 more than the Hemi V-8, the EcoDiesel adds a considerable amount to the cost of the truck. It’s not likely that the original owner will recoup that cost in fuel savings alone, but used diesel trucks have traditionally commanded a premium resale price over gas pickups.

More important than the cost for many is the extended mileage range and high torque for towing. The Rebel EcoDiesel delivers in both areas with good power when towing and great fuel mileage when not.