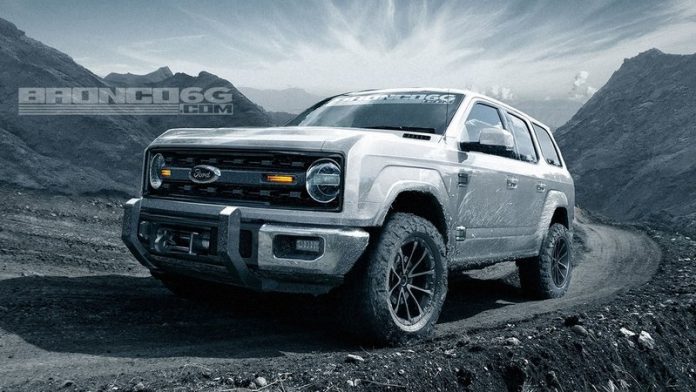 Let’s talk about the seven-speed gearbox first. The rumors about the Bronco featuring a stick shift and third pedal have been doing rounds since the very beginning. Apparently, Getrag was working on a seven-speed manual gearbox that was to be mated to the 2.7-liter, V-6 EcoBoost mill. We recently got to know that the Bronco will indeed come with the 2.7-liter engine, but it was said to be mated to a ten-speed automatic gearbox.

Now, however, the publication’s source has revealed that the seven-speed manual transmission is surely happening, but it’s not the conventional seven-speed box that you see in the Porsche 911 or the Corvette C7.

The source mentioned that only six gears are meant for highway driving, whereas one is purely a crawler gear. You can expect this to have a low gear ratio and it would be highly beneficial when you’re crawling over rocks or maneuvering beaten paths.

To think of it, this would make the Bronco a lot more versatile. It stresses on the SUV’s off-roading prowess. You still get six gears for cruising on the tarmac, which is more than sufficient for a vehicle that won’t do very high speeds. One dedicated gear for low speeds will make your off-roading experience a lot better. The publication also mentioned that Ford could engineer a lockout mechanism that would prevent you from going into the low gear unless you’re in four-wheel drive mode and have the transfer case in low-range.

That’s A Nice Mix Of Touchscreen And Buttons

The publication has received a picture of the center console that shows the infotainment system and the HVAC controls. The touchscreen infotainment system is neatly packed into a dedicated spot, unlike the latest trend of just sticking them on the center console like a tablet. The cowl-like top covering will help keep the screen visible even under harsh sunlight. It looks like a 12- or 13-inch unit and seems to preview Ford’s SYNC 4 system.

Right under this, you can see a set of buttons. At the top, there are two knobs on either side – one for the volume, that also doubles up as the system power on/off button, and the other one for tune. A special mention for the volume knob, which I believe, is a must no matter how big or sophisticated the touchscreen is. I’d prefer this function over form any day of the year.

Coming back to the buttons between these knobs, there are three dedicated buttons for previous, forward, and play/pause. You can also see switches 360-degree camera, Auto Start/Stop system, and parking sensors on/off. Unless this pic is from a lower-trim Bronco, it looks like the SUV won’t come with ventilated seats; or the button for that could be placed elsewhere. You can see a set of HVAC controls here as well. Nothing unique here except for the fact that the Bronco will feature a dual-zone climate control system.

The Bronco Might Be Offered With Two Different Tire Sizes

The final scoop is about two different versions of the Bronco. The source said that Ford plans at least two tire packages with different widths. One is expected to be a 255-millimeter setup, whereas the other one will be a 285-millimeter setup. The wider tires could be part of an off-road package, like the FX4 package. Even the Jeep Wrangler Rubicon comes with the same profile tires wrapped around 17-inch wheels. The 255-millimeter arrangement might come as standard on the low-end trims that are more suitable for street use.

The bigger tires might be offered only with the manual gearbox since they’ll be more suited for off-roading, which could also mean that the manual transmission won’t be offered on the lower trims.

Too many dots to connect, so we’ll wait for the official word on this.

The news about the manual gearbox comes without any supporting evidence, so take it with a pinch of salt. It does make sense, however, to have one dedicated low gear, that would work only for crawling and could be engaged only from a complete salt.

Hopefully, the Bronco will debut in the coming month and we’ll then have a clear picture of how this works.

What are your thoughts on this gearbox; would you prefer a straightforward seven-speed gearbox, or does this arrangement make more sense here? Share them with us in the comments section below.