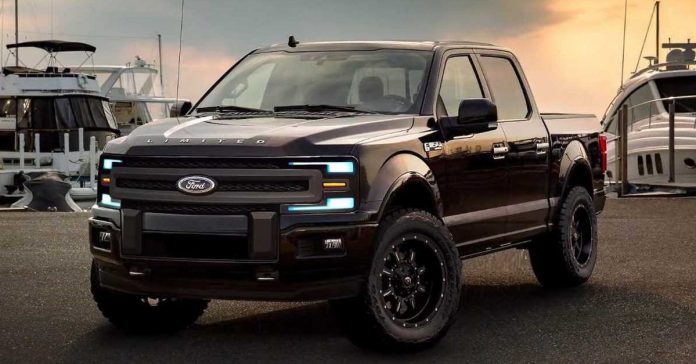 Ford spruces up its classic and strong-selling truck with some new bells and whistles for 2020. New images of the 2021 F-150 pickup have been leaked this spring, and Car and Driver has reported on what you’ll find under the hood, behind the wheel, and in the truck bed.

Here is what you can expect from the next generation Ford F-150:

…and other minor body changes. Overall, Ford knows that the truck they have is already selling, so there won’t be too many departures from the current body shape, and only expected improvements in performance. When it comes to the exterior, even the major difference might be hard to spot on one look: both the headlights and tail lights are slightly different, as is the nose shape.

Car and Driver says the 2021 will have a similar wide variety of engine choices inside to the 2020: “a 3.3-liter V-6, a 5.0-liter V-8, a twin-turbocharged 2.7-liter V-6, a twin-turbocharged 3.5-liter V-6, and a 3.0-liter turbo-diesel V-6.” More surprising is the rumor of a hybrid version. It’ll offer about 10 miles of electric-only driving, but that might not be the reason Ford is putting a bigger battery in their flagship pickup. Instead, the hybrid electric motor will also be able to be used as a portable generator, so workers who bring the truck to a site can use it to plug in lights or tools.

Rumor has it that an all-electric version is coming along down the pipeline, but not as soon as 2020/2021. A rumor that a plug-in hybrid version was on the way was floating around too, but Ford followed up and told Car and Driver that isn’t the case.

RELATED: 15 Things You Should Know About the Ford F-150 Raptor

The F-150 Raptor, the performance platform version of the truck, will likely come out after the other versions of the truck have already become available on lots, putting it some time in June. Rumor has it the new Raptor will run on a 760-hp supercharged 5.2-liter V-8 borrowed from the the Mustang Shelby GT500. Again, this is a case of Ford competing primarily with the Dodge Ram in this sector. They’ll want to have something lined up to go head-to-head with the upcoming Ram 1500 Rebel TRX, which is rumored to have a  707 hp Hellcat engine. Ford is promoting 760 hp in response, but it’s all as speculative as next year for now.

Ford is keeping an eye on Ram in particular when it comes to tipping customers’ preference toward riding in the F-150 cab. Since the cab is offered in pretty much the same variety of layouts as the previous model,  not much change is expected in terms of how and where you’ll sit or stash your gear in the 2021 model. But infotainment is another arena in which Ford is likely keeping and eye on Dodge to make sure the tech in the Ram doesn’t tip a potential customer into the other truck’s camp.

Keep in mind that the exact specifications of the interior are speculation right now. We’re hesitant to put too much stock in spy shots, although some do exist.

In the realm of more concrete facts, Car and Driver says the 2021 will sport a 8.0-inch infotainment display, with an optional upgrade to a 15 inch screen. It runs on Ford’s regular Sync 4 software. The screen will be more square than the one available in previous models. That optional upgrade puts the F-150’s screen at a significantly larger and more readable dimension than the Ram’s optional 12 inch vertical display. If you shell out the cash for the Limited, King Ranch, and Platinum models the cab will feature luxury touches, meaning more premium materials and styling.

There’s something to be said for not fixing what ain’t broken. Ford is responding to market competition and also knows what works.

NEXT: 10 Times Ford Made A Bad Pickup (5 Times They Blew Everyone Away)

Megan Crouse is a professional writer and editor who has covered manufacturing and product design for five years. Her B2B tech news articles have appeared in Manufacturing.net, Product Design & Development, and FierceTelecom. She holds an English degree from Fairleigh Dickinson University.