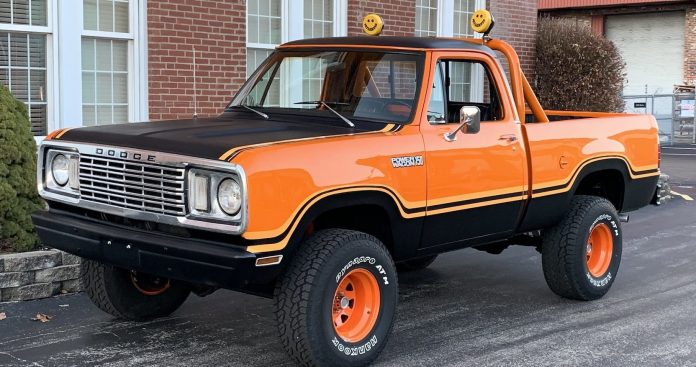 Pick up trucks were always underrated vehicles in the car industry. Not only that they’re not appreciated for all the work they do, but also old ones are always either parked out back, sold for very cheap, or just left to rot. On the other hand, the collector community treats muscle cars and other sedans as artifacts.

RELATED: Every Gearhead Should Own One Of These Underrated Classic Pickup Trucks

Here are 10 classic pickup trucks that you should think about modifying. They aren’t dirt-cheap, but at the same time, we believe that in a couple of years they are going to get too expensive.

The C10 Cheyenne was sold only from 1967 to 1972. However, Chevrolet’s “Action Line” vehicles include some of the most beautiful American pick-up trucks ever built. The best ones were of course in the last years, when Chevrolet introduced more car-like features to the pickup.

The Cheyenne had new disc brakes and a standard radio, which was quite unusual for the 70-s, special trim, and a very luxurious interior. All the Action Line pickup trucks are worth modifying and owning, but the Cheyenne out of all of them deserves to be resurrected.

Late is better than never. That was probably GMC’s motto when they finally created a muscle car truck in the early ’90s. They fitted the Syclone with a turbocharged V6 engine that delivered 280 horsepower. And the result was truly fascinating.

They made a car that could keep up with the Ferraris of those days. Only around 3000 were produced, and most of them were saved. Which makes it an amazing truck to modify, and perhaps put a V8 instead of the V6. If you come across one, make sure to pay attention to it.

Unfortunately, the ’70s weren’t a great time for muscle cars. Starting from high insurance rates, to the gas crisis and lastly the emission regulations, they all contributed to the dissolution of the muscle car in America. However, someone smart at Chrsyler found out that such laws don’t apply to pickup trucks, and they went on and designed the Lil Red Express.

The Lil Red was based on the lightest Dodge truck, and fitted with a 360 inch V8 that delivered 225 horsepower, and it was the fastest American car to go from zero to 100. Although its styling might not be great, this pickup truck can be modified to an even higher performance version, and you’ll have a classic worth ten times more than the value you bought it for, in only a couple years.

Who doesn’t love a classic Japanese pickup truck? Calling the FJ40 trucks icons is truly an understatement. They were launched in 1960 and built until 1984 in Japan, but continued until 2001 in Brazil. The FJ40 is one of the trucks that can literally go anywhere without a fear in the world.

However, the pickup model is much rarer than the famous 4×4. If you’ll ever find one, you should immediately keep an eye on it, since they are some of the most desirable classic pickups. However, some might need to restore, and with the modifications in your mind they can turn into gorgeous collector pieces.

Sometimes the only way for classics to stay on the roads is through restorations and modifications. And although they are plenty of the F-Series from the fifth generation in the streets, some car enthusiasts will have to make sure things stay this way.  Because it’s truly one of the trucks that can be accepted as an ultimate classic.

Moreover, the fifth generation with its clean and boxy look went on and defined the entire upcoming generations of the F-series. It was revolutionary in the sense of comfort, safety, and engineering. Finding one nowadays can be pretty easy and affordable, so the only question you need to ask yourself is how crazy you can go with it.

Okay, before you go on and read what we have to say, we have to warn you that there aren’t so many cheap Scramblers left anymore. But, their value will surely go only up, so modifying one and selling it in a few years can be very profitable, if that’s what you want.

Keeping it for yourself and modifying it to your own taste isn’t a bad choice either. The CJ-8 is a legend among trucks that can do anything, but at the same time serves as a performance vehicle. It’s a Jeep, after all.

Probably the truck with the cutest name ever! And looks! After all, Volkswagen couldn’t miss on the thousands of compact trucks being built during the ’70s. It’s surely a weird choice, but also eccentric, and with the right modifications it can really make you stand out.

The Rabbit pickup was produced in the U.S. only until 1984, but it kept on going until 1992 in Europe. Usual customizations include swapping out the 1.5-liter diesel engine for a bigger gas engine, or changing the suspension, and anything that can make it more performance-oriented. We’d definitely suggest changing the wheels, and bumper for better looks.

Just like many other famous trucks, Dodge started its life in the army during World War II. It launched in 1941 as the WC, 1/2 ton, four-wheel-drive truck for the U.S Army. Only after the war ended, the Power Wagon began selling in Dodge dealerships, becoming also the first factory-built 4×4 truck.

This truck was sold in the United States until 1968, and after it couldn’t meet emission regulations it was built only for export for at least another 10 years. They are great vehicles for modifying not only because they are extremely durable and reliable, but also because they are historic.

The Cameo Carrier was truly revolutionary for the ’50s. Back at that time it was crazy to think that a truck can be more than a vehicle for work. But instead, Chevrolet introduced a car that was fast, beautiful and comfortable to drive and work. To say the least, it influenced almost every pickup truck we know to exist.

It was fitted with a chrome trip, carpets, a radio and quite a powerful engine-at least more better than anything in the market. However, although its sales peaked in the beginning, after a while due to the increasing competition the Cameo was discontinued in 1958. Unfortunately, most of them available are either very rusty or very expensive. If you happen to find one in a very bad condition, and modify it to the maximum-we can only congratulate you.

So you’re still nostalgic about the ’60s era of the muscle cars. You’d love to get one, but those beautiful pieces can be challenging to own due to the crazy collector market. And at the same time, you need a truck for work. Well, we have some good news for you. And that’s called the Dodge Custom Sport Special, a rare pickup truck offered by Dodge during the glory days of the muscle car.

Most of them are fitted with a 426 cubic inch V8 engine which could deliver 365 horsepower, and as much torque as you need. It’s truly an underrated truck, that if people are smart enough, are going to start wanting pretty soon. Now it’s a better time than ever to buy this classic, restore it first, and then modify it to your taste. And boom! You have everything you’ve ever wanted.

NEXT: 15 Pictures Of Abandoned Classic Pickups That Move Us To Tears


Next
These Modified Muscle Cars Are Worth A Fortune

Vasilii Kulev is a marketing specialist during business hours and a gearhead in his spare time. He received a dual degree in Journalism and Marketing from the American University in Bulgaria.

Apart from cars, his other major hobby is music, and he’s working on expanding his collection of vinyl records. Vasilii currently drives a 1997 Mercedes-Benz CLK 200K coupe and loves it.