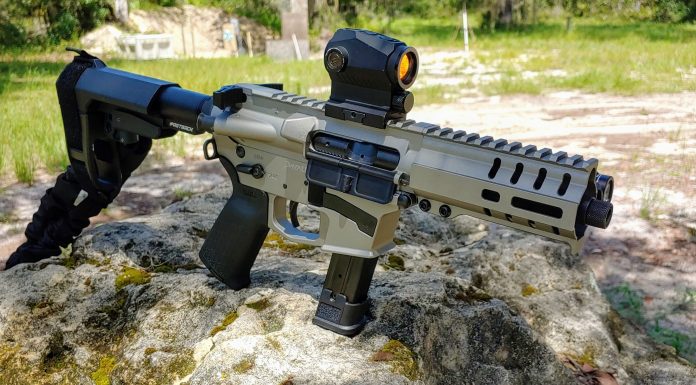 The P320 by SIG Sauer has entered into a long legacy of military handguns. It is the first strike fired polymer handgun to do so. The SIG won the MHS contest, and on top of that, it has also become a popular handgun for law enforcement agencies. The P320 is going to be sticking around for a very long time. CMMC, a revolutionary AR manufacturer, has embraced the P320 and now produces the Mk17 variant of the Banshee AR pistol.

The Banshee AR series of handguns is known for being ultra-small and ultra-lightweight. The Mk17 is the latest model and a reference to the M17 handgun — which is what the P320 goes by in military speech. The Banshee series comes in various configurations. The 300 series is the premium grade model that incorporates numerous features.

The Mk17 ships with one single 21 round SIG Sauer magazine, but many are available at various capacities.

All About the Banshee Mk17

This is a feature-filled gun — I don’t even know where to start. Logic says, let’s start at the top and work our way down. The barrel is five inches long, and threaded ½ x 28 for easy suppressor adaption. It is surrounded by a short rail system called M-LOK and is just enough to toss on a light. On the top, we have a full-length rail able to accommodate optics, lasers, and lights.

The underside is far front mil-spec, and that’s a good thing. It incorporates a unique magazine release that is placed far enough rearward to accommodate a trigger finger reload. With pistol magazines, this tends to be a problem, and most purpose-built PCC AR 15s have a magazine release that’s tough to reach and far from ergonomic.

Past that, the Banshee Mk17 has an ambidextrous safety and a massive ambidextrous charging handle that is very easy to engage and rack. The pistol grip is a Magpul MOE model. The pistol brace is called Ripstock. It’s a specialized SBA3 brace made by CMMG; it allows you to extend it instantly with a quick pull. A set screw allows you to set the max length and extend it to that length with nothing more than a quick movement. The brace offers a QD port for a sling; the rear plate also offers two sling ports.

Ergonomics of the Banshee Mk17

As we mentioned above, the Banshee Mk17 features an excellent magazine release that is pushed back far enough to make magazine swaps very quick and easy. It’s a massive pad that allows for easy magazine drops. It sits right where your finger naturally rests when it’s straight and off the trigger.

The charging handle is like a set of wings. This thing is big enough to let the Banshee Mk17 fly. This makes it easy to engage with a variety of grips and techniques. I can blade the charging handle rearward incredibly quickly, and due to the large size, I have no problems locking the bolt to the rear.

Speaking of, this is one of the few AR 15 style PCCs with a last round bolt hold open. It uses a standard AR 15 bolt lock and release which has always been an ergonomic option.

To say I was excited to hit the range with the Banshee Mk17 is an understatement. I really enjoy PCCs and find them to be super fun to shoot and handle. I loaded up my SIG Sauer magazines and hit the range with a range bag full of ammo and a few extra magazines.

The first thing you notice is the lack of recoil. The CMMG Banshee Mk17 and its radial delayed recoil system makes the gun a very soft shooter. Most blowback systems deliver a significant amount of recoil for a pistol caliber carbine. The radial delayed system ensures that the recoil is quite low and that the weapon is absurdly easy to control. It hardly moves, and its 5-inch barrel is perfect for a 9mm platform.

The trigger is a refined mil-spec trigger that is light and crisp. It’s not a match grade trigger, but it’s more than adequate for a weapon designed for inside of 100 yards. Speaking off 100 yards after I zeroed my red dot sight, I simply started backing up from 25 yards to 50 to 75 and finally 100 yards. At 50 yards, the gun is a freaking laser beam. I can stack rounds into the chest of a man-sized target with ease.

Even out to 100 yards, I can hit the target with a lot of range estimation. There is about a foot of drop at that range, and I need to aim quite a bit higher to make the steel go bing!

The CMMG Banshee Mk17 is a beast when it comes to eating ammo. It will take whatever you toss at it and digest it without issue. This includes cheap Tulammo all the way down to M17 JHPs that currently serve as the military’s load of choice.

It can be a stellar home defense weapon, a truck gun, or even a duty weapon for a SWAT team. The U.S. Army has recently adopted, for the first time in decades, an SMG for VIP protection. It’s a shame the CMMG Banshee wasn’t around to compete at the time. Its compatibility with P320 magazines makes it a natural choice for the U.S. Army, but hey they missed out. The good news is you don’t have to. Check it out now.

You’ve seen my Banshee. I’ve made it my own. If you like my model, then check out my upgrades:

This budget-friendly red dot optic is quite robust and made to last. It’s an overall excellent design that incorporates many modern features and is a perfect optic for a PCC.

A gun as short and as light as this doesn’t really need a sling. A good tactical single point is an excellent option for supporting the weapon and keeping it pinned to your body.

The Magpul MOE grip is included with the gun and is smart enough to have a hollow core with an easily openable compartment. I shoved an Operator Survival Tool into the pistol grip. This provides me with a knife sharpener, a flint, and AR 15 cleaning tool in an ultra-small design.

The new Streamlight TLR RM1 is a brand new light. It is an ultra-compact WML and perfect for mounting to the Banshee Mk17. It sports a unique ramping design that allows you to mount the light to the top of the rail or to the side, as I have done. This 500 lumen, 5,000 candela light, is perfect for close-quarters use.

The gun only comes with a single magazine, but plenty are available. The Banshee can use various calibers and sizes, and Brownells carries them all.