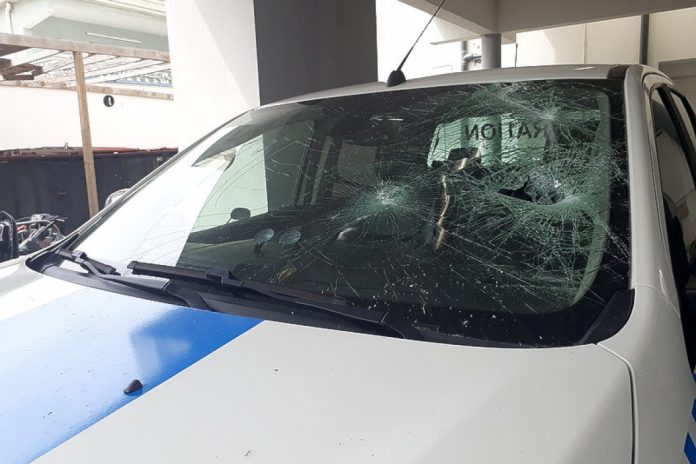 The windshield that was damaged by the stone throwers.

DEFIANCE–The St. Maarten Police Force KPSM arrested three persons around 1:00am Wednesday after a high-speed chase ended with persons in the Defiance area throwing stones at a police vehicle and breaking its windshield and side windows.

A police patrol spotted a red Suzuki in the Philipsburg area driving towards Sucker Garden. Because it was during curfew hours, officers attempted to stop and control the vehicle.

When police commanded the driver to pull over, he ignored them and sped away. The officers were then led on a high-speed chase in the direction of Defiance.

Persons in the area also began to throw stones at the police when they saw what was taking place. The officers were forced to retreat, and stepped back into the police vehicle to avoid being injured by flying projectiles.

However, the stone throwers continued to hurl rocks and other heavy objects, damaging the police vehicle’s windshield and shattering several of the side windows.

A woman who resides in the home came outside and began to threaten the officers.

With all the commotion, the officers called for back-up and several other police personnel came to the scene to lend their colleagues a helping hand.

Police then attempted to arrest the Suzuki driver. According to police, he resisted the arrest and had to be “forcefully detained.”

Meanwhile, the woman assaulted a police officer who was carrying out the driver’s arrest, said police. She was subsequently arrested for this act.

Police also searched the area to find and arrest the stone throwers. Officers managed to locate one of them and arrested him for the part he played in damaging the police vehicle.

All three persons were taken to the Philipsburg police station and incarcerated pending further investigation.

“The St. Maarten Police Force would like to send a stern warning to these who took part in the throwing of the various objects at the officers in the hope of obstructing them from completing their duties. The officers have collected information about the other persons involved in the stone throwing and more arrests will be made in the days to come.

“These actions could have resulted in serious bodily harm to the officers and this behaviour will have serious consequences. Officers are set in positions to uphold the law, but it is only with the help of the community we can do our jobs to the best of our ability,” said police in a press release on Thursday night.

Worksport™ Enters into US $70 Million OEM Agreement for TerraVis™ with...

FSMEs recommend testing of truck drivers in their countries, be issued...