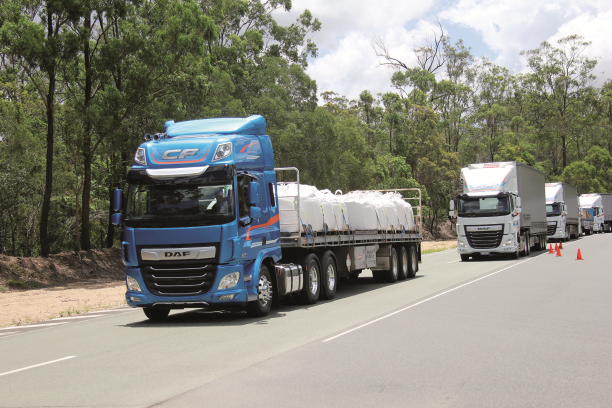 Few trucks have undergone such a comprehensive makeover as the DAF CF which has been upgraded to be much more than merely compliant with Euro 6 emission standards.

It used to be a school of thought in which a DAF was considered a truck to buy if it was to be a function of a business, rather than the business itself. If the truck was to be the main element of the business of moving freight for reward, then other brands including its PACCAR stablemate Kenworth were more likely to be on the shopping list.

Hence DAFs were regarded as somewhat of a niche player and were favoured by the likes of farmers, the equine industry and crane truck operators.

But not anymore! This latest DAF CF (and its big brother the XF) are up there with the best that Europe has to offer in terms of rigids and prime movers.

Essentially, every important component of the truck has been reassessed and, if necessary, re-engineered to provide this next generation of DAF models with an edge in transport efficiency, safety and driver comfort.

To achieve the aim of best in class fuel economy and driveability requires almost perfect integration of all components and to this end new driveline software and new electronic control units have been employed to deliver optimum interaction between the engine, exhaust after-treatment system, transmission and rear axles.

This is a truck intended for application throughout the world and since the Euro 6 DAF XF and CF models were introduced in Europe less than two years ago the brand has increased its European market share to record levels and received a swag of industry accolades and awards.

Locally the Euro 5 range has held a steady 3.4 per cent share of the Heavy Duty market in 2019 and the improved specifications and increased range available in these Euro 6 models can be expected to add substantially to DAF’s slice of the Aussie Heavy Duty pie.

In the new Euro 6 guise, power from the 13.0 litre PACCAR MX-13 engine has been increased by 20hp in each specification to 480hp and 530hp respectively.

A new 11.0 litre MX-11 will be available here around September which will supersede the current 9.0 litre MX-9 and will be offered in 370, 410 and 450hp ratings. As well as the 13 litre models Prime Mover had the opportunity to drive one of the first 450hp 11-litre CFs and it impressed with its ability to ‘hang on’ the steeper climbs with its gross weight just above 42 tonnes.

DAF engineers say the operators employing the Euro 6 engines can expect up to a ten per cent improvement over the already competitively fuel efficient Euro 5 versions which represents DAF’s largest ever fuel efficiency improvement in conjunction with a model change.

The MX-11 and  MX-13 engines use of EGR, SCR and a diesel particulate filter contributes to minimising emissions and delivering good fuel economy without compromising the use of AdBlue, the consumption of which remains similar to DAF’s Euro 5 trucks. Most operators include AdBlue as a fuel cost so keeping consumption of it down will add to the bottom line.

There is more torque at lower revs across the entire engine range  permitting the use of faster rear axles which enable the trucks to stay in higher gears for longer. The Variable Geometry Turbocharger provides higher boost pressure at lower revs which is an important factor in achieving the increase in torque.

The engines have a new EGR system and a new valve actuation design. Thermal efficiency has been enhanced by developing a new combustion system, including new pistons, injectors and injection strategies, while higher compression ratios are also used. DAF has innovatively addressed parasitic losses from the engine by utilising variable speed pumps for cooling, power steering and oil to achieve lower fuel consumption.

The cooling systems have been increased in size by 30 per cent and in combination with improved air flow management are able to dissipate the slightly increased heat generated by the Euro 6 engines at the same time as cutting engine fan operating times by half, again contributing to fuel efficiency despite the increased horsepower ratings.

As with many European (and some Japanese) manufacturers DAF has embraced the TraXon automated manual transmission from ZF.

Note that the TraXon is 35 per cent quieter than the ZF ASTronic used in the Euro 5 DAFs. The TraXon is stronger overall to accommodate the increased torque and higher gear ratio spreads and the design has lower internal friction losses making it more economical. The 12 speed TraXon is standard and a 16 speed is optional.

The attention to detail in the quest to reduce fuel use carries as far as the rear axles which logically have ‘taller’ ratios and also feature improved rear wheel bearings to reduce friction losses.

By changing from 3.4:1 to 3.09:1 final drive ratios at 100 km/h, the engine speed has dropped by 150 rpm. The new CF cab exhibits a different look from its predecessor with the new grille not appearing as ‘open’ and a more rounded shape on corners of the cab to reduce drag. New gap closures between the headlight and the corner deflector provides improved aerodynamics.

Light emitting diodes (LEDs) are used instead of globes in the headlights, tail lights and daytime running lights providing the benefits of higher outputs and more durability with lower energy consumption. Turning lights and fog lights are standard equipment.

Should the suite of safety systems ultimately be unable to prevent an accident DAF has developed its Protective Cab Suspension Construction, a proprietary technology that helps to absorb a significant part of collision energy but allows for a controlled rearwards movement of the cab along the chassis thus protecting the driver who also has a driver’s airbag and pretension seat belt to minimise the risk of injuries.

A safer driver environment is not limited to the active safety systems of the new DAF. The ergonomic design of the cab interior helps maximise the driver’s attention to the road through the larger windscreen and windows and the customisable dash layout with interchangeable switches allows the driver to configure it to their individual needs.

From a driver’s perspective the over-riding sensation is the quietness of the interior which exudes a high level of quality and driver comfort with new warm and tasteful colours on the dashboard, seats, curtains, mattresses, side and back walls.

The new fully automated HVAC system provides a comfortable environment regardless of the outside conditions and contributes its own four per cent improvement in fuel efficiency by utilising residual heat from the engine for heating the cab during shorts breaks and a smarter control of the evaporator to avoid unnecessary cooling.

In sleeper cabs the climate control system may also be operated using the new rear wall panel with its own temperature display.

A key principle when developing the new drivelines was to reduce engine revs for improved fuel efficiency.

An important part of fuel economy comes down to how the driver operates the vehicle and the Driver Performance Assistance (DPA) feature offers constant feedback to the driver of their driving style and is effectively positioned so the driver can easily see the driving effects on fuel consumption.

PACCAR Australia commenced local assembly of DAF trucks in September 2018 and since November 2018 the General Manager of DAF Trucks Australia has been Spaniard Felipe Rubio who decalres with conviction, “The new models are the biggest thing to happen to DAF in its 21 years of history in Australia.”

Look! This Isuzu pick-up truck is a tipper too – Gulf...