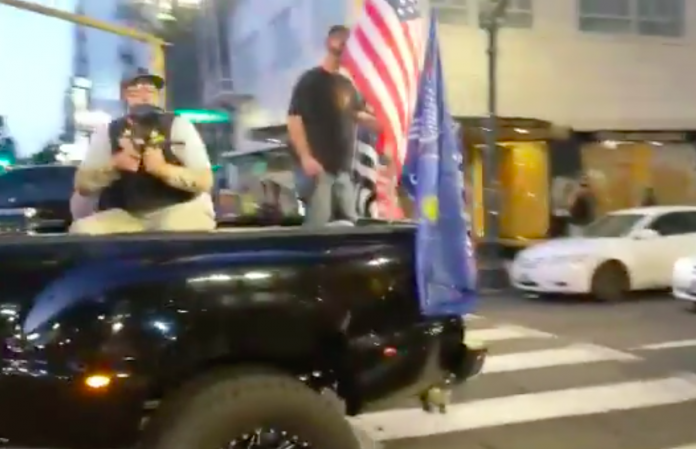 Every presidential campaign has an image — a chicken in every pot, a bull moose, a comic book image with the word “Hope” on it — and President Trump now has an indelible one for his: pickup trucks ramming into civil rights protesters.

More searing videos are emerging out of Portland this morning, the most horrifying of which was posted by Portland journalist Cory Elia, which shows the drivers of two Trump-flag-festooned pickup trucks trying to run over protesters before cloud of Mace (or other repellant) is fired from one of the trucks, dispersing some protesters.

A large object is hurled from a third truck in the motorcade:

Driving through crowds and macing out of vehicles at SW 4th and Washington. pic.twitter.com/dCNJxYlkYn

Seen from another angle, one of the apparent Trump supporters in a pickup truck fires a paintball gun at protesters.

On Thursday, Trump’s aides said they were hoping to see more violence and chaos as part of their reelection strategy.

The Trump tweet to which journalist Matthew Yglesias referred is this one, where the president apparently describes what he’s seeing in such videos as “LAW & ORDER!!!”:

It’s not surprising that the president would mistake violence for order. As New York Times columnist Nick Kristof pointed out in his indispensable summary of lawbreaking in the Trump circle, “What distinguishes this White House on law and order is simply its ties to criminals: Eight associates of Trump have already pleaded guilty or been convicted of crimes since he took office.”

“By any objective measure,” Kristof also reminds, “the bigger risk comes from right-wing extremists.” (It appears that one of those extremists was shot in the melee, though as of this writing it is unclear by whom.) White supremacists have killed 329 people in the last 25 years, and anti-facsists have killed none, according to one study (though one death was attributed to antifa — the death of an attacker).

NewsMax reporter Steve Gruber captured the essential image (and added in a prediction that is increasingly becoming more accurate):

Not all the counter-protesters in Portland on Saturday were violent of course, but the image of flag-covered trucks with menacing passengers remains the dominant one:

This isn’t the official route of the Trump rally, but there is still an endless stream of Trump vehicles coming in to downtown Portland. pic.twitter.com/h0zg8WMVtg

Of course, Trump himself loves the imagery of oversized trucks symbolizing his presidency. Last month, he used two massive Chevy Silverados at a campaign event at the White House. The red Chevy symbolized his administration’s disregard for environmental law and the blue Chevy (get it? Red and blue…) represented how our economy would be damaged by rules to require companies to protect the air, water and soil.

He also loves the imagery of two White people standing on their front law with guns, menacing peaceful protesters. Indeed, those two people — Mark and Pat McCloskey — got a prime-time speaking slot at the Republican convention last week.

SAPD: Woman killed after getting hit by pickup on North Side