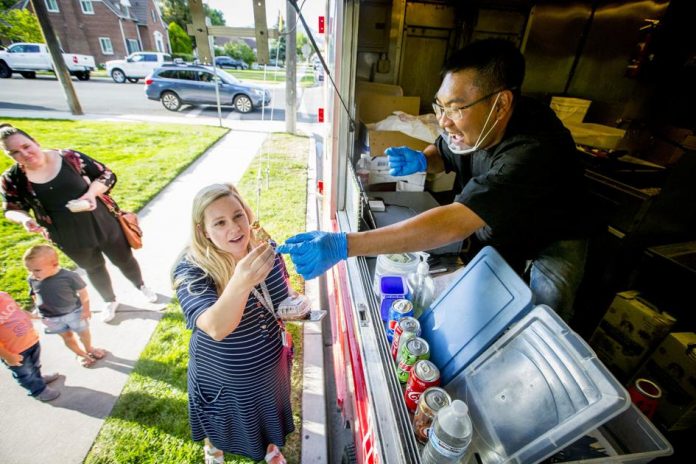 Five years after its founding, the Food Truck League is working double time to organize events that bring local food vendors and Utah County residents together.

In 2015, Taylor Harris was working as an investment research analyst by day and attending classes to earn his masters of Business Administration at night. Despite his hectic schedule, when his friend and business partner asked him about a possible venture, Harris was immediately intrigued.

His friend had been developing the concept of a food truck events and marketing organization for some time, and he was looking for someone who could offer a business perspective to help get the idea off the ground.

Harris had heard of the concept before in larger markets but was unsure of how it would look in a more rural state. He knew, however, that Utah was growing exponentially and food truck restaurateurs were facing bigger and bigger hurdles, so he signed on.

“We didn’t know what it would turn into but the idea was to provide services to help trucks have more opportunities,” he said. “There was less than 10 trucks that could stay in business for over a year. Trucks would start up, but they would often go out of business quickly.”

When Harris agreed to help Christensen, he was excited for a part-time commitment that would give back to local communities and support entrepreneurship. He was happy where he was in his professional and academic careers and was keen to remain in the investment industry.

In a matter of weeks, The Food Truck League had flourished, and Harris’ obligations to the entity he had helped found were becoming greater. He was reaching a breaking point where he would soon have to decide between the career that provided security and the job with which he was falling in love.

In the midst of the decision-making process, Harris discovered his wife was pregnant.

“I had to choose to either quit my job and lose my insurance and the stable income, or let this thing die because I wouldn’t really have time for it,” Harris said. “So I quit my job.”

Harris, his wife and their first child lived off their savings accounts with little-to-no income coming in from The Food Truck League. The following months were incredibly hard for Harris and his family.

All of that came to a boil just before midnight in a deserted parking lot.

“I remember I was in a parking lot one night carrying a truck’s garbage bag after an event,” Harris recounted. “The garbage bag had a hole, and it began to leak on my leg. I thought, ‘I have an MBA, I quit my job and I’m carrying trash at midnight in a parking lot. What did I do? That was an awful decision.’”

Despite the overwhelming anxiety Harris was experiencing, he pressed on, continuing to grow The Food Truck League with his team members. As the organization grew, so did the support for food trucks in Salt Lake and Utah counties.

From only 10 trucks that were able to stay open for more than a year, there are now over 100 trucks that have been able to keep afloat well beyond their first anniversary, he said.

Food trucks, Harris said, bring an incredible amount of diversity and talent to the local food industry. Additionally, food trucks get people out of their homes in a safe way that also encourages them to spend at other local businesses.

“When people eat at a food truck, they go get food at food trucks and stop somewhere else while they’re out,” Harris said. “It makes people happier in communities because they’re running into their neighbors at the food truck watering hole.”

Since the beginning of the pandemic, food trucks have seen one of the biggest impacts, Harris said, and this is because trucks rely on two industries: events and food service.

Most food trucks have switched into survival mode as they try to outlast the coronavirus pandemic and economic recession. Harris said a lot of food trucks aren’t expecting to make a profit this year and are just looking to break even so they can afford to serve events in the future.

“For a lot of food trucks, these really big events are where the profits for the rest of the year come from,” he said. “They serve so much food at those events. They really can’t replace that.”

In an effort to help support the local food industry, The Food Truck League hosts an online food truck locator for residents to use. Additionally, the organization hosts almost nightly events for residents to come together, eat food and support local entrepreneurs.

To remain in compliance with health regulations, The Food Truck League has converted its League Nights into Takeout Nights where residents can find a soirée of food trucks in a nearby area, stop by for a moment to purchase different food and eat in their cars or back at their homes.

Several hundred food trucks work with The Food Truck League to attend Takeout Nights and other events throughout the year.

Harris said his favorite part of the events is seeing the community come together.

“Philosophically, I feel like our world is so closed off,” he said. “Everyone drives in their box cars to their box houses to watch box screens. We’re part of creating a space where people can connect with their neighbors again, connect with their communities again, and see how amazing people are around them.”

Hosting gatherings has been incredibly difficult due to the coronavirus pandemic, but Harris said outdoor events, as long as social distancing and protective equipment regulations are followed, are relatively safe.

“We’re worried that we’ll get lumped in with everything else and they’ll shut things down,” Harris said. “If we shut down the outdoors, it will make the problems worse.”

According to a study by Koen Swinkles published by Medium, only 3% of super-spreading events, or events of five or more people where multiple people are infected with COVID-19, were outdoors.

Of the over 1,100 super-spreading events recorded globally at the time of the study’s publishing, 97% of the events were held indoors.

Bicyclist injured in crash with pickup in Bent County

How online platform is helping to unlock truck delays across borders