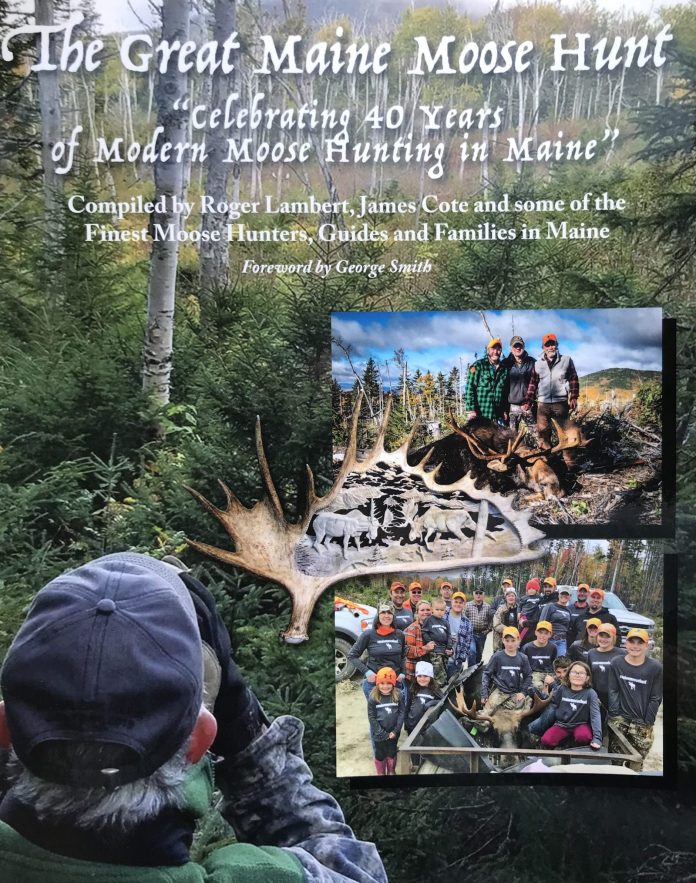 The Great Maine Moose Hunt, a collection of stories compiled by Roger Lambert and James Cote, is available now.

STRONG – In the spring of 1980, the first year of the modern Maine moose hunt lottery, Roger Lambert’s father, Elbert Lambert, received a permit. The Lamberts borrowed a pickup truck and assembled their gear: a 12-foot aluminum boat and outboard motor, a chainsaw and an axe, lines and tarps.

“Remember there were no ‘what to take’ lists out there at this time,” Roger Lambert writes in one of the first stories that makes up The Great Maine Moose Hunt, a compilation of stories from hunters, guides and families that serves as a sort of love letter to the state’s iconic hunt. “This was the first modern hunt and we were winging it.”

The Lamberts ended up dropping a moose on their third day and hauled 860 pounds of field-dressed moose out of the woods. A number of Strong residents stopped by Elbert Lambert’s house to examine the animal, which Roger Lambert estimated had antlers with a 46-inch span.

“The beginning of many decades of the ‘Lambert boys’ love affair with the ‘Great Maine Moose Hunt,'” Lambert wrote. Roger Lambert, left, and Elbert Lambert with a bull from the first hunt of the modern era. (Photo from The Great Maine Moose Hunt)

Lambert, a Master Maine Guide and owner of the Maine Guide Service decided to compile a collection of moose hunt-related stories after receiving a positive response to the moose-related seminars he gives at sporting shows and other events. Lambert worked with James Cote, a hunter and sportsmen advocate, to compile a collection of stories and photographs from moose hunts conducted across the state.

The moose hunt is a different sort of “throwback” phenomenon, Lambert said. Hunters, their friends and relatives, oftentimes representing multiple generations of outdoor enthusiasts, pack supplies and head off into the woods, he said, seeking to bring back hundreds of pounds of “high-protein, low-fat, chem-free” meat. The logistics of hunting, dressing and then transporting the moose require the right knowledge and equipment, Lambert said. At the same time, he noted, hunting moose in Maine is far less expensive and therefore accessible than a similar experience in Alaska, which could cost $20,000.

“It is one of the most iconic hunts in the lower 48,” Lambert said. “Our idea was to just story tell.”

The book includes stories from other guides and hunters as well as entire families that take to the woods. The stories touch upon techniques and equipment and, of course, moose calls, but much of the book represents the simple, first-hand experiences collected over the decades by the hunt’s participants.

This year is the 40th anniversary of moose hunt, Lambert noted, with the lottery scheduled for this Saturday, June 14. Lambert said that interest in the hunt goes beyond his book: the Maine Department of Inland Fisheries & Wildlife is planning a series to help people plan moose hunts, covering some of the skills that aspiring hunters should acquire.

The Great Maine Moose Hunt is available at DDG Bookseller, Twice Sold Tales, Jack’s Trading Post, Edmunds’ Market, The White Elephant and is available through the book’s own website.

Welcome To A Kentucky Derby Day Like No Other

It’s time the government does something about Tanami Road