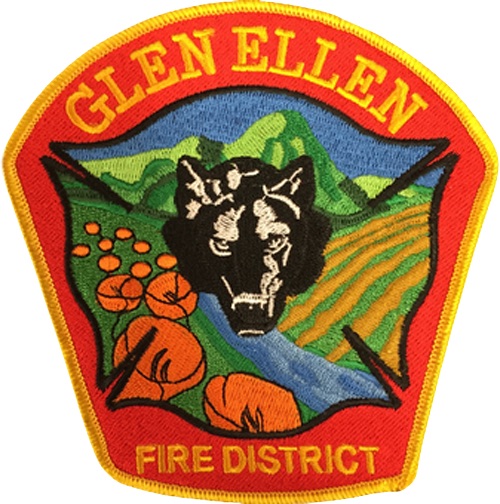 Editor’s Note: Much of the information below is from an article that appeared in the Kenwood Press in 2012.

The formation of the Glen Ellen Fire Department can be traced back to September 1923, the date of one of the worst fires in Sonoma Valley recorded history. As reported by the Sonoma Index-Tribune, the fire was started by a group of men in Napa County who were trying to smoke out bees. The fire got away from them, and spurred on by wind and dry brush, blazed through Nun’s Canyon, Trinity and Cavedale roads and spread rapidly through Glen Ellen to Boyes Hot Springs, obliterating the town of Boyes and several nearby resorts.

At that time, Glen Ellen had no fire department or fire engine, only buckets of water and neighbors. In the memoir Childhood Memories of Glen Ellen, edited by Bob Glotzbach, long-time Glen Ellen resident and former Glen Ellen Fire Department chief Bill Meglen (who passed away in 2004) remembered the fire of 1923: “It was the largest fire ever in Glen Ellen. I can remember the fire coming out of the building next door, and then our house and store caught fire. Pancrazi’s building was across [from] Carquinez. It blistered the paint, that’s all. He was lucky. If there was a lot of wind, it probably couldn’t have been saved. That was my first experience with fires, and that was one reason why we were instrumental in helping get a fire truck for Glen Ellen.”

As a result of that threat to life and property, the townspeople saw the need to form their own fire department. The first fire truck for the Glen Ellen Fire Department was a 1924 Ford Model-T, initially stored in a garage behind the Poppe store (next to the Chauvet Hotel). Meglen was acting secretary in 1932, the first Captain appointed, and the first training officer. The first Fire Chief was Julius Pancrazi.

“There were all kinds of fundraisers in the early days,” Meglen continued in Glotzbach’s book, “The Women’s Club here in Glen Ellen donated money for years. There were donation jars in stores around town. Bingo games were run at Mayflower Hall, dances held in the Chauvet Hotel on the third floor, and I remember O’Donnell donated a lot on O’Donnell Lane that was raffled off.” Meglen said the department paid around $4,000 for the second fire truck, a Dodge, bought in the 1930s, which was “a lot of money in those days.”

Not only was equipment less expensive in those days, the fire fighting system was also more low-tech than it is today. In Childhood Memories of Glen Ellen, Edward (Bud) Frideger recounted the process, “A fire would be reported to a telephone operator who activated a large siren on a 40 foot pole at the firehouse. Within minutes John Cambou or Ralph Horne and others raced to the firehouse. The first arrival was the driver; others jumped aboard or followed in their cars after the fire engine. The system was simple but efficient.”

Peter Van Fleet, who joined the department as a volunteer in 1985, also remembered some of the stories about the early days of the department and that in the 1930s Bill Meglen’s wife was an active participant on calls. “His wife was the only one in the community with a driver’s license,” said Van Fleet, “So she was designated to drive the fire truck.”

Van Fleet moved to Sonoma Valley in 1978, missing the valley’s second largest fire in September, 1964. According to accounts in Dee Sand’s book Kenwood Yesterday and Today, the fire began on Torrieri Ranch on Nelligan Road and burned north to Adobe Canyon and south to Agua Caliente, consuming 10,000 acres in three days. A Sonoma Index-Tribune article reported, “Mutual aid was never more finely displayed… There were 75 pieces of firefighting apparatus on the scene from as far north as Redding and south as Fresno.”

Starting in 1985, Van Fleet served at the department’s newly-built Station 3 on the corner of Arnold Dr. and Madrone Road. Up until 1985, the fire district had one station on Arnold Drive in Glen Ellen and a second location where they keep a Type 3 engine at Derickson Ranch near Enterprise Road. That station closed in the mid-90s. Van Fleet served as fire chief from 2008-2014, and most recently sat on the last Glen Ellen Fire Protection District board of directors.

Due to changing demographics and a decreasing number of volunteers, in 2017 the Glen Ellen Fire Department entered into a contract with the Valley of the Moon Fire Protection District to provide emergency fire and medical services. THE GEFD remained its own entity, but the move was reflective of an ongoing county-wide push to consolidate fire services. Since then, discussions were ongoing as to the creation of a valley-wide fire district. The GEFD opted to be part of a new district, and on July 1, GEFD district lines will officially dissolve and the Glen Ellen area will be part of a newly formed Sonoma Valley Fire District.