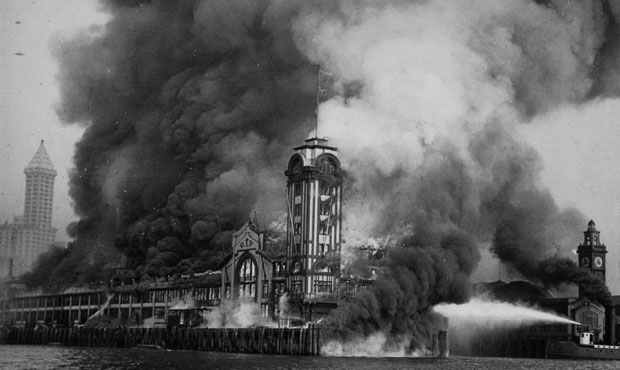 Smoke billowed from the pier, warehouse and distinctive tower at the foot of Marion Street on July 30, 1914. (Last Resort Fire Department)

From 1910 to 1930, there were at least five big fires on the Seattle waterfront that did hundreds of thousands of dollars of damage, which would translate into millions of dollars today. Oftentimes, they resulted in multiple fatalities and injuries involving both firefighters and civilians.

Before more modern construction techniques and safety measures, waterfront warehouses and other structures of a century ago were dangerous places that were often prone to catching fire. Timber construction and creosote-soaked pilings made for almost constant threat of combustion, not to mention steamers in Elliott Bay and locomotives along Railroad Avenue – now Alaskan Way – belching sparks and coal cinders, and nearly everyone in those years smoking cigarettes, cigars or pipes.

It was during one of the most iconic waterfront fires in the city’s history that the Seattle Fire Department lost a valuable piece of firefighting equipment in the murky waters of Elliott Bay. More than a century later, some say that priceless artifact might still be there.

The Grand Trunk Pacific Dock Fire of July 30, 1914 leveled a big pier and warehouse at the foot of Marion Street – where the Washington State Ferry dock is now – that served as a passenger and freight terminal for steamships of the Grand Trunk Pacific Railway. GTPR was a Canadian transportation company that later became part of the Canadian National Railway.

Page Olson has been studying local fire history for a long time. She’s board president of the Last Resort Fire Department, a non-profit group founded more than 50 years ago that preserves old fire engines and other artifacts of local firefighting history.  In non-pandemic times, the LRFD is a regular participant in community parades around Puget Sound.

Olson says that 106 years later, there are a couple of reasons why the Grand Trunk dock fire still stands out.

“There was loss of life … it was a tremendous fire,” Olson said. “And for fire department history itself, it was the very last fire where it was a ‘general alarm’ … and every company in the city [was] required to respond.”

The Seattle Fire Department’s general alarm policy was changed in 1920, because requiring every station to respond to a single event, even if that equipment and those firefighters were needed to fight a big fire, left other parts of the city vulnerable to small fires and other emergencies.

The Grand Trunk Pacific fire broke out late on a Thursday afternoon, and a cause was never definitively determined. It burned intensely for a few hours and produced massive clouds of smoke, drawing thousands of spectators who crowded near the fire on Railroad Avenue.

Another reason the Grand Trunk dock fire is so well remembered is because of what the dock looked like, and because of several indelible historic images of the fire in progress captured by talented photographers, now in the collections of several local institutions.

“There was a huge tower at the end [of the pier],” Olson said, with the tower measuring more than 100 feet tall. “And there was a lot of offices on the east end of the dock that abutted or was attached to Railroad Avenue. It was just this huge warehouse [with] people coming and going.”

The warehouse measured roughly 450 feet long and 100 feet wide, and photographs of the 1910 structure, particularly the tower at the west end, reveal architectural details unlike anything else from that era that still remains standing in Seattle. With its distinctive look, had the Grand Trunk Pacific tower survived the fire and other threats to old buildings, it’s safe to say it would be a treasured and iconic part of the Seattle waterfront.

Though there were fatalities and injuries – one Seattle firefighter was killed, and another badly injured and disabled, and four civilians died, too – on the brighter side, building codes for dock construction were changed a few months after the fire to require the use of more fireproof building materials including asbestos, and installation of more built-in hoses and other fire-fighting equipment.

And when it comes to firefighting equipment of the Seattle Fire Department in 1914, the SFD had a mixture of horse-drawn equipment and gas-powered trucks; both types responded to the Grand Trunk dock. Page Olson says the department bought their first gas-powered truck in 1910, and retired their last horse in 1924.

It was one of those gas-powered fire trucks from Station Five – the station right next door to the Grand Trunk dock – that might still be out in Elliott Bay more than a century after the fire.

According to Olson, the truck was driven far out on the pier inside the warehouse. As the fire burned out of control, the truck became surrounded by flames and the firefighters were forced to abandon it. At some point, the timbers weakened, and the truck fell through the wooden floor of the pier and into Elliott Bay. It may have been severely damaged by the fire prior to falling into the water.

Galen Thomaier, indefatigable founder of the Last Resort Fire Department, likes to think that the old fire truck – or, at least parts of it — might still be there, somewhere deep in the mud under what’s now the ferry terminal at Colman Dock.

“Although most of the metal parts are probably rusted away to nothing, the brass parts, such as the bell, headlights, grab-rails, etc., should most likely still be intact, but probably buried under a lot of dirt and silt,” Thomaier wrote in an email Tuesday.  “But boy, if I could ever retrieve one of those parts, that would for sure be a valuable museum piece for us to display.”

The lost fire truck is, technically speaking, not a fire engine, known instead as a “hose wagon.” In order to be considered a fire engine, a fire truck has to have an onboard water pump for dousing flames. A hose wagon was meant for carrying hoses, small ladders, other equipment, and firefighters from the firehouse to the fire, and then back again.

Waterous Engine Works in Minnesota built Seattle’s missing fire truck, and two others just like it – known as the “Model 15 Motor Driven Hose Wagon” – which the company sold to the Seattle Fire Department sometime in 1911. The trucks had four- or six-cylinder, crank-started engines, along spoked wheels with hard rubber tires. The rear compartment was meant for hauling gear, and the Waterous catalog described the Model 15 as a “practical, heavy duty hose wagon for metropolitan service.”

More than a hundred years later, Waterous is still in business. They no longer make firefighting vehicles, but they still make water pumps used in fire suppression.

Communications staff with Washington State Ferries and the Seattle Fire Department had not heard about the hose wagon missing after the Grand Trunk fire, which isn’t surprising given the more important day-to-day activities those agencies are focused on.

Scott Williams is an archaeologist with the Washington State Department of Transportation, as well as an expert on underwater archaeology and the Oregon Coast “Beeswax Ship.” He, too, had not heard of the 1911 hose wagon, but he knows a lot about Colman Dock.

“We did do a comprehensive underwater survey for Colman Dock – [with] two archaeological divers in the water doing a systematic survey to cover the area underwater,” Williams wrote in an email. “And no fire truck or anything even looking like a truck chassis was found.”

Fortunately, this wasn’t Williams’ final word on the missing fire truck, especially since the area around the ferry dock was capped with a layer of sand – to contain contaminated soil – back in the 1990s.

“But, that doesn’t mean the remains of the fire engine aren’t out there somewhere,” Williams noted. “[The remains] could have moved into deeper water, or just weren’t seen by the divers due to visibility conditions or other reasons.”

“I think it’s likely it isn’t there, but I couldn’t totally rule it out,” he added.

It’s tantalizing to think of Galen Thomaier, Page Olson, and the other members of the Last Resort Fire Department being proven right some day – and being rewarded with brass treasures to add to their collection of priceless Seattle fire history – if somehow, deep in the muck, the old 1911 fire truck is still out there, waiting to be discovered and brought home one last time.

Either way, perhaps we can all look forward to the movie version of “Raiders of the Lost Hose Wagon.”

You can hear Feliks every Wednesday and Friday morning on Seattle’s Morning News and read more from him here. If you have a story idea, please email Feliks here.