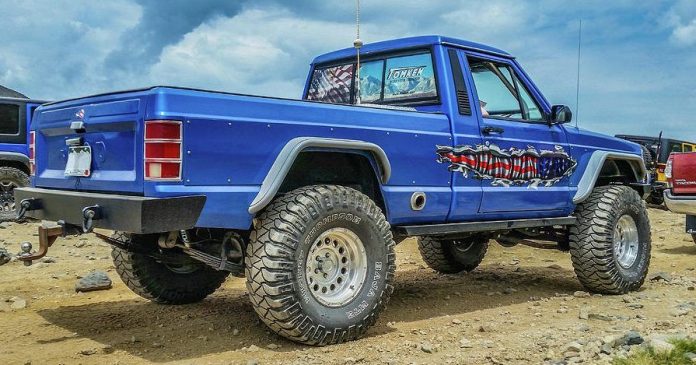 In the mid-1970’s more and more people became interested in pickup trucks as an alternative to the standard sedan. By the 1960’s Japanese car manufacturers, which had found their way into American markets, had introduced compact trucks with smaller engines than their American competitors. Soon, these compact imported trucks took over the truck market. To compete with companies like Toyota and Datsun, American manufacturers began designing their own compact pickups.

At the tail end of the small pickup era, AMC unveiled a compact pickup they named the Jeep Comanche, named after the Comanche tribe of Northwest Texas. The Comanche truck was based on the platform of the Cherokee, one of Jeep’s best-selling SUVs. Although it was only produced for six years, the Jeep Comanche has grown into a sought after collector truck.

Related: The 10 Coolest (And 5 Slowest) Jeeps Ever Made

The Real Story of The Jeep Comanche

In a lot of ways, the Comanche was simply a 1984 XJ Cherokee with a truck bed, the two cars shared the same drivetrain, unibody construction and, front-end styling. The truck could be outfitted with either a six or seven-foot bed, two or four-wheel drive, and three different engine options. With the exception of the V6, all of the engine options on the Comanche offered gas mileage that was way ahead of its time. The average Comanche owner could expect to get anywhere from 21 to 24 miles-per-gallon, which is as good as if not better than the many trucks that have come out in the last five years. But don’t let the Comanche’s small size and fuel efficiency fool you, this compact pickup truck could tow up to 5,000lb, the best towing capacity in its class. On top of all of this, the Comanche was the cheapest model of Jeep when it was released.

The End of The Jeep Comanche

Ultimately, the Jeep Comanche stepped on to the scene a little too late to capitalize on the best years of the compact pickup craze. Although it sold fairly well in the 1980’s, in the early 90’s Chrysler only sold a few thousand Comanche’s a year. On top of this, there were conflicts of interest with Dodge that forced the Comanche out. In 1987, Chrysler bought out AMC, making Jeep a subsidiary brand along with Dodge. In that same year, Dodge unveiled the Dakota, a compact pickup that would directly compete with the Comanche. In 1990, the National Council of Jeep-Eagle Dealers asked Chrysler to discontinue the Comanche so they could sell the more popular Dodge Dakota. In the end, Chrysler sided with the Council and discontinued the Comanche. But because of their reliability and their limited run, the Comanche is worth much more now that it was in the 1980’s.

Related: 15 Pickup Trucks From The 90s That’ll Increase In Value In 10 Years

The Comanche’s Successor: The Jeep Gladiator

Although Jeep has no plans to resurrect the Comanche, they have reentered the pickup truck market with the 2020 Jeep Gladiator. But the Gladiator is a completely different truck than the Comanche. Instead of a compact, affordable, work-focused truck, the Gladiator is a lifestyle truck, with a luxurious cabin and a price tag to match. The Gladiator’s only body option is a crew cab with a five-foot bed, but this small bed comes with accessories like in-bed lights and a power outlet. Although the Gladiator has less cargo space, its engine is more powerful and has a towing capacity of 7650lb. The one thing these two trucks do share in common is off-road capability. In an off-road test of a 1988 Comanche and a 2020 Gladiator, the two were evenly matched. Only time will tell if the Gladiator will live up to the Comanche’s legacy.

Next: Why The Jeep Gladiator Will Be A Gigantic Failure

Chuck is orignally from Long Island and grew up going to classic and antique car shows. He graduated from the College of William & Mary in Virginia and has since moved to Brooklyn to pursue a career in Environmental Science. Although he loves classic muscle cars, Chuck is always looking out for exciting new releases. In his free time, Chuck enjoys kayaking, drawing and fishing.

Trends of Truck Telematics Market Reviewed for 2020 with Industry Outlook...