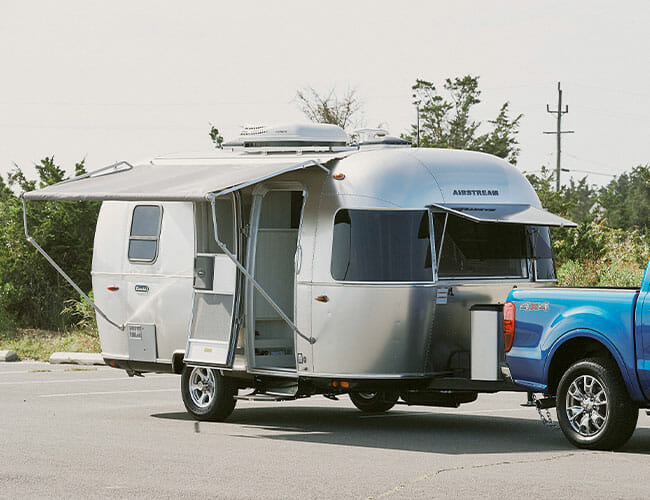 Airstream didn’t have a booth at this year’s CES 2020 convention in Las Vegas, but CEO Bob Wheeler thinks his presence on the show’s floor is extremely worthwhile. For a brand that melds the automotive and residential realms, emerging technologies from both industries showcased at the event help inform the legendary camping giant as to what’s available, what’s desired, and what’s possible.

“Smart home tech bleeds seamlessly into what we do,” Wheeler tells Gear Patrol, noting that while the brand’s illustrious heritage may be built on unchanging exterior design, its customers want the same convenience of connectivity and technology they enjoy in their homes.

“We want to be just ahead of the curve. We don’t want people to pay for something they don’t want to use,” he says.

Wheeler adds that the Airstream Smart Control app has been a gamechanger for clients. While not new, the Smart Control app dovetails with Airstream’s Multiplex control system to give your smartphone power over things like climate, lighting, awning extension, and tank and resource levels.

“What’s new will be the ability to link this system to the cloud, so you can understand, control and monitor your Airstream from anywhere,” Wheeler says.

Airstream is already starting to write AI systems that will use your data to help send warnings and tips to owners. “Say you’re on a hike and there’s a storm system approaching your area. We could send you an alert that it’s coming and offer to retract your awning. Or if the temperature is rapidly dropping, we can offer to turn on the heater to warm up the water in your tanks so it doesn’t freeze,” he says.

The AI could even understand your water and other resource levels (like propane or electricity) and calculate when you’ll need to top off — and how much you’ll need — before you head into the wilderness. Given that most of his customers are now trying to get further off the grid on Bureau of Land Management or National Forest Service land far from assisted campgrounds, this added level of help should be monumental.

Everything in development at Airstream is aimed at easing pain points for customers, whether they’re new to trailering or veterans of the wilderness. “We’ve found that Airstreamers love to stay near other Airstreamers, so adding a community component to the app, with a Waze-style interface, can help owners plan and navigate trips, and the roadside systems, making it more convenient,” says Wheeler.

To maximize efficiencies — and the Airstream experience — the brand will require some added buy-in from external partners. “We can’t get a refrigerator to tie into the Multiplex system yet,” he says, “which may not seem like a big deal if you’re in a house. But when your fridge is running off limited resources, your temperature can vary drastically and your food could spoil. We’d love to help prevent that by monitoring it.” He adds that the company is constantly talking to appliance makers at places like CES.

Wheeler is also keen to keep relationships strong with vehicle manufacturers. The dream would be to ingrate the Smart Control app into a vehicle’s infotainment system, making everything behind you controllable from inside your the truck or SUV towing the rig. Also on the docket for a collaboration with a manufacturer: camera systems that can be displayed inside your tow unit.

“We can put cameras on the outside of a trailer, but people blow tires all the time and don’t know it and keep driving, damaging the rim. If you could view those cameras from your car, you’d know instantly,” he says.

While Airstream’s strongest relationship is with General Motors, it is deeply interested in the electric vehicle space, paying particular attention to what upstarts like adventure-minded Rivian are bringing to market.

“EV sales are rising, though it’ll be a long time before the market saturates,” Wheeler says. “We know our customers are more likely to own an EV, even if they’re not currently using it to tow an Airstream, so how can we offer them something that can be towed by an EV without loss of range or significant battery drain?”

In the bid for range neutrality (i.e. not causing a car’s battery to drain faster than it would without a trailer), making Airstreams light is the obvious first step, but Wheeler also says adding a battery cell in the chassis of the trailer could supplement the towing EV. “Those cells can work in concert, maintaining the range, perhaps even enhancing it when the tow vehicle’s battery gets low.”

This requires OEM participation, though, so a third option is being mulled: adding a battery cell and a drivetrain directly into the trailer. Airstream’s parent company, Thor Industries, recently acquired Hymer, Europe’s largest manufacturer of RV trailers –which is significant because Hymer was responsible for eCoco, a functional concept of this very model.

“It’s got an axle drivetrain system with regenerative braking and control software that so that it’s self-propelled,” Wheeler says. “The trailer can never push the tow vehicle, but it can sense being pulled and accelerate to match the speed.”

Another advantage of a self-driving trailer? Get to a tight campsite, detach the trailer, and control it from your phone to maneuver it into the parking space under its own power. Plus, established campsites have power poles that could double as charging stations, giving you medium-to-fast charging at a number of places.

Fuel tanker crushed by plane in horror accident at an airport...