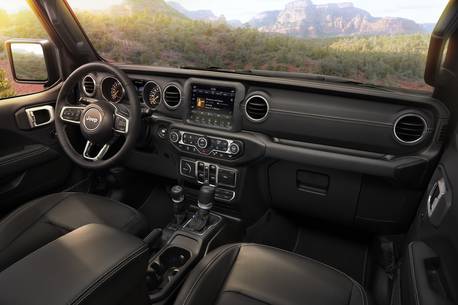 Both on and beneath the surface, the Toyota 4Runner TRD PRO and Jeep Wrangler Unlimited are very similar.

Representing two of the most recognizable enthusiast 4x4s on the planet, both flaunt truck-based frames, rough-terrain prowess, and spec sheets that read like an off-roader’s Christmas wish list.

But similar as they are, they also sport many differences. The Wrangler’s V6 powertrain is unquestionably more refined and responsive in everyday driving. It’s got a more modern feature list; go for the optional LED headlamps, and you’ve got forward illumination on par with a big-dollar luxury SUV.

The 4Runner TRD Pro’s trick suspension blows the Wrangler’s ride out of the water on rough roads, potholes, moguls and the like. The rougher the terrain, the bigger the difference. The TRD Pro suspension is some serious hardware magic. It’s also got something many a 4Runner owner loves: a time-proven driveline that’s remained largely untouched for a decade or so, to the presumed benefit of reliability and no-nonsense operation.

Finally, some 3,200 collective kilometres behind the wheel of this pair has this writer figuring the interior is the most meaningful area where they differ. Like its engine, the 4Runner TRD Pro’s cabin is a step back in time to 2010, when this generation was introduced. Little on board has changed since. The Wrangler, on the other hand, benefits from the full deployment of FCA’s interior design firepower. In fact, the Jeep Gladiator’s interior — the Wrangler is basically identical — was named one of Ward’s 10 Best Interiors for 2019.

On first opening the 4Runner’s door and looking through the front passenger area, the overwhelming element in your field of view is plastic in various shades and textures, some of it covered with stitched leather for a bit of flair. Door handles are chrome. Shapes are big and chunky. The glossy centre stack and steering wheel trimmings dial up the fancy a little, too.

In the 4Runner, there’s a panel to the left of the steering wheel full of switches for the mirror and lights and cluster dimmer dial — and it looks like it came straight out of, well, a 2010 4Runner. It’s one of the first things you see when you open the door. All said, the cabin looks easy to get comfortable with and flaunts a few upscale touches, too. It’s tidy and simple to use and means you no harm.

But the real punch in the face, visually, comes from the Wrangler. Open the door on a comparable unit, and the look is instantly richer and has more depth. The stitching is more prominent. There’s robust use of metallic-colored trim that pops against the black leather and plastic applied throughout. Metal rings on the dash match the door pulls, and even the seat adjustment controls have a thick and chunky shape that nicely match the cabin’s character. From a glance, Wrangler gives you an enticing invitation to look deeper, to inspect and to check things out. The Toyota looks inviting; the Jeep, more intriguing.

From the driver’s seat

And from that all-important seating position where you’ll spend every moment actually driving each machine? The 4Runner flaunts chunky and glove-friendly climate control dials front and centre, with stereo controls logically just above. The climate control system is a fuss-free affair with all controls presented clearly in the form of large, well-labelled buttons. There’s an LCD readout that’s old-school cool and easy to read, even if it looks like it’s from 2004; the digital clock atop the dash looks even older. It’s charmingly old-school — or very dated, depending on where you’re standing.

This same center stack area in the Jeep is used to flaunt some attention to detail and premium finishes. Small screws are used to hold the aluminum bezel in place, itself precisely cut to allow the chunky, metallic stereo controls to overlap slightly. Buttons embedded within dials and crisp LED lighting on certain controls help round out the package, though there’s no LCD screen for the climate control and the buttons are smaller and less glove-friendly to operate. Just below are the confusingly placed window switches — you’ll get used to it — and some media and power connections, as well as auxiliary electrics for your accessories and small-item storage.

You’ll probably find the 4Runner’s controls more intuitive, and its climate control system easier to reference. The Wrangler’s common forward controls are a close second by my estimation, while far fancier in appearance.

But cast your gaze to the gear levers, and you’ll notice they’re light-years apart. The 4Runner’s gated automatic shifter hammers back and forth through its jagged track as you pull it down into gear. It feels fairly low-budget and fairly noisy if you shift from Park to Drive too quickly; the 4×4 shift lever is a simple stub with a simple black vinyl knob and vinyl shift boot. Nothing to see down here. In the Jeep, you get a stitched shift boot for both shifters, a red release trigger for the transmission lever, a contrast-coloured graphic on top of each shift knob, and a finely finished metal trim collar just beneath. By the way, Wrangler’s shifter is far smoother and quieter in use.

Getting behind the wheel

In the 4Runner, said steering wheel uses glossy accents and sporty thumb detents in conjunction with controls and track-pads for on-screen functions embedded within. The instrument cluster is a traditional analog gauge set that sees speedometer and tachometer easy to read and encircled with a cool-looking metallic gear accent. Between them, the display screen can be customized to show a variety of menus and displays, though the graphics are fairly dated by modern standards.

It’s worth noting here that the 4Runner’s cabin, being less punched-up with metallic accenting and glowing backlighting than that of the Wrangler or Gladiator, provides drivers a much more focused forward view. Put another way, there’s less to distract you by way of visual elements all over the dashboard, making the 4Runner ideal for, say, taking in the scenery.

In the Jeep, the metal accenting and stitching is more prominently visible in the driver’s peripherals, which helps create an upscale atmosphere. The steering wheel uses richer leather, more stitching, more depth, and more metal towards a more substantial look and feel. By moving some controls to the back of the steering wheel, the forward face is more cohesive looking, with less buttons, better integrated within their surroundings.

The Wrangler’s instrument cluster is busier and less straightforward than the Toyota’s, though lovely to look at. There’s more metal, the in-screen display is more crisp, responsive, and animated, and stitched leather surrounds it on both sides. There are little styling touches designed to be nearly hidden, that you’ll encounter on occasion, presumably with a little smile.

A similarly cool touch on the 4Runner is the ceiling-mounted control dials used to control some of its advanced off-road systems. Putting them overhead adds a bit of novelty to their use and helps preserve a clear and uncluttered forward dash for the driver.

Simple and straightforward, or flashy and fancy? That’s up to you. I’d recommend even die-hard brand-snobs check out both machines if they’re considering just one of them. The Wrangler’s interior is one of its biggest assets. The 4Runner TRD Pro? It’s the off-road ride quality.

Impact of Covid-19 on Truck & Bus Rearview Mirror Market is...

As Black Lives Matter protests grow, Indian students in the US...