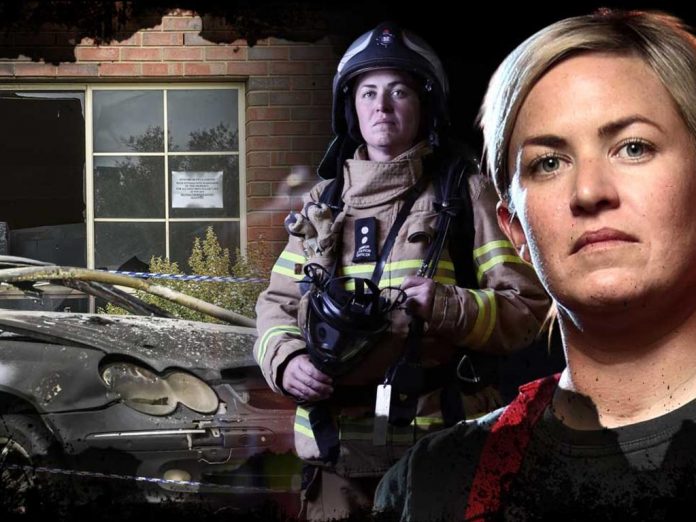 Firefighters are there to protect us but on one fateful night in Victoria it was them who needed protection when an axe-wielding ice addict began rampaging through the streets with a jerry can full of petrol and a box of matches.

Rachel Cowling could have easily been a nurse just like her mother.

But days spent with her firefighter dad at his station as a child convinced her to follow in his footsteps instead. She is a fifth generation firefighter.

“I have a long, proud family history of firefighting in Melbourne,” she tells The Night Watch.

“And that’s how I got interested in the job ever since I was little – seeing dad come from work. I loved asking him questions about his role and what he did and how he served the community.

“The more I found out about firefighting, the more I fell in love with it. And I realised it was a possibility for young girls to pursue a career as a firefighter.

“And I knew that’s just something I had to do …and I’ve been doing it for the past 14 years.”

She said working the night shift often served up its fair share of interesting jobs – from the expected car and house fires to the not-so expected drunken calls about birds up trees.

LISTEN: Victorian Firefighter Rachel Cowling told The Night Watch she knew something was seriously wrong when she arrived at a fire and saw her colleagues running towards her while being chased by an axe wielding ice addict.

While stationed at Broadmeadows station in 2015, Cowling and her crew were called out to reports of a car fire at 10.30pm at nearby Meadow Heights.

The crew jumped into action, responding to what they thought was “a simple car fire”.

But this car fire would be anything but simple. In fact, it would be one that still affects Cowling almost five years later. By the time Cowling’s truck responded there were already two other trucks there, so the Broadmeadows crew started heading back to base.

“As we’re making our way back home, I heard the triple-0 operators get on and say that there was conflicting information coming through because there were other people calling triple-0 stating that there was now a house fire.

“And then the triple-0 operators weren’t sure if it was getting mixed up with the car fire or if it was house fire. So I waited to listen for more information.”

As Cowling and her crew sat in their truck on the side of the road another call came over the radio.

This time reports of a man wielding an axe and a jerry can full of petrol.

They made their way back to the scene – on a silent approach with “no sirens” – before parking behind another fire truck.

“The first thing I remember seeing is the firefighters running towards me and my fire truck and the man wielding an axe and holding a jerry can chasing them,” she said.

“I really had to take a deep breath and think about what I should do.”

As those firefighters literally ran for their lives – the man turned his focus on one of the fire trucks parked in the street.

“I remember watching this and it felt like slow motion … he just started pouring it (the jerry can) over the fire truck and he lit the match.

“So I guess just making sure that we knew where he was at all times so he couldn’t hurt us was our primary objective.”

The man in question was Charlie Tannous – who was in the midst of a drug-fuelled arson rampage after trying to make contact with an ex-girlfriend in the area.

In an act of desperation, firefighters turned their hoses on Tannous before he swung his axe and hit the foot of one firey – the axe striking his steel-capped boots.

Tannous fled before he was eventually caught by police.

Cowling said the attack had a lasting impact on her and her crew.

“This is something we didn’t deserve on that night and it does have an impact it – takes a long time to recover from something like this.”

Tannous was later sentenced to four years in jail over the incident. His original sentence was slashed by almost half after Victoria’s highest court found his mental state had not been taken properly into account.

Cowling said she was proud of the way she and her crew handled the situation that day – something that helped remind her of why she wanted to become a firefighter in the first place.