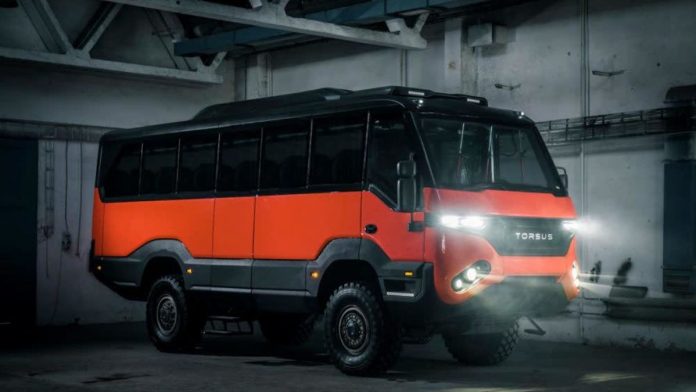 It’s an eternal twilight. Unidentified creatures howl in the distance while little fires burn out of the ground here and there for some reason. If you want to get to the North Lands once called Toronto where legends of flowing water and a life beyond the wastes beckon, you’re going to need to load the whole clan into the Torsus Praetorian and ship out.

But before things get that bad, you just may need a Praetorian anyway. A bus designed to take on the roughest terrain around is actually more useful than you might think and Torsus thinks their vehicle has plenty of applications.

Czech Republic-based Torsus’s bus is designed first and foremost for mines and oil fields where crews of workers need to cross rough terrain with regularity. While Land Cruisers work just fine for a few workers, big jobs require big crews and that’s where the Praetorian is supposed to find its niche. The Praetorian is a fully integrated vehicle with climate control, advanced suspension, and a finished interior, all important upgrades when it comes to off-road worker transport.

There have been crew buses of numerous types in the past that have been designed with an emphasis on off-road capability and value but lack somewhat when it comes to passenger accommodation. These vehicles, basically just trucks with seats in the rear box instead of room for cargo, are popular in parts of the world where roads aren’t always maintained but workers need to be moved regardless.

Take the Vakhtovka, or shift bus, which industrial workers in the Soviet Union and its successor states know all too well. These buses were basically 6×6 Soviet Army trucks like the ZIL-131 with a small passenger cabin fitted on the back with no connection to the driver’s cab. You still see them in post-Soviet states, some still on old ZIL or Ural running gear, some built on more modern Russian trucks.

Another example is the Tiyulit, or trip bus, that I know well myself. These Israeli truck-buses are usually based on 4×2 or 4×4 European cab-over trucks with a basic, usually un-airconditioned passenger compartment mounted on the back. Like their Russian cousins, Tiyuliyot, as they’re known in the plural, are used to carry workers to remote industrial sites like phosphate mines in the desert and also soldiers between bases and exercises, though real buses are starting to push them out of service even in those roles. They’re also used for off-road tourism so if you want to ride one, you probably can just schedule a desert tour and you’ll get a chance to have the real rough-and-tumble Israeli desert experience.

Both of these types of off-road buses are capable, but they’re notoriously uncomfortable. Israelis love to call them nightmare buses, which rhymes a lot better with Tiyulit in Hebrew. Torsus recognized that there was a need for a bus that could do what these vehicles can off-road (and maybe more) but that could carry its passengers in real comfort. And that’s where the Praetorian comes from.

First debuted in 2018, the Torsus Praetorian is built largely on running-gear from German truckmaker MAN. The motor is an inline six-cylinder diesel that makes 240 horsepower and a massive 682 lb-Ft of torque and it sends its power to locking front and rear axles through a twelve-speed MAN/ZF semi-automatic transmission. All of that is basically what you could get if you built a regular truck-bus on the back of a MAN TGM 4×4 truck, but Torsus is betting that offering an integral design and custom cabin options will make their Praetorian a real contender.

On that front, Torsus is offering more than twenty configurations of the Praetorian, from a basic mining crew bus to a fire fighting vehicle to a bespoke luxury RV, kind of like that 6×6 MAN truck I saw last fall in New York. They’ll even chop off the back of the bus and turn it into a part-bus, part-truck Frankenstein’s monster. It seems like all these proposed applications are attempts to find the vehicle more markets than the established industrial uses for a vehicle like this. I hope some of them work out because the concept art is pretty rad.

So far, Torsus has built a few prototypes but it doesn’t seem like the Praetorian has reached any customers as of yet. The bus’s design did win the well-known Red Dot Design Award this year, which ought to drum up a little more enthusiasm for the product. If we’re lucky, enough of these will be built and find their way to customers before civilization fractures any more. If I’m going to witness the end of the nation-state paradigm and the rise of road wars, I’m going need a Torsus to drive around. Duh.