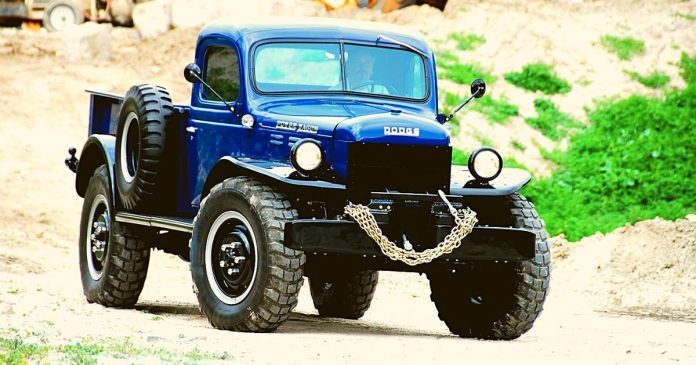 Derived mechanically from Dodge’s WC series military trucks, here are some more details and the truth behind this Classic Power Wagon.

The Dodge Power Wagon is a four wheel drive medium-duty truck that was produced from 1945-1980 by Dodge, the American brand of automobile based in Auburn Hills, Michigan.

The Power Wagon served as a nameplate for the Dodge Ram, the full-size pickup, from 2005 to 2013. It was initially developed as a WDX truck, and until around 1960, it was known by its engineering code T137 – a nickname that is still used to address the Power Wagon by car enthusiasts.

The Power Wagon continued the already-started production of Dodge 4WD trucks that arose in the 1930s. Derived mechanically from Dodge’s 42-45 WC series military trucks, which were light 4WD and 6WD utility vehicles, the Power Wagon was introduced in 1946 as the first civilian 4×4 truck.

The Power Wagon was sold through the 1980 model year, with a number of styling changes in terms of size and weight, but keeping the basic package generally the same throughout its life.

RELATED: Ram Power Wagon Mojave Sand Limited Edition Is Made To Be Rugged

From 1943 onwards, Dodge began building four-wheeled drive trucks for the Army. These ranged from half-ton to full-ton, coming in a variety of sizes, styles, and colors. After the war ended, former soldiers began looking for Dodge trucks to use in their daily life due to their ruggedness, durability, and excellent build quality.

The company then became overloaded with requests for these wartime machines, used as carry-all vehicles for the necessary supplies for the army. After all, Dodge had built 226,776 of them, so there were plenty to go around. People wanted the trucks’ durability, four-wheel drive capabilities, and ample capacity.

Dodge then worked to somehow transform their military trucks into more civilian-friendly vehicles, while still keeping the existing parts. Dodge told the automotive press that this new vehicle was going to be known as the “Farm Utility Truck”, which then changed to the “WDX General Purpose Truck” in early 1946.

The Power Wagon nameplate was dropped in 1981 when the Dodge Ram stepped onto the scene. The 4WD vehicles were now being sold as “Power Ram” from 1981-1993. The Dodge Ram is a full-size pickup that is currently in the fifth generation package.

For 2005, Dodge decided to use the Power Wagon name again on a specific version of the Dodge Ram 2500, a certain off-road version with a 5.6-liter Hemi V8 engine. As of 2014, the only engine option available to purchase is the 6.4-liter Hemi.

RELATED: Ford Raptor Versus The Ram Power Wagon – Which Truck Is Your Off-Road Pick?

The special features of the Power Wagon include electronically controlled locking differentials, which are designed to “lock” both wheels on an axle together to force both wheels to turn in unison. It also includes 17-inch diameter Alcoa forged wheels, Bilstein Monotube Gas-Charged Shocks, extensive skid plating, strengthened steering gear, and a re-mapped low range 4×4 throttle.

The Power Wagon was the first mass-produced 4×4 medium-duty truck and represents a key predecessor to the modern four-wheel-drive trucks consistently in use today. Updated variants continued in production until 1964, showing the impact this model had on the automotive world.

The 2020 Ram Power Wagon has even been spotted during its testing stages – and it looks powerful. We can expect this year’s model to have the same engine as before, which is the 6.4-liter Hemi V8 that can produce 410 horsepower. Similarly, the 6-speed automatic transmission will be the same as before.

The interior should also follow suit with the Ram 1500, meaning that the 8.4-inch LCD will continue on for the 2020 model year as well.

As for the exterior, we can expect that much of the styling will also come from the Ram 1500, with similar head and tail lights along with some unique grille characteristics. Despite these similarities, the side mirrors and roofline have been updated, along with the thicker wheel fenders.

Further, this power wagon could impact creations in the future. There have been sketches and ideas of Electric Ram Truck based off of the classic Power Wagon.

With this futuristic design and off roading capabilities, certain features are borrowed from current production models, like the RamBox compartments and the compact steps for cabin access.

NEXT: This Is A Jet-Powered Amish Wagon. No, Really

What are the different classes of RVs explained: Class A, B,...