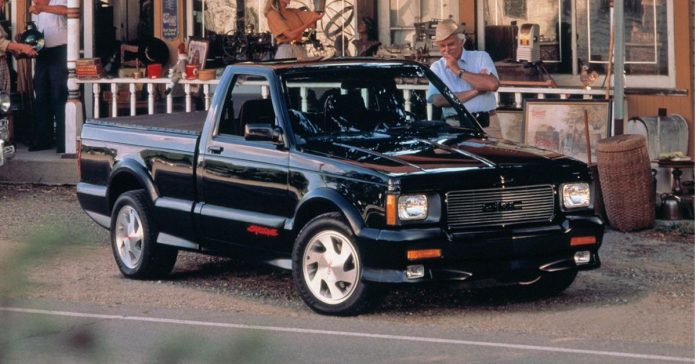 The GMC Syclone is a high-performance version of the GMC Sonoma pickup, a compact pickup truck that was the first domestically produced compact of the big three American automakers. First produced in 1991, the Syclone inspired the similar GMC Typhoon SUV, produced during the 1992-93 model years.

At the time of inception and marketing to the world, the Syclone was the fastest and quickest stock pickup truck produced worldwide. Various magazines recognized its prowess and power, and compared it to the likes of high-powered sports cars, like Corvette and Ferrari.

Both the Syclone and Typhoon trucks feature a Mitsubishi turbocharger and Garrett intercooler, a device used to cool gas after compression, reducing the density and raising its temperature. They also featured a high powered 4.3-liter LB4 V6 engine, an engine within the Chevrolet 90 degree V6 family. If you are interested, check out this GMC Syclone that gives the Canyon 450 horsepower. Specialty Vehicle Engineering is a company from Tom’s River, New Jersey, that is all about reviving cars – and the Syclone is no exception.

All Syclones had a 4L60 4-speed automatic transmission, with the 4L60 being a turbo-hydramatic transmission produced by General Motors, combining a three-element turbine torque converter with a planetary geartrain.

A BorgWarner all wheel drive transfer case was used, giving 35% forward and 65% to the rear wheels, with the BorgWarner being a reputable and well-known producer of industrial components and parts, especially known for its powertrain products and transmission components.

Both the Syclone and the Typhoon contained sport modifications and additions to the standard suspensions. The Syclone was the first truck to receive a 4-wheel anti-lock braking system, producing 280 horsepower and 350 pounds per foot of torque, showing its power and strength.

Further, this truck could really accelerate quickly. It could go from 0 to 60 miles per hour in just 4.3 seconds and could reach a quarter-mile in only 13.4 seconds.

RELATED: Here’s Why You Should Buy The GMC Sierra 2500 HD Instead of a Ford F-Series

Despite the Syclone having great performance specs, especially for a pickup truck that was burly and slow-looking, it was actually not the best option for what it was intended for – a pickup vehicle. Even though it had good acceleration and power, it was a poor choice for a heavy-duty pickup truck compared to other choices on the market.

Its payload was only 500 pounds, and it only had 2,000 pounds of towing power! This is pretty poor compared to some other options that can pull twice that amount.

RELATED: 10 Times GM Made A Bad Pickup (And 5 Times They Rocked It)

Additionally, GMC even made a statement to the public, warning those that this version of the truck couldn’t go off-roading as other models could. The S-10 or the GMC Sonoma pickup can go off-road no problem; the Syclone, however, cannot.

That seems to be counterproductive to what a pickup truck should actually be able to do. With a lack of towing power and lacking the abilities to go off-road with ease and give the owners confidence, this pickup is not a do-it-all kind of truck.

However, some argue that this isn’t the reason you would buy this truck. If you want a burly and heavy-duty truck that can frequently go off-roading, pulling campers, or driving down trails, then this isn’t it. However, if you are looking for a fast and quick pick up, then this could be the model for you.

In a head-to-head race between a Ferrari and a Syclone, who will win? Let’s see. Car and Driver put it to the test.

You need a skilled driver to be able to shift through Ferrari’s manual transmission with ease, but the car will still be able to accelerate extremely quickly with the right driver.

With that pickup, the shifting and the acceleration are virtually soundless compared to the sportscar. However, the shifting is tricky too, since the limiter will completely shut off at 4700 rpm on the dot, just 500 rpm below the threatening red line.

In third gear, the Ferrari begins to shine. It starts to pull away from the truck, but the pickup holds on tight. Shockingly, the pickup wins.

A Syclone will apparently beat a brand-new $122,000 Ferrari 348ts. The truck’s turbo, torque converter and adhesive-tape traction are deadly going form 0 to 60 miles per hour, showing its proficiency with acceleration. The only time that a Ferrari, or another sports car, could edge out a truck is at a longer distance. Once the truck goes above 80 miles per hour, the weight starts to slow it down.

Even still, the ability of a Syclone to come in at 14.1 seconds for a quarter-mile, while the Ferrari comes in .4 seconds slower, is extremely impressive – for a pickup truck that has virtually no “pickup truck” abilities.

NEXT: GMC Considering Electric Pickup Despite Previous Claims to the Contrary