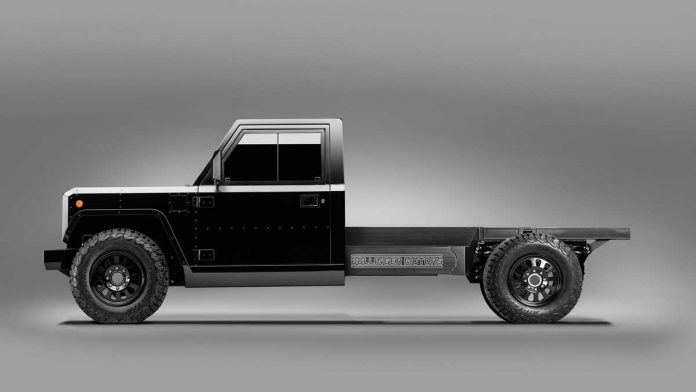 Electric utes are coming, with both the Tesla Cybertruck and the Rivian R1T now expected in 2021, and they will be joined by another contender looking to make an all-electric, hardworking utility truck a solid option for tradies and workers across a wide range of industries.

The new contender, revealed by Michigan-based Bollinger Motors on Thursday (US time), throws another spanner in the works for those that think electric vehicles cannot and will not present a realistic zero emissions alternative to petrol and diesel-fuelled work trucks (known as utes in Australia and pickups in the US).

Remember this? “We are going to stand by our tradies and we are going to save their utes,” was the misplaced cry of small business minister Michaela Cash when an electric vehicle target was proposed by Labor’s then leader Bill Shorten in 2019.

Bollinger’s answer to the doubters is the B2 Chassis Cab (B2CC), a utilitarian piece of Class 3 engineering with the ability to carry a 2.3 metric tonne payload as well as provide an ample energy source for tools from its 120kWh battery pack.

This looks to be one serious piece of kit: with a low centre of gravity, hydro-pneumatic self-leveling suspension (independent both front and rear), all-terrain capabilities, CEO Robert Bollinger says it is aimed not just at your work-a-day tradesperson but also at workers needing a platform for specialised equipment.

“Commercial fleets will be able to reduce their overall cost of operation while buying a truck designed, engineered, and built in the USA,” said Bollinger in a statement.

Think tow trucks, small construction equipment, cherry pickers, custom traybacks – built on the same e-chassis that underpins Bollinger Motors’ Bollinger B1 Sport Utility Truck and the B2 Pickup, it will be available with either a two-door or four-door cab either enclosed or cutaway, and a variety of wheelbase lengths, says the company.

It also offers a long item storage design feature that allows a pass-through to the front of the vehicle – perfect for items you’d rather not tie to roof racks (if indeed you have some installed).

It is available at first in the US, but given fellow Michigan EV startup Rivian has previously said it has Australia in its roadmap for release, and Australia is the single largest market for the Tesla Cybertruck outside of North America, its not unfeasible that Bollinger may eventually turn its eye to the Antipodes also.

However it would likely be for a price. Bollinger Motors has not as yet released a price for the B2CC but going on the B1 and B2 pricing it will come in a little under $US125,000 – in today’s money that is $A193,000 converted.

A full list of features as released by Bollinger Motors is as follows:

Bridie Schmidt is lead reporter for The Driven, sister site of Renew Economy. She specialises in writing about new technology, and has a keen interest in the role that zero emissions transport has to play in sustainability.