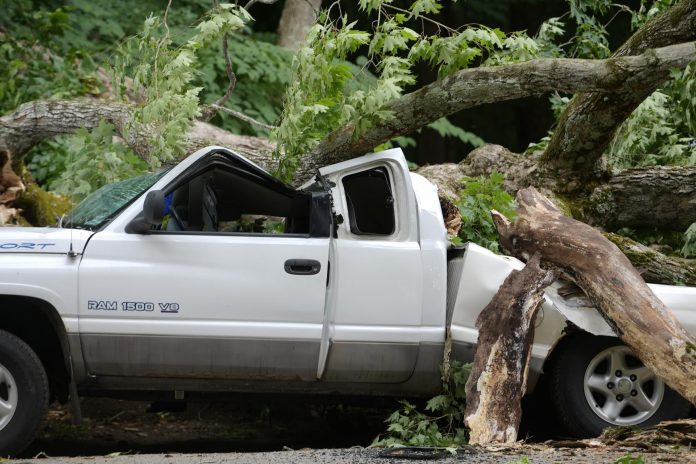 WORCESTER – As Tropical Storm Isaias made its way up the coast Tuesday, Central Mass. received a dose of wind and rain and even waited out a few tornado warnings.

Early preparations were made for the storm, which briefly achieved hurricane status Monday night before again being downgraded to a tropical storm by the time it reached the area.

As the afternoon wore on Tuesday, scattered reports started coming in of trees down throughout the area, including Leicester, Spencer and Auburn. Auburn police cautioned that a large tree that came down near 238 Millbury St. blocked the road and advised motorists to avoid the area for several hours.

After about 4 p.m., rain and wind alternated with spots of sunshine as the fast-moving storm blew through.  As of 4:45 p.m., nearly 8,000 customers in Worcester County were without power, according to National Grid. The bulk of those outages were in Millbury, Northbridge, Sutton, and Uxbridge. Meteorologists expected stormy weather to continue throughout the evening.

At 12:45 p.m. Tuesday, the National Weather Service issued a tornado watch for all of Massachusetts and parts of surrounding states. Earlier a tornado watch was issued for the Berkshires.

At about 2:15 p.m., a tornado warning was issued for northern Central Massachusetts. Although there were observations of cloud rotation in the Ashburnham/Fitchburg area, no tornado touched down.

As the storm came in, it brought with it increasing winds that downed trees in some areas, including Leicester, where a pickup truck and another vehicle were hit on Mulberry Street.

In anticipation of the storm, Worcester closed its pools and spray parks and urged restaurants to take down their outdoor dining areas to avoid damage from the winds that could gust to 50-plus mph.

Residents were also reminded to secure anything that can blow around in high winds.

Walter Bird, a spokesman for the Worcester city manager’s office, said with changing conditions predicted for the storm, the city did not anticipate opening its emergency operations center or shelters.

The storm arrived in Central Massachusetts Tuesday afternoon at about 2 p.m. as clouds darkened and winds picked up. It was expected to bring sustained winds of 25 to 35 mph, with 50 mph gusts and a slight possibility of gusts up to 60 mph, according to the National Weather Service.

Torry Gaucher, a meteorologist for the National Weather Service office in Norton, said the rainfall in Central Massachusetts is expected to be around 1 inch.

The storm track shifted to the west from initial projections. As tropical storms tend to rotate counterclockwise, the heaviest rain is expected to be in Western Massachusetts. The lower amount of rainfall is due to the speed of the storm, which was passing through Delaware at about 9 a.m. with a forward speed of 33 mph, up from 16 mph Monday. The main part of the storm is expected to arrive in Central Massachusetts between 3 and 8 p.m.

“It should be passing through fairly quickly, in and out by midnight,” Gaucher said. “The bulk of the storm is expected in the afternoon.”

Gaucher said there are already storms blowing up ahead of the tropical storm, including a storm in the Berkshires that had a possibility of a tornado. That tornado warning was later canceled, but the weather service later issued the statewide tornado watch.

With the possibility of downed trees and damage to power lines, National Grid put 2,500 workers in place to deal with any damage. Customers are asked to report outages to the National Grid website. Outages may be tracked at National Grid outage center.