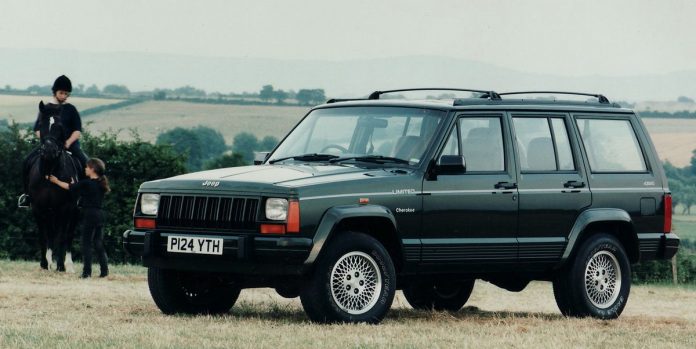 The Wrangler has long been the iconic Jeep. It’s the reason the Jeep brand exists; the Wrangler and its ancestors helped the Allies win the war and established the brand’s off-road credibility. But the Wrangler is not Jeep’s most influential vehicle. That honor goes to the more humble, not-always-Jeep Wave-worthy XJ-generation Cherokee, built from 1984 to 2001.

Jeep sold nearly three million XJ Cherokees. If you grew up outside wintry Detroit like I did, the XJ was ubiquitous. My parents had a Wagoneer model; my younger brother drove a Cherokee Sport; too many of my high school friends had them to bother enumerating. The XJ Cherokee was everywhere — even in Father of the Bride, as the practical companion to Steve Martin’s pristine Austin-Healey 3000.

One reason the XJ Cherokee become so popular was that it was ahead of its time. It was one of the first modern, compact sport utility vehicles that fused all-terrain capability, practicality and less-than-ogreish on-road manners. Thanks to successors/imitators like the Honda CR-V, Toyota RAV4, and Nissan Rogue, that template would become America’s default car. Upset that wagons have all but died in the American market? Blame the XJ Cherokee. After all, it was initially marketed as the “sportwagon.”

Another reason was the XJ Cherokee was brilliantly designed. Jeep gave it a simple, boxy design, and a strong and exceedingly durable engine (among a couple of less-notable powertrains). Despite not using a truck-based body-on-frame platform, the unibody Cherokee was also a capable and well-proportioned off-roader.

How awesome was the XJ Cherokee formula? When Chrysler bought Jeep in 1987, they inherited the XJ Cherokee…and kept it in the lineup for another 14 years.

The XJ Cherokee was ahead of its time

The best way to understand the revolution the XJ Cherokee wrought is to look at the vehicle it replaced: the SJ Cherokee. That SUV may inspire nostalgia now from the Bring a Trailer crowd, but the SJ Cherokee was a hulking, full-size, two-ton-plus, body-on-frame SUV. It featured enormous 5.9-liter and 6.6-liter V8s. The SJ looks cool, sort of like a smaller Grand Wagoneer — but it was the anthesis of the modern SUV.

The XJ, in contrast, was a revelation. It carried over the Cherokee name, but shrunk from a full-size SUV to a compact. It used a lightweight unibody construction instead of the classic body-on-frame —which meant the new Cherokee dropped about 1,000 pounds of curb weight versus the previous vehicle while keeping most of the same interior volume. The XJ had Jeep’s trademark all-terrain capability, but it was maneuverable on the pavement and accessible to a wide range of buyers.

The XJ Cherokee had a spectacular engine

AMC knew how to make an engine. In 1987, the XJ Cherokee received the 4.0-liter inline-six, which is one of the best they designed. Chrysler then added a fuel-injection system, and the result was legendary. That 4.0-liter produced formidable power and torque for the time: 190 horsepower and 225 lb-ft. For context, that was about 40 hp and 45 lb-ft over the concurrent Toyota 4Runner. The XJ was not a speed demon, but with that torque it was surprisingly quick off the line.

That 4.0-liter inline-six was also impressively durable. It could last for a long time — well past 200,000 miles — and often enough, outlast the original paint job, electrical components and body panels. Not many things in the automotive world last longer than the XJ Cherokee’s 18-year production run….but one of them was that 4.0-liter engine, which stayed in the Jeep lineup in the Wrangler until 2006.

The XJ Cherokee was (and is) a great off-roader

Yes, many people drove XJ Cherokees who wanted nothing to do with off-roading. But in 4×4 spec, the XJ was quite well-equipped for hitting the trail. As noted, it was comparatively lightweight and had a ton of torque; plus, it was stable, with a relatively long wheelbase for a short length. While it did ditch the traditional body-on-frame construction, it still kept Jeep features like the solid-axle front suspension setup and a legit low-range transfer case.

And it’s still an appealing off-roader today. Currently, it has one key attribute for off-roading the Wrangler lacks: it’s super affordable. Even meticulously-kept, low-mileage XJs have never eclipsed $25,000 on Bring a Trailer — and you can buy less well-kept ones for much less. That makes the XJ an ideal base to start accessorizing…and a car you aren’t necessarily concerned about bashing against a rock.

Our Girl soldier Fingers dies after being shot

Moving the Penguins to bubble city a massive endeavor for equipment...